Only one specialty doctor each in seven categories nationwide 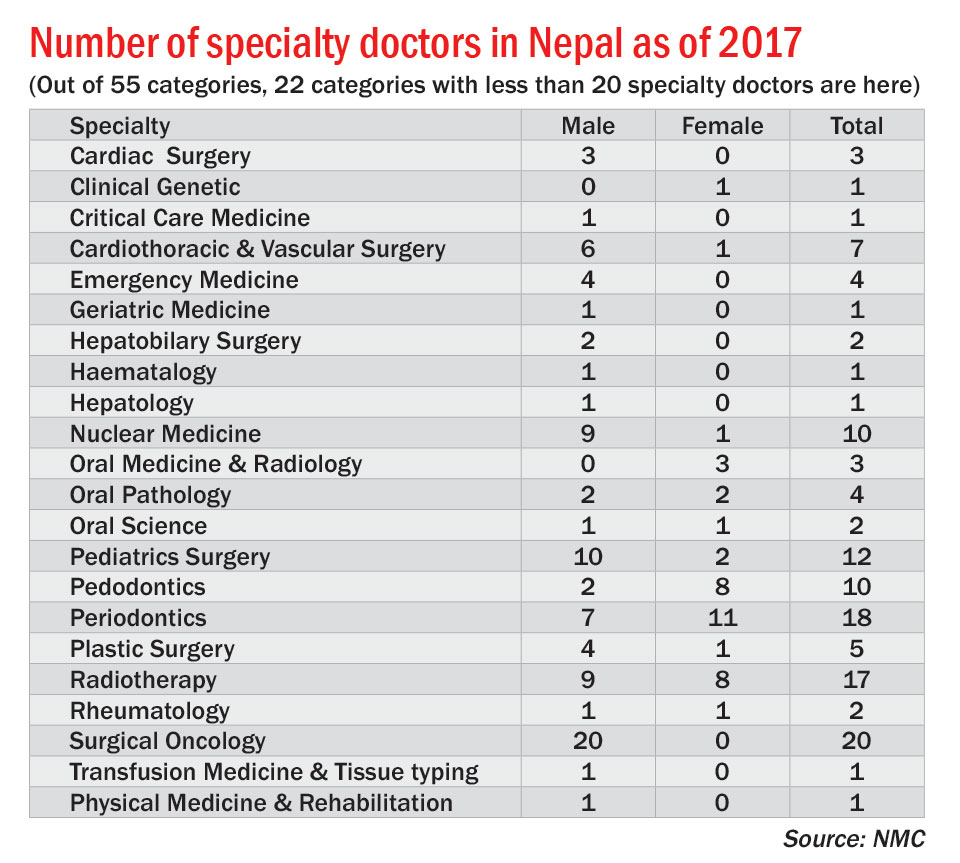 KATHMANDU, March 2: As Nepal Medical Council (NMC), the apex body of medical doctors in the country, marked its 55th anniversary on Wednesday, doctors and experts expressed worries over the lack of specialty doctors to provide certain specialized health services in the country. The number of specialty doctors, particularly under seven different categories, is very few, according to the data provided by the NMC.

The specialist doctors have been classified into 55 categories, according to the NMC.

There is only one doctor each across the country in each specialty category of Clinical Genetics, Critical Care Medicine, Geriatric Medicine, Hematology, Hepatology, Transfusion Medicine and Tissuetyping, and Physical Medicine and Rehabilitation.

Similarly, there are two specialty doctors each in Hepatobilary Surgery, Oral Science, and Rheumatology throughout the country. There are three doctors each in Cardiac Surgery and Oral Medicine and Radiology, four each in Emergency Medicine and Oral Pathology, five in Plastic Surgery, seven in Cardiothoracic & Vascular Surgery, 10 each in Nuclear Medicine and Pedodontics, 12 in Pediatric Surgery, 17 each in Radiotherapy and Endocrinology, 18 in Periodontics and 20 in Surgical Oncology.

According to the NMC, there are around 22,000 medical doctors registered at the Council. It means that the number of doctors is insufficient to provide health services to the 29 million plus people of the country.

The World Health Organization (WHO) has set a standard of a doctor per 1,200 population in order to provide the accessible health services to the people, said NMC officials.

NMC Registrar Dr Sharma said that the government is responsible for addressing the shortage of doctors by bringing policies to produce more doctors.

According to the Ministry of Health (MoH), there are about 70,000 health workers in the country. There must be 4.5 health workers including a doctor per 1,000 population as per the international standards. "We brought a policy a few years ago to encourage the willing doctors to study specialized areas by providing them scholarships in government medical colleges and health institutions, asking them to sign bonds to serve in government hospitals," said Dr Shree Krishna Giri, spokesperson for the MoH. "Many students prefer to study general medicine to specialization due to the lack of job security and comprehensive knowledge about the rare areas," he added. "Some specialists prefer to go abroad instead of serving the country."

Promise to decentralize Singha Durbar's power limited to slogan only

MUGU, August 24: Locals of Mugu district still remember how difficult it was for them to seek services from the... Read More...

KATHMANDU, Nov 14: The United Democratic Madhesi Front (UDMF), that has been piling pressure on the government to table the constitution... Read More...