Teacher barricades himself in class, fires gun; no one hurt 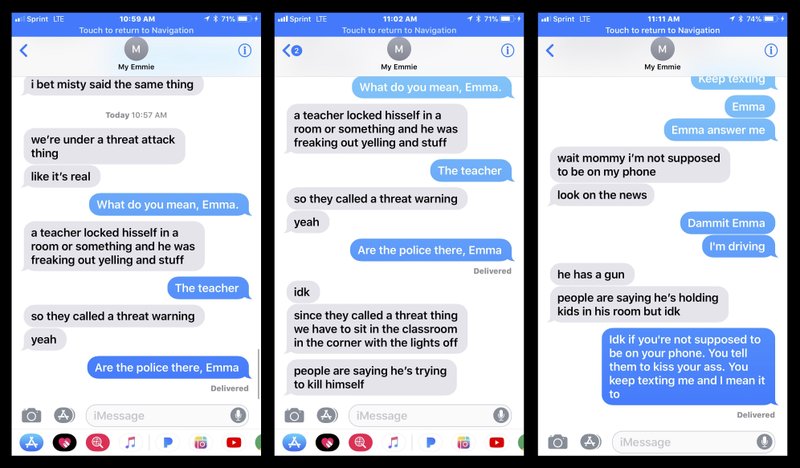 This combo image shows screenshots from a text conversation, starting from the left screenshot, between Emma Jacobs, a student at Dalton High School, and her mother Annmarie Jacobs in the midst of a mass shooting at the school in Dalton, Ga., Wednesday, Feb. 28, 2018. A social studies teacher barricaded himself inside a classroom at the Georgia high school on Wednesday and fired a handgun, sending students running outside or hunkering down in darkened gym locker rooms, authorities said. (Courtesy of Annmarie Jacobs via AP)

ATLANTA, March 1: A social studies teacher barricaded himself inside a classroom at a Georgia high school on Wednesday and fired a handgun, sending students running outside or hunkering down in darkened gym locker rooms, authorities said.

No Dalton High School students were in the classroom when the teacher fired the weapon, and despite the chaotic lockdown and evacuation, the only injury was a student who hurt her ankle running away.

It wasn’t immediately clear why the teacher, 53-year-old Jesse Randal Davidson, had the gun. Under questioning by detectives, he refused to discuss what led to the shooting.

The gunfire erupted with a nation on edge two weeks after a Florida school shooting left 17 students and faculty dead and ignited a new debate over gun control in America. Within minutes of the Dalton shooting, students there took to social media, calling for restricting gun rights. In the afternoon, President Donald Trump, who has advocated for arming teachers, convened a bipartisan group of lawmakers at the White House to address gun violence.

The teacher was taken into custody without incident after a 30- to 45-minute standoff with officers, police spokesman Bruce Frazier said. A teacher since 2004, Davidson also serves as the play-by-play announcer for the high school’s football team.

A social studies teacher barricaded himself inside a classroom at a Georgia high school on Wednesday and fired a handgun, sending students running outside or hunkering down in darkened gym locker rooms, authorities said. (Feb. 28)

Police noted that Davidson didn’t appear to want to hurt the students or faculty. He fired the gun at an exterior window when the principal tried to enter the classroom.

“I don’t know whether he was just firing the gun off to let people know to back off or what,” Frazier said.

The shooting happened about 11:30 a.m. during Davidson’s planning period. At first, students tried to get into the classroom, but they couldn’t. The students told the principal, who tried to enter.

“I didn’t get the door open very far, but he slammed the door and hollered ‘Go away, don’t come in here.’ He had some nonsensical noises that were made as well,” Principal Steve Bartoo said.

Bartoo returned a short time later and put his key in the door “and again he slammed the door before I could open it and he said, ‘Don’t come in here, I have a gun.’”

That’s when Davidson fired and the school was placed on lockdown, authorities said.

Davidson faces six charges, including aggravated assault involving a gun and terroristic threats and acts, jail records showed. Other charges include carrying a weapon in a school safety zone and reckless conduct. It’s not clear if he has an attorney.

Chondi Chastain told The Associated Press she was supposed to have Davidson’s class at 2:30 p.m.

“My favorite teacher at Dalton high school just blockaded his door and proceeded to shoot. We had to run out the back of the school in the rain. Students were being trampled and screaming. I dare you to tell me arming teachers will make us safe,” she tweeted in a post that was retweeted 15,000 times within hours.

She said Davidson himself had commented that arming teachers was a bad idea.

“I feel like there just shouldn’t be guns at school at all,” she said. “It’s our basic student right to feel safe at school and if (teachers were armed), I wouldn’t feel safe.”

Student Emma Jacobs texted her mother while she hid inside a darkened classroom, said her mother, Annmarie Jacobs. Emma, a junior, said in texts that her teacher had turned the lights off and told the students to sit in a corner.

Then, in an act that brought home the danger of the situation, Emma texted her mother, “omg she’s putting desk in front of the door.”

Nathangel Lopez hunkered down with students and teachers in a gym locker room. While there, he tweeted a photoof teens sitting on benches and called for more gun control.

“This shouldn’t happen to us,” he wrote. “I hope a lawmaker somewhere will do something.”

When he found out that a teacher was involved, he shifted his stance on arming educators.

“At first, I was thinking that that might have been a good idea. I am now totally against it,” he said.

Several students said on social media they were outraged that some on Twitter questioned whether the incident was staged.

Davidson was described as laid back and smart. In 2012, he was recognized as the school’s top teacher, The Atlanta Journal-Constitution reported . He moved to Dalton in 1995 and became sports and news director at WBLJ-AM radio.

“It was always about the students. He really wanted the students to understand the concept,” said 18-year-old senior Rowdy Zeisig.

The principal said Davidson was an “excellent teacher” who was well thought of, and “as far as I know he was fit to be at work.”

A week ago, police found a “threatening” note on the floor of a classroom at Dalton High, but it wasn’t related to the shooting Wednesday.

Threats have been made at schools across the country in the wake of the Feb. 14 shooting at Marjory Stoneman Douglas High School in Parkland, Florida.

Dalton has about 2,000 students, according to its website. It is located about 90 miles (145 kilometers) north of Atlanta.

Dalton is known as the Carpet Capital of the World, since much of the carpet for U.S. and world markets is produced within a 25-mile (40-kilometer) radius of the city.

Souls of my city: Teacher to vendor

Originally from Morang, 53-year-old Jeevan Bastola owns a garment stall in the street at Haugal, Patan. Having a brief experience... Read More...

BHAKTAPUR, Dec 21: The National Examinations Board is preparing to publish Class 11 final examinations results of by January 5. ... Read More...

Manchester United striker Zlatan Ibrahimovic has compared his footballing prowess to a fine red wine that improves with age, with... Read More...

Nepal’s trade deficit grew by around 25 percent to Rs 1.26 trillion in first 11 months of current FY
19 hours ago
As a Dalit girl is denied a room to rent, an int’l report highlights poor representation of Dalits in  state’s judicial, law enforcement agencies
13 hours ago