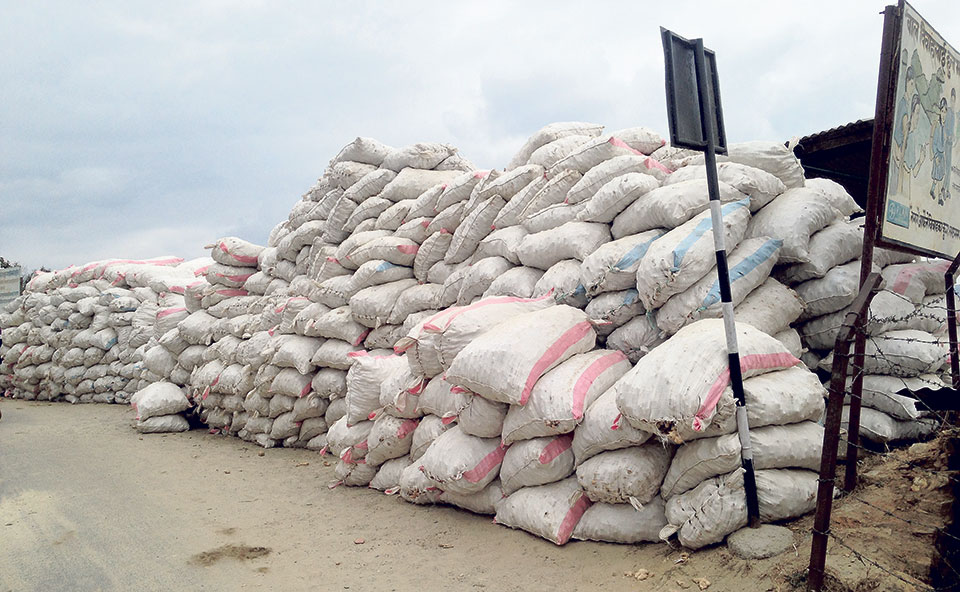 India-bound Nepali ginger stuck at Manglung of Terhathum three weeks ago, after India stopped receiving Nepali ginger without any definite reason. The non-tariff barrier, however, was cleared after India’s Minister for External Affairs Sushma Swaraj recently met with CPN-UML chair KP Sharma Oli in Kathmandu as an emissary of India’s PM. Ginger export was halted for about two weeks. Photo: Republica Files

KATHMANDU, Feb 11: Nepal’s ailing agriculture sector has yet another challenge to cope with, as assurance of 50 percent profits for Indian farmers by their government will have a negative impact on Nepali products, according to Nepali farmers and agricultural experts.

Most likely, products of Nepali farmers, who get marginal support or incentives from their government, will find it hard to remain competitive with those Indian products. Farmers even fear they will be driven out of profession.

While India announced minimum support price through its budget on February 2, Nepal’s government does not have such support price except for few products like sugarcane. Many farmers are forced to sell their produce at cheap rates. On top of this, there are middlemen who eat away farmers’ profits but the government does not pay little attention toward this sector that contributes a third of the total GDP.

The Indian announcement will have a direct effect on Nepal government’s policy of replacing import of agricultural products by boosting domestic production. The Indian plan aims to double its farmers’ income by 2022.

A total of Rs 400 billion worth of agro products was imported over a period of 6 months in the first half of current fiscal year ending mid-December. Few decades ago, Nepal used to produce agricultural items in abundance. The growth of import has increased leaps and bounds while the export has seen only a sluggish growth in recent years. The country has to pay the most of its hard earned foreign currency to import agro products.

It is now feared that cheaper Indian agro products having higher incentives can drive Nepali farmers out of farming as cheaper products from either country flush across the porous border.

“The protection of the Indian farmers by their government will have a severely adverse impact in Nepal’s agriculture sector and Nepali farmers will be the victims,” said a paddy expert, Bhola Man Singh Basnet, who is also former government bureaucrat.

Competition can happen only on equal-footing but it seems Nepali farmers will now have to run far behind Indian farmers with tied legs, added Basnet.

Pradip Maharjan, chief executive officer of Agro Enterprise Center, agricultural wing of Federation of Nepalese Chambers of Commerce and Industry, echoed Basnet. Maharjan said that they have long been lobbying for setting minimum support price of major crops to help them cope with the competitiveness of Indian products.

“The only off-season vegetables of Nepal, particularly of rainy season (June to August) have competitive advantage with the products of the southern neighbor. All others are already dearer,” added Maharjan.

The government of India has already been providing an array of incentives and subsidies for its farmers. The economy of scale is also larger for Indian farmers. Both these are factors contributing to competitive advantage for Indian products. Indian government has provided up to 90 percent subsidy on plastic sheds, up to 60 percent on irrigation and many other incentives, according to Maharjan.

Nepal’s agricultural sector has witnessed a severe blow with the exodus of Nepal’s active workforce to Malaysia and the Middle East, particularly after the Maoist insurgency began.

Maharjan further said, “The days ahead for Nepali farmers is horrible. The government may not be able to provide incentives like the Indian government.”

“Policy makers and planners with good track record are never consulted though the sector has witnessed a serious problem.” Laxmi Dhakal, president of Seed Entrepreneur Association of Nepal, said. “On average, Nepali farmers are now earning only 15 percent profits and the profits my further decline in the coming days.”

Few years ago, the government had announced to provide loans to farmers at subsidized interest rates, but it has not been implemented except for few big entrepreneurs, according to Dhakal. Farmers are further hassled and fleeced by middlemen particularly while purchasing seeds, chemical fertilizers, and other agricultural inputs. Dhakal is however hopeful that the new provincial governments will come out with some measures to support them.