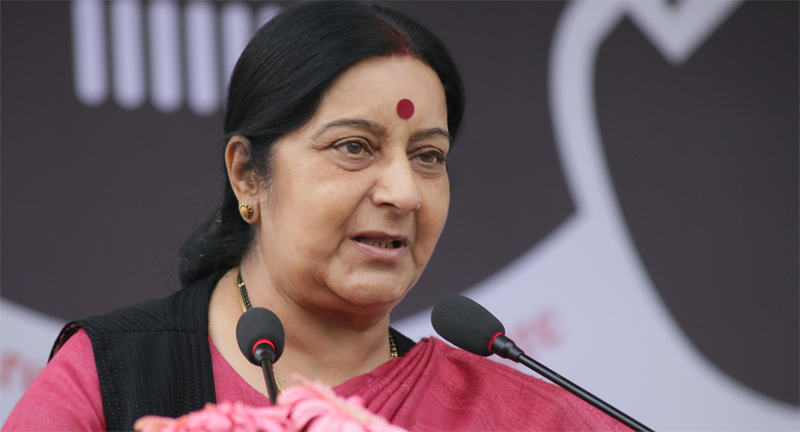 KATHMANDU, Jan 31: As Indian External Affairs Minister Sushma Swaraj prepares to arrive in Kathmandu on Thursday as the emissary of Prime Minister Narendra Modi, there is a cautious optimism in Nepal that the bilateral relations between the two countries would move smoothly even as the leftist parties are poised to form a new government.

Foreign affairs experts and political leaders see the visit of Swaraj at India's own initiative as a part of New Delhi's policy to engage the new government, most likely to be led by CPN-UML Chairman K P Sharma Oli - someone New Delhi has not had good terms in the recent past - as an attempt to give a message that New Delhi is ready to work with the government of any party configuration in Nepal.

They also describe New Delhi's conciliatory overtures as a move to ameliorate the relations with the UML, which has announced to deepen relations with Beijing with enhanced connectivity including through railway network. New Delhi's move has been interpreted as an attempt to nudge Nepali leaders against getting too close to the northern neighbor at the expense of New Delhi.

Former Nepali ambassador to India Prof Jayaraj Acharya believes that the visit of Minister Swaraj is the realization of Indian side that it needs to work with Nepal in Kathmandu's own terms to earn goodwill and trust from the Nepali people.

"It is a good note that India is making a conciliatory overture to improve relations with Nepal. It is a very positive sign. We should welcome the development," he said.
Nepal has had five parliamentary elections so far, but New Delhi had never taken this kind of initiative ahead of government formation in the past. While Indian Prime Minister Modi himself has called Oli, who is tipped off as the prime minister-in-waiting, twice already, his cabinet colleague Swaraj is visiting Kathmandu with his political message.

"No party has got clear majority in Nepal in this election. Although the left alliance comprising of UML and Maoist Center has secured majority, the alliance is not recognized by the Election Commission," said Former Foreign Minister Ramesh Nath Pandey.

"At a time when it is still not clear who is going to be the prime minister of Nepal, Prime Minister [Narendra] Modi has called Oli twice already and is also sending external affairs minister. This clearly shows that India has put its relations with Nepal on top priority," said Pandey.

Former Minister Pandey believes that the visit can be understood as an overture of New Delhi to correct its mistakes in the past and start Nepal-India relations afresh. "The visit can be expected to correct past mistakes and drive the relations between the two countries toward healthy direction. But in diplomacy what you see in surface may be different in substance," he further said.

Although a section of people and policy makers in Nepal have termed the visit "ill-timed", leaders of major political parties have described the visit as a positive gesture from India.
Senior Nepali Congress (NC) leader Prakash Sharan Mahat, who also served as foreign minister in the government led by Maoist Center Chairman Pushpa Kamal Dahal, said the visit should be seen as a part of the regular high-level political exchanges subsisting between Nepal and India.

"India has some security sensitivity attached with Nepal. As the communist parties are set to form a majority government, political leadership in New Delhi may have a desire to understand the feelings and thoughts of Nepali political leadership in the changed political context," said Mahat. "The visit reflects the importance India attaches to Nepal in its foreign policy.”

Analysts believe that New Delhi is wary of the new government's possible overtures to get too closer to Beijing as it was the Oli-led government which had reached a slew of agreements including free trade, transport, connectivity, and transit facilities with China in the backdrop of India's economic embargo back in 2015. There is a palpable concern among Indian politicians, policymakers and strategic thinkers that India's failure to engage the left government could further push Nepal into the arms of China.

Although Chairman Oli in his message on the occasion of the Republic Day of India recently wrote to Prime Minister Modi that he is eager to work with his government, he and his party's senior leaders have already given a strong message to New Delhi by visiting Rasuwagadhi-the only transit point operational with China - immediately after the recent elections, indicating that they are determined to implement the deals made with China that were shelved by the subsequent governments formed after Oli-led government.
"The visit [of Minister Swaraj] is also an indication of India's growing concern in Nepal," former ambassador Acharya further said.

KATHMANDU, Nov 2: Price of pulses and beans is expected to down in the coming days, trader say. Officials of Nepal Retailers... Read More...