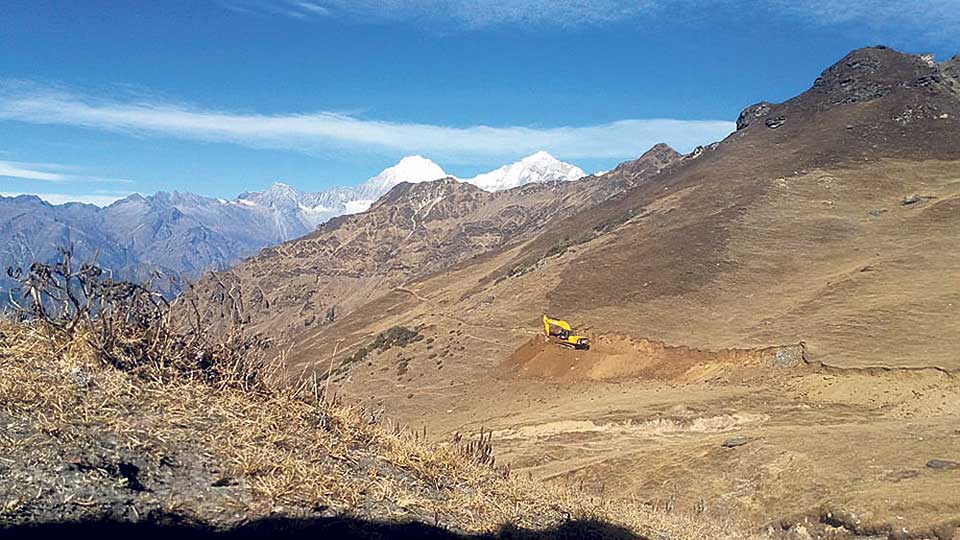 An excavator being used in constructing the Somdang-Pansang road section. Photo: Republica

DHADING, Jan 24:  "After waiting for ages, we will finally see vehicles plying on the roads of our own village. We are hopeful that this will change our lives to a great extent. It will make our living condition better," said Surjimaya Tamang of Rubi Valley-2, Tipling. Locals here have no other option than to walk for miles to access education, health and other facilities due to lack of road connectivity. While some can afford to charter helicopters during emergency, some die with illness. But with the prospect of road connectivity in the near future, locals here have finally breathed a sigh of relief.

"We spent all our lives in difficulties but we are happy that our children won't have to go through the same," said Surjimaya. Earlier, the locals used to walk for three days to buy food and clothes. They had to buy everything in stock so that they wouldn't have to make rounds of the district headquarters more than twice a year.

Even in this 21st century, the northern part of Dhading such as Lapa, Tipling and Setung are still untouched by roads. The crops and animal products produced in the villages get wasted in lack of availability of market. But with roads linking the villages soon, farmers are elated that their dream to sell their products in the market will finally come true. Some are still not able to believe that this is finally happening.

As the road digging project has finally picked up pace, villagers of Tipling are hopeful that they will soon get chance to travel in vehicles, informed Jas Thapa Tamang, one of the locals. A two-kilometer road has already been constructed from Somdang. The recently completed 7-kilometer road further up to Pansang has eased the transportation woes of the people living in the north. Works are underway to open track up to Labdung, which is the nearest settlement from Tipling.

Twenty-four years ago, the District Development Committee (DDC), Dhading had introduced a project to join northern Dhading with the district headquarters.  However, the plan is finally being realized now. Since the last 10 years, the DDC has approved a large amount of budget for the construction of roads. However, the budget was spent on repairing roads during monsoon and the construction of the road sections undertaken by the consumers' groups have not gained considerable gains.

Though the project started in 1993, it was halted for long due to political obstructions.
Rubi valley holds a great prospect for tourism development but lack of road connectivity had impeded its progress. But local representatives and people here are hopeful that tourism will flourish here after the completion of road construction project.

At War With a Virus
1 day ago

Govt struggling with recovery strategy amid looming uncertainties
52 minutes ago

IN PICS: Rhododendron forest remains silent amid COVID-19 lockdown in Panchthar
15 hours ago