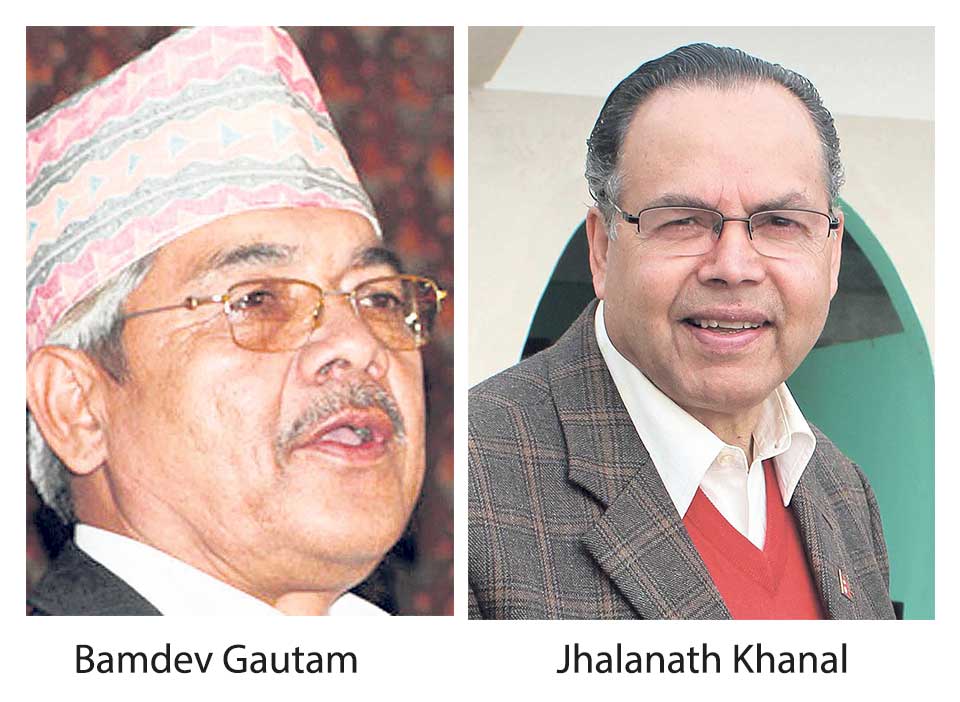 KATHMANDU, Jan 17: Former prime minister and UML senior leader Jhalanath Khanal and party Vice-chairman Bamdev Gautam have emerged as two frontrunners for president as the UML intensifies internal discussions to pick the party’s nominee for  the next head of state.

UML, the party which bagged the highest number of seats in the recently held parliamentary and provincial assembly elections, is seen as the favourite for deciding the presidency. It has staked its claim in a power-sharing deal between UML and the CPN (Maoist Center).

UML leaders said that the party leadership is choosing between Khanal and Gautam after another former prime minister and senior leader, Madhav Kumar Nepal, turned down an offer as the party’s nominee for the post.

The UML leadership had  initiated discussions to pick Nepal as the party’s nominee or give continuity to incumbent President Bidya Devi Bhandari, according to leaders,

Nepal rejected the offer while Bhandari’s hopes  for a second term were cut short by opposition from senior party leaders, according to those privy to developments.

“Analyzing every aspect, Khanal has a slightly better chance to be the party’s nominee for president. He is both willing and deserving and is looking for a graceful exit from active politics. Many leaders are in favour of giving him a chance,” said a senior UML leader.

Sources said  Bamdev Gautam has kept the presidency as one possible option even as he does not look as keen as Khanal to become head of  state. Despite being one of the most coveted positions after the prime ministership, the presidency is seen as a constitutional position suitable for those on the verge of retirement from active politics.

That is the reason why some senior leaders like Nepal and Gautam, who plan to remain  active in politics, do not look particularly keen to become president.

But party leaders said that Nembang’s chances are slim as many who want to climb the party ladder  consider the presidency an instrument for lightening its top-heavy  leadership with a graceful exit.

Factionalism has long remained a big problem in the UML, with several factions headed by former chiefs and senior leaders.

“Managing the top leaders is going to be very important to keep the party united. The management of the leadership will be even more important after the planned merger with the Maoists. That is why aspirants for party chairmanship are keen to provide a graceful exit to older leaders,” said one leader.