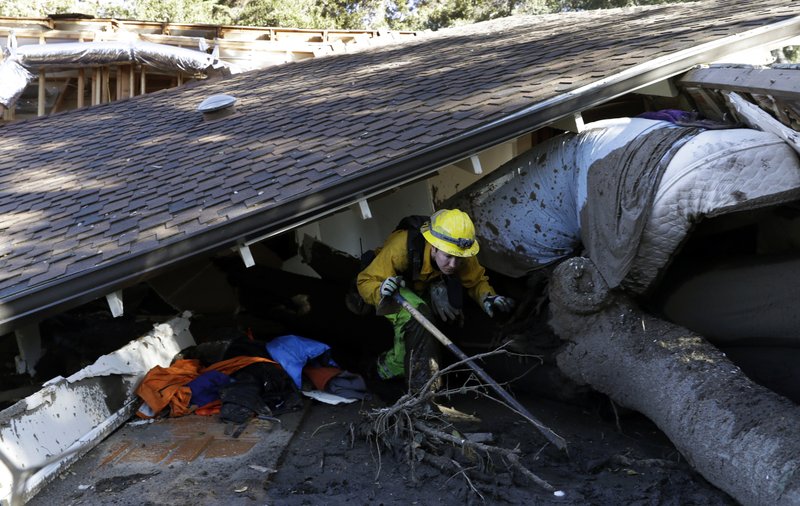 CALIFORNIA, Jan 14: The death toll from the mudslides in a California coastal town rose to 19 on Saturday but a man who had also been on the list of missing persons was located alive, authorities said.

The body of Morgan Christine Corey, 25, was found in mud and debris in Montecito, Santa Barbara County Sheriff Bill Brown said. Her 12-year-old sister, Sawyer, had been found dead earlier.

“We ask that you keep this devastated family in your thoughts and prayers,” Brown said.

Another person who had been on the list of missing, 62-year-old Delbert Weltzin, was found alive and well, Brown said without elaborating on the circumstances.

The two developments reduced the number of missing from seven to five.

“While every hour it remains less likely that we will find anyone alive, there is always hope,” the sheriff said.

The army of searchers and recovery workers in Montecito swelled to more than 2,000 five days after a powerful storm swept in from the Pacific and dumped a deluge on mountain slopes above the coastal enclave that were burned bare by a huge wildfire in December.

The backbreaking work went on in the summerlike weather that has made the stretch of Santa Barbara County coast about 90 miles (145 kilometers) northwest of Los Angeles a haven for the wealthy, celebrities and tourists.

“We have to do whatever it takes,” said Capt. Tom Henzgen, leader of a team from the Los Angeles Fire Department.

Long-range forecasts gave the crews about a week before the next chance of rain — and potential new mudslides — although the precipitation was expected to be disorganized and light. Another system was possible two days later.

Crews worked throughout the day Saturday to clear debris basins and officials said there was still a lot more work to be done. But Tom Fayram, the deputy director of the county’s flood control district, said the crews were making great progress and he was confident that at least a base level of water would be able to pass through the creek channels.

Much of the community of about 9,000 remained under mandatory evacuation orders, even unscathed areas, as crews both removed debris and worked to restore water, sanitation, power and gas. All warnings and orders for neighboring Summerland and Carpinteria were lifted.

Brown urged anyone in mandatory evacuation areas to leave immediately.

“It is not a safe or convenient place to be right now,” he said.

Tanker trucks sucked muddy water from flooded sections of U.S. 101, the only direct major artery between Los Angeles and the Santa Barbara region.

The California Department of Transportation abandoned an estimate of reopening the highway on Monday and said it was not known when the closure would be lifted.

Amtrak, which began restoring rail service two days after the flood, was adding cars to trains because of heavy demand. Two boat companies that normally take tourists out to Channel Islands National Park and on whale-watching excursions were ferrying people between the Ventura and Santa Barbara harbors.

Santa Barbara County said authorities were testing the ocean waters. Down the coast in Ventura County, environmental health officials warned that storm runoff can carry disease-causing bacteria and warned the public to avoid contact with ocean water until tests are reviewed next week.

In the disaster zone, searchers used chain saws and rakes to remove logs and sift through the remnants of what was left of multimillion-dollar homes. Crews with backhoes and jackhammers pulverized enormous boulders that were left when the torrents stopped.

Orange markings left on doors indicated which homes had already been searched.

In one of the hardest hit areas, a silver Mercedes-Benz, its front and rear fenders completely destroyed, sat atop a tree stump, the only thing left where a home once sat.

Rescuers said they would search every piece of debris and pile of dirt to look for the missing.

“This house is across the street now so we have to search these piles where people could’ve potentially floated into,” he said.

Each member of his team is given a section and must reduce any piles to ground level.

“We’re going to tear them apart piece by piece and search each pile thoroughly and make sure there’s nobody in there,” Henzgen said.

At a destroyed residence where mud-caked 14-year-old Lauren Cantin was rescued Tuesday hours after the early morning disaster hit, fire crews moved pieces of the roof, wood and concrete by hand as they looked for any sign of her missing 17-year-old brother.

The so-called Thomas fire, which led to the floods, was declared fully contained Friday. It erupted Dec. 4 in Ventura County and destroyed more than 1,000 structures as it swept through the city of Ventura and then threatened Carpinteria, Summerland and Santa Barbara. At 440 square miles, it became the largest wildfire in California records.

CALIFORNIA, Jan 15: Parishioners prayed Sunday for those killed and for families still searching for missing relatives in a Southern California... Read More...

Coronavirus infection confirmed in 38 people on Wednesday
11 hours ago