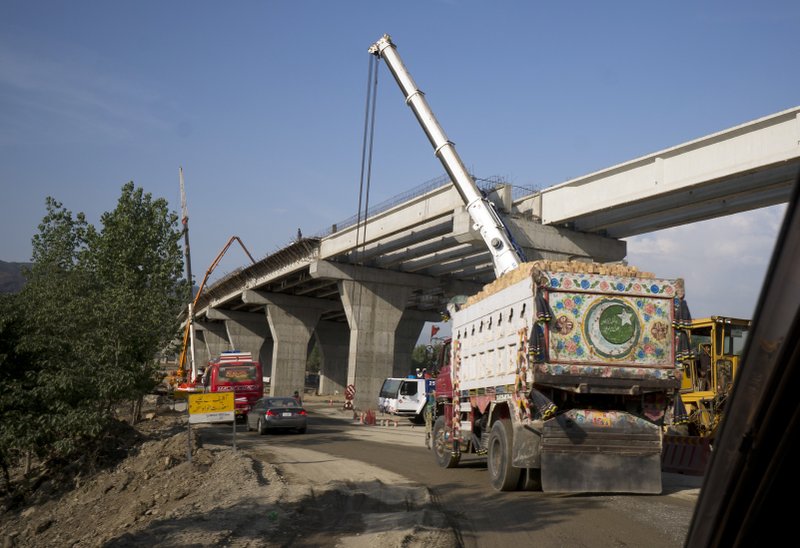 BEIJING, Jan 11: China’s plan for a modern Silk Road of railways, ports and other facilities linking Asia with Europe hit a $14 billion pothole in Pakistan.

Pakistan’s relations with Beijing are so close that officials call China their “Iron Brother.” Despite that, plans for the Diamer-Bhasha Dam were thrown into turmoil in November when the chairman of Pakistan’s water authority said Beijing wanted an ownership stake in the hydropower project. He rejected that as against Pakistani interests.

China issued a denial but the official withdrew the dam from among dozens of projects being jointly developed by the two countries.

From Pakistan to Tanzania to Hungary, projects under President Xi Jinping’s signature “Belt and Road Initiative” are being canceled, renegotiated or delayed due to disputes about costs or complaints host countries get too little out of projects built by Chinese companies and financed by loans from Beijing that must be repaid.

In some areas, Beijing is suffering a political backlash due to fears of domination by Asia’s biggest economy.

“Pakistan is one of the countries that are in China’s hip pocket, and for Pakistan to stand up and say, ‘I’m not going to do this with you,’ shows it’s not as ‘win-win’ as China says it is,” said Robert Koepp, an analyst in Hong Kong for the Economist Corporate Network, a research firm.

“Belt and Road,” announced by Xi in 2013, is a loosely defined umbrella for Chinese-built or -financed projects across 65 countries from the South Pacific through Asia to Africa and Europe. They range from oil drilling in Siberia to construction of ports in Southeast Asia, railways in Eastern Europe and power plants in the Middle East.

Other governments welcomed the initiative in a region the Asian Development Bank says needs more than $26 trillion of infrastructure investment by 2030 to keep economies growing. Nations including Japan have given or lent billions of dollars for development, but China’s venture is bigger and the only source of money for many projects.

Governments from Washington to Moscow to New Delhi are uneasy Beijing is trying to use its “Belt and Road” to develop a China-centered political structure that will erode their influence.

China’s significance to Pakistan as a source of financing increased following U.S. President Donald Trump’s Jan. 5 decision to suspend security assistance to Islamabad in a dispute over whether it was doing enough to stop Afghan militants.

“Belt and Road” is a business venture, not aid. A Cabinet official, Ou Xiaoli, told The Associated Press in April that lending will be on commercial terms. Beijing wants to attract non-Chinese investors, though that has happened with only a handful of projects, he said.

Among projects that have been derailed or disrupted:

—The European Union is looking into whether Hungary violated the trade bloc’s rules by awarding contracts to Chinese builders of a high-speed railway to neighboring Serbia without competing bids.

—In Myanmar, plans for a Chinese oil company to build a $3 billion refinery were canceled in November due to financing difficulties, the newspaper Myanmar Times reported.

There is no official list of projects, but consulting firm BMI Research has compiled a database of $1.8 trillion of infrastructure investments announced across Asia, Africa and the Middle East that include Chinese money or other involvement.

Many are still in planning stages and some up to three decades in the future, according to Christian Zhang, a BMI analyst.

“It’s probably too early to say at this point how much of the overall initiative will actually be implemented,” said Zhang.

The U.S. and Japanese governments express interest in building contracts or other potential “Belt and Road” opportunities for their companies. But they also are trying to develop alternative initiatives.

In November, the U.S. government’s Overseas Private Investment Corp. signed an agreement with Japanese partners to offer “infrastructure investment alternatives in the Indo-Pacific region,” according to a White House statement.

The stumbles for one of the world’s most ambitious infrastructure ventures could help temper concerns Beijing will increase its strategic influence.

“There is a big possibility that China is going to have a lot of disagreements and misunderstandings,” said Kerry Brown, a specialist in Chinese politics at King’s College London. “It’s hard to think of a big, successful project the ‘Belt and Road Initiative’ has led to at the moment.”

Even Pakistan, one of China’s friendliest neighbors, has failed to agree on key projects.

The two governments are developing facilities with a total cost of $60 billion including power plants and railways to link China’s far west with the Chinese-built port of Gwadar on the Indian Ocean.

A visit by a Chinese assistant foreign minister in November produced no agreement on railway projects in the southern city of Karachi valued at $10 billion and a $260 million airport for Gwadar.

The same month, the chairman of the Pakistan Water and Power Development Authority announced the Diamer-Bhasha Dam would be withdrawn from joint development. The site is in Gilgit-Baltistan in Pakistan’s far north, part of the Kashmir region, which also is claimed by India.

“Chinese conditions for financing the Diamer-Bhasha Dam were not doable and against our interests,” the official, Muzammil Hussain, told legislators, according to Pakistani news reports.

The Chinese Cabinet agency overseeing “Belt and Road,” the National Development and Reform Commission, denied in a written statement that it asked for an ownership stake. It said the two sides had held only preliminary talks about the project.

A Pakistani Cabinet official who spoke on condition he not be identified further said the Chinese side asked for clarification of the ownership status of the dam site because Gilgit-Baltistan has yet to be formally made part of a Pakistani province. The water authority didn’t respond to requests to clarify its chairman’s comments.

“Belt and Road” is interwoven with official efforts to export Chinese rail, hydropower and other technology and steel, aluminum and other industrial goods.

In Thailand, work on a $15 billion high-speed railway was suspended in 2016 following complaints too little business went to Thai companies.

After more talks over costs, technology sharing and land ownership, Thai leaders announced a new plan in July for a first line to be built from Bangkok to the country’s northeast. Building contracts went to Thai companies while China will supply technology.

In Tanzania, the government has reopened negotiations with China and another investor, the government of the gulf nation of Oman, over ownership of a planned $11 billion port in the city of Bagamoyo. The Tanzanian government failed to raise $28 million for its contribution, leaving it unclear what share the government might get.

Tanzania wants to make sure its people get more than just taxes collected from the port, said the director of the Tanzania Ports Authority, Deusdedit Kakoko.

“Land is for Tanzanians, and as the government we’re ensuring they get a share,” Kakoko said in an interview.

Despite such setbacks, Chinese officials say most “Belt and Road” projects are moving ahead with few problems.

Work on pipelines to deliver oil and gas from Russia and Central Asia is making “steady progress,” said a deputy commerce minister, Li Chenggang, at a Nov. 21 news conference.

“We have a lot of room for further cooperation,” said Li.

The state-run China Development Bank announced in 2015 it had set aside $890 billion for more than 900 projects across 60 countries in gas, minerals, power, telecoms, infrastructure and farming. The Export-Import Bank of China said it would finance 1,000 projects in 49 countries.

Acting as banker gives Beijing leverage to require use of Chinese builders and technology. But it can lead to complaints host countries fail to negotiate hard enough.

In Sri Lanka, the government sold an 80 percent stake in a port in the southern city of Hambantota to a Chinese state-owned company on Dec. 9 after falling behind in repaying $1.5 billion borrowed from Beijing to build it. That prompted complaints the deal was too favorable to Beijing.

“There is the perception of a Chinese incursion into their sovereignty by taking over the port,” said BMI’s Zhang.