Least health facilities in Province 6, most in 2 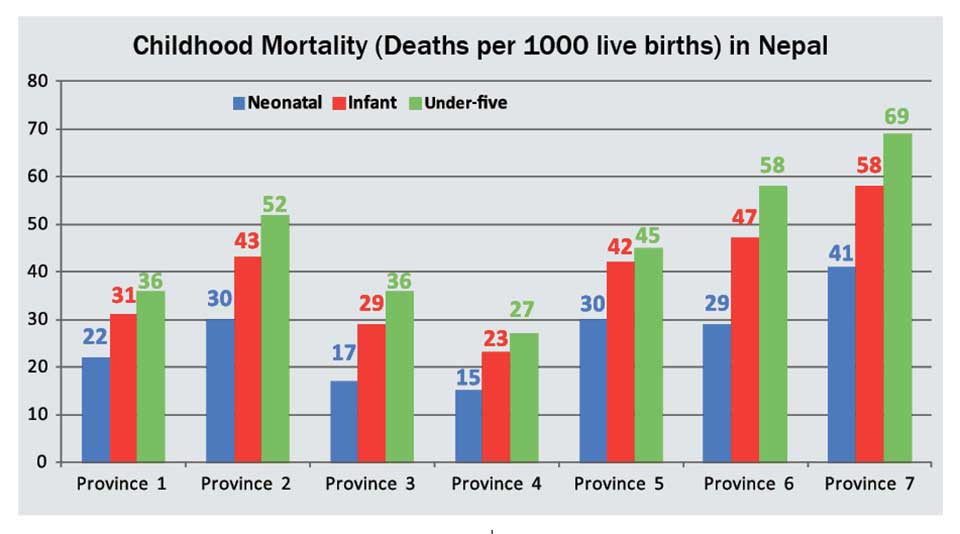 KATHMANDU, Dec 16: The availability of government health facilities  in the country remains the highest in Province 2,  and the lowest in Province 6.

Province 1 with a total population of 4,534,943 has 705 health facilities, including two tertiary hospitals, one teaching hospital, two secondary hospitals and 147 primary hospitals. The rest of them are health posts. The province has no specialized hospital.

Province 2, with a population of 5,404,145, has 789 health facilities including one tertiary hospital, one teaching hospital, three secondary hospitals and 126 primary hospitals. The rest of the facilities are health posts, and there is no specialized hospital in Province 2 either.

Province 6 with its population of 1,570,418 has 362 health facilities including one tertiary hospital, one teaching hospital and 80 primary. The  rest of the facilities are again health posts. There is no other category of  health facility in Province 6.

Province 7, with a population of 2,552,517, has 403 health facilities. These include one teaching hospital, one tertiary hospital, one secondary and 90 primary, the remaining being health posts. There is no other hospital in Province 7 either.

Shambhu Kafle, an official at the Federalism Implementation Unit of MoH, said  they are working to restructure the administration of health facilities at the ministry and in the provinces. “There will be at least one primary hospital of 5 to 100 beds in each of the 753 local bodies across the country,” he said. “We have to open other specialized and teaching hospitals in the provinces where such facilites do not exist now,” he added. “Each of the wards in the local bodies will have at least one health post.”

Officials at  MoH said that not all  the wards  have at least one health post. “There are some local bodies without primary hospitals either,” they said. “The  availability of health professionals  in many of the health facilities is quite disappointing.”

There are 159 private hospitals, nursing homes and clinics in the country. However, most of these are located in the city areas and are for-profit.

This disparity emerges from the Nepal Demographic Health Survey 2016. It also shows that child health and mortality are more precarious than other health parameters across the country.

The government has allocated Rs 31.78 billion in 2017/18 for the implementation of health programs, excluding the expenses for primary health services to be allocated in the local bodies as per the federal constitution. There are around 35,000 posts for health workers and medical professionals, including about 1,500 doctors, at  government health facilities.

Nepal's politics is in a serious and sensitive situation: NCP General Secy Chand
10 minutes ago