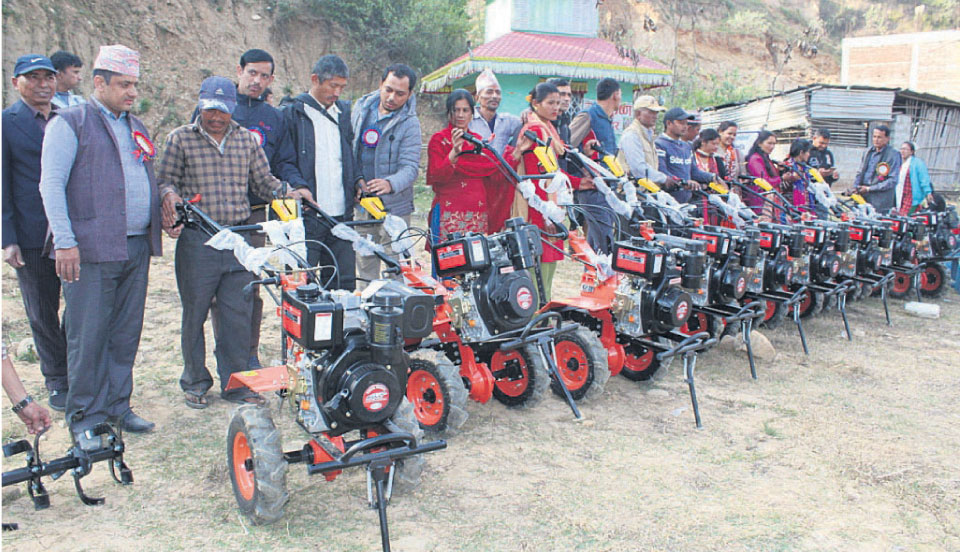 Farmers of Gajuri, Dhading attend a function organized by the District Agriculture Office for handing over the power tillers to them in this recent photo. (Sarita Shrestha/Republica)

DHADING, Dec 5 :It would take months for Kanchha Praja a Gajuri based farmer to plough his fields until four years ago.  From early morning to dusk, he had to plough the fields with his oxen. However, that changed one day when he received tractor that was small but very powerful and efficient. It changed the way Praja used to work on his farms. “Farming has become way easier due to the machine,” he shared.

After he switched to the tractor from oxen, it took just two days for him to plough his entire field. Not only that, the tractor was able to plough even the part of his farm that could not ploughed by the oxen due to navigational problem.
“Some of the farms were too narrow for the oxen to plough and we had to live them barren. Now, we cultivate seasonal crops thrice a year even in those narrow farms. We mostly cultivate paddy, maize and wheat along with doing vegetable farming in majority of our farms,” he narrated.

Elated Praja states that it takes just half an hour for the tractor to plough the field perfectly. To plough the same area, it would take hours for the oxen.
“I used to start plough farms field in June and continue plough up until September. With the help of tractor, I finish it within some days. It has indeed given us a new life in terms of farming,” he said.
Like Praja, Gajuri farmers are full of praise for the machine, as it has made their work easier while also increasing their productivity. Many of them recollect instances where they used to leave their land barren in lack of labor or oxen to plough. They would struggle to find people to help them to plough the farms but would give up later.

“Finding labors to work in farms had become the most challenging task in the later years. Every other person is flying to the foreign countries to work. Only a few people were around to ask for help. Because of the labor crunch many of us were forced to leave our land unused,” Praja narrated. “Not just me, there are dozens of other farmers. It was due to the unavailability of laborers and similarly, even finding oxen on time was not easy,” he added.

District Agricultural Office in Dhading said that the tractors were availed to to farmers to boost their professional farming capacity. “We provided tractors to farmers as per their demand. It helps them in growing seasonal and unseasonal crops, vegetables, fruits without the need of depending on animal or human force to plough the fields,” said Keshav

Devkota, senior officer at the office. “Tractor is giving them very good return as it uses less labor and is more productive. Since they have been received well, tractors should now be fully adopted as part of modern agriculture across the country,” he added.

He stated that farming for many of the district’s resident was a means of survive. With the new machinery and modern farming techniques availed to them by various government and non-government organizations, most farmers are now involved in professional farming.

“The more we make farmers proficient in the use of modern farming techniques and equipments, the more productive we will be. It is high time that we ensure that our farmers across the country have access to basic modern farming facilities and resources,”

Devkota asserted. According to him, the district office has a goal to avail the equipment to all the farmers of the district in the years to come. “We have also been providing soft loan to farmers to encourage them to buy necessary tools that they need to improve their agricultural productivity,” he added.

Tika Kumari, president of Ama Samuha (mother’s group) of Jalapadevi stated that the group’s member farmers hire the tractor whenever they require it. “Farmers pay certain fees for using the tractor. This fee is used by the group to pay for the tractor’s maintenance,” she said. “This has given a very big relief for farmers. Or else, most of us were about to give up farming,” Kumari stated.

Federal Democratic Republic came through the sacrifices of martyrs: PM Dahal
55 minutes ago