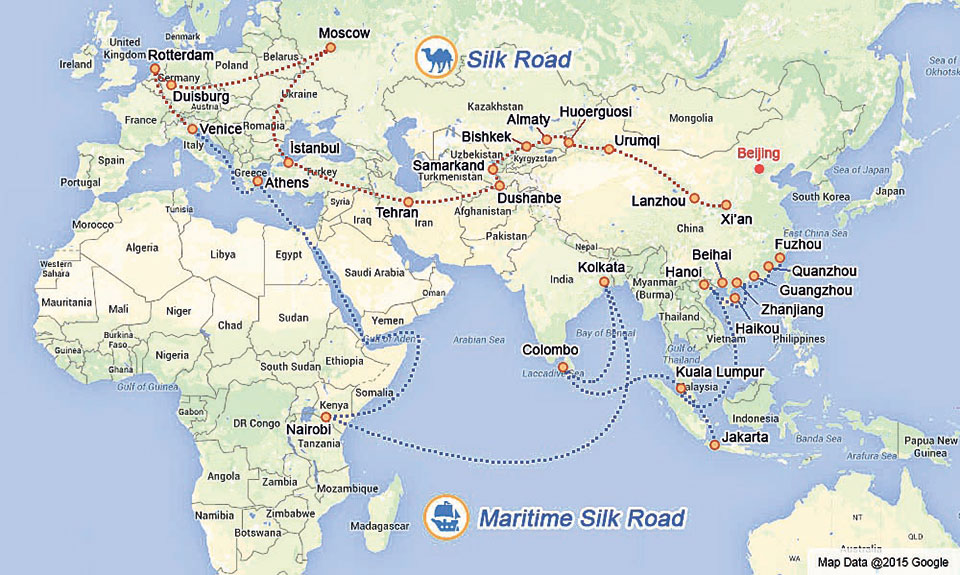 KATHMANDU, Dec 3: A preliminary list of road, railway, transmission line, and drinking water projects has been proposed for the projects under Belt and Road Initiatives. The Ministry of Physical Infrastructure and Transport (MoPIT) has identified six north-south road projects connecting both India and China, besides Kathmandu-Kerung railway project.

The BRI is China’s plan to restore the ancient Silk Road for promoting trade and economic integration between Asia, Europe, and Africa.

The six identified road projects are: Hilsa of Humla to Jamunaha of Banke, Kora La of Mustang to Bhairahawa (310 km), Kodari to Birgunj (390 km),  Lapcha of Dolakha to Bhiththamod of Mahottari (301 km), Kerung to Thori (190 km), and Kimathanka to Biratnagar (about 300 km).

Rajendra Raj Sharma, spokesperson of MoPIT, informed that these were the possible projects identified for utilizing the BRI investments received from China.

Chinese technicians, who were in Nepal for the site visit of proposed Kerung-Kathmandu railway two weeks ago, had also shown interest in these six roads, according to Sharma.

Building these roads came into government priority since the time of Indian blockade two years ago, which had brought about severe shortage of fuel and essential supplies in the country. The projects, if implemented, will allow Nepal shift its over-dependency of trade with India. These roads will also enable Nepal become a bridge between India and China.

On November 25, the ministries were given a five-day deadline by finance secretary Shankar Prasad Adhikari for proposing projects to put in the BRI programs. The finance secretary is the chief of Project Development and Coordination Committee for BRI.

These projects are of preliminary selection and a meeting led by Finance Secretary Adhikari will organize rounds of discussions to pick viable projects out of theses and will propose the final list of projects to BRI for further processing.

The final project ideas will be sent for feasibility study and preparing detailed project report for implementing the projects, according to government officials. Nepal had signed a BRI agreement with China in May.