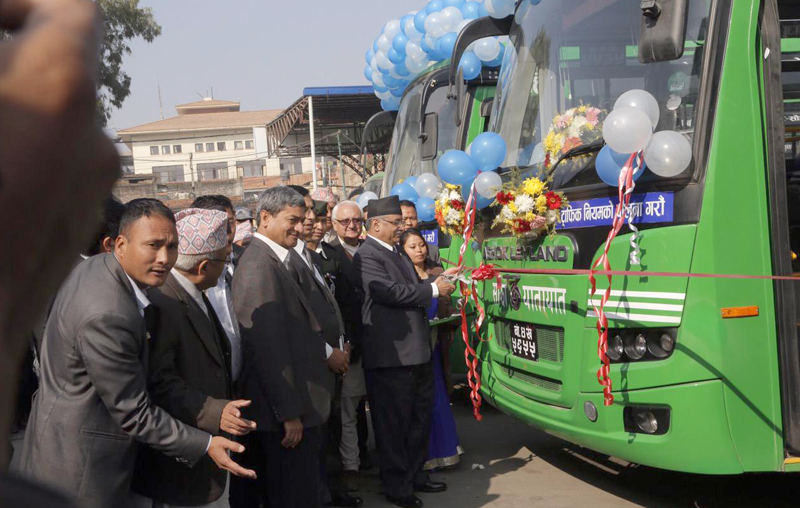 KATHMANDU, Nov 27: Sajha Yatayat is going to ply 30 more buses in the Kathmandu Valley from Sunday (today). Prime Minister Pushpa Kamal Dahal inaugurated the launching of the new buses amidst a ceremony organized at Sajha Yatayat’s office, Pulchowk, around 9 the morning.

Now, Sajha has a total of 46 buses. Thirty eight buses will be serving in the Kathmandu Valley and 8 buses outside the valley on long routes.

The new buses are disable-friendly and were bought by the company a few months ago with an assistance of Rs 100 million by the Kathmandu Metropolitan City (KMC) with the hope to improve public transportation in Kathmandu.

“The KMC had bought Sajha shares worth Rs 100 million,” Metropolitan spokesperson, Gyanendra Karki said, “To serve the general public, we asked the company to buy new buses from the same money. The people will now find Sajha buses every five minutes on the routes Sajha buses ply.”

The buses have 4 routes in the Kathmandu Valley.

Officials at the Sajha Yatayat said that each new bus has 40 seats and is disable friendly as well.
The buses have two doors each. The back door can carry wheelchair inside the bus and the officials believed that it will give great respite to the differently able people during their travel. The passengers can also charge their mobiles inside these buses.
These buses have features like automatic doors, CCTV cameras and TV screens. Likewise, the officials claimed that at least 100 passengers can travel in each bus

The routes outside valley are Baglung, Kathmandu-Gorkha, Kathmandu to Bhairawaha, and Kathmandu to Birgunj. Sajha has been running these routes since October 2.

To operate outside the valley, Sajha is said to be prepared to add 10 deluxe buses. Director Pandey informed Republica Online that the Sajha Board of directors has already endorsed the decision to add the deluxe buses. He also added that they have planned to launch Semi low floor bus.

Sajha Yatayat to add 10 more buses to its fleet

KATHMANDU, Nov 13: The Sajha Transport has continued its services even today. The CPN (Maoist) has called the transport strike... Read More...