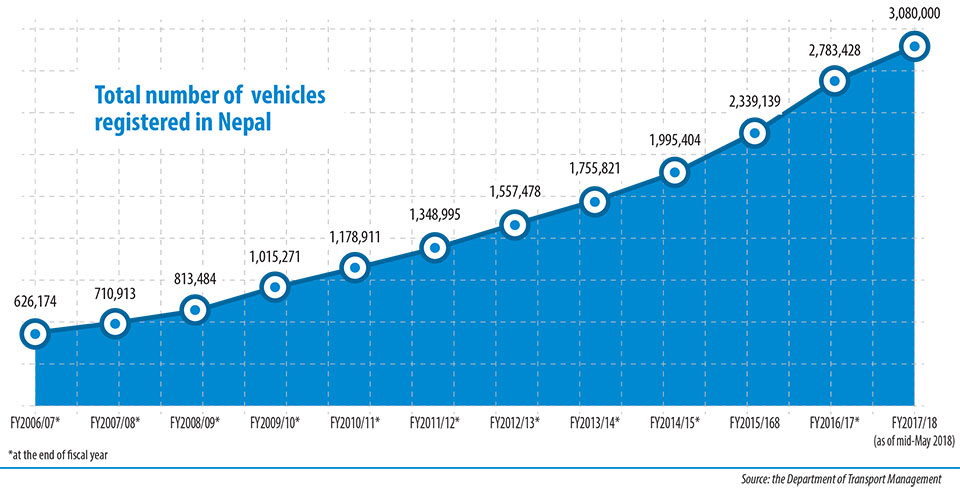 KATHMANDU, July 4: The total number of motor vehicles plying across the country reached nearly 3.1 million as of mid-May, according to a data of Department of Transport Management (DoTM).

The number is increasing with each passing month due to surge in number of private vehicles and vehicles used by construction industry. With the addition of around 300,000 motor vehicles in the current fiscal year, the number of motor vehicles in the country has reached 3.08 million as per records maintained by the Department of Transport Management (DoTM) by the end of Nepali month of Baisakh, 2075 BS.

The surge in registration of new vehicles is due to expansion of road networks in rural areas, increasing trend of owning private vehicles and increasing purchasing capacity of people, according to Tulsi Ram Aryal, the spokesperson for the DoTM. “The number of private motor vehicle has increased at a healthy rate,” he added.

According to the department, new registration of motor vehicles has multiplied by five times compared to the past decade. While only 88,735 motor vehicles were registered in FY2006/07, the number climbed to 444,259 units in FY2016/17, the data shows.

One of the reasons behind such a huge leap in registration of private motor vehicles is the poor public transportation infrastructures in the country. Both poor public transportation infrastructure in the city areas and expansion of gravel roads in rural areas is contributing to a rise in the number of motor vehicles across the country.

According to Nepal Automobile Dealers Association (NADA), the automobiles sector is contributing Rs 100 billion worth of taxes to the treasury every year.

Of late, Nepalis are developing a taste for luxury cars. Cars costing as much as Rs 50 million are seen plying the city roads. These cars are usually used by business persons, diplomatic missions, renowned bankers, and high ranking officials of corporate houses.

KATHMANDU, Feb 6: The government is going to introduce embossed number plate system for automobiles from next year. The Department... Read More...

KATHMANDU, Aug 25: The Department of Transport Management (DoTM) is to take action against vehicles, operating their service from Kathmandu... Read More...