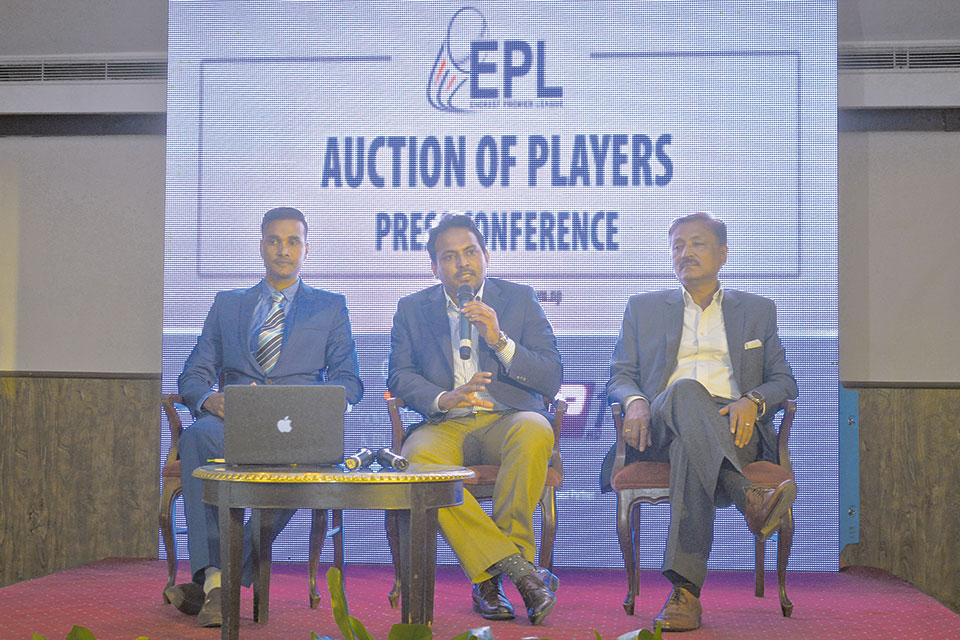 Founder of Everest Premier League Aamir Akhtar (center) speaks during a press meet organized after the auction of the players in Kathmandu on Monday. Photo Courtesy: Bijay Gajmer

KATHMANDU, Oct 24: Auction for the upcoming Everest Premier League (EPL) has been conducted in Kathmandu on Monday. A total of 90 players were kept in the auction for the tournament that will feature six city-based franchise teams from across the country.

Although 160 players had registered their names for the auction, the tournament technical committee led by former national team skipper Binod Das had selected 90 players from the pool, categorizing them into A, B, and C.

The tournament’s six teams including Bhairahawa Gladiators, Biratnagar Warriors, Chitwan Tigers, Kathmandu Kings XI, Lalitpur Patriots, and Pokhara Rhinos picked 10 players each from the auction. There was a provision of picking of 10 players from the auction spending up to Rs 1 million.

Each team, to be led by one marquee player, will have a 15-member squad comprising of 10 players coming from the auction, three foreign players, and one local player.

Likewise, Lalitpur Patriots is owned by Kishore Maharjan and Gyanendra Malla is its marquee player, while Pokhara Rhinos’ owner and marquee player are Shahil Agrawal and Shakti Gauchan respectively.

Republica Morning Brief: Sept 27
9 hours ago
Regulator makes yet another promise for strict market monitoring during festivals
9 hours ago