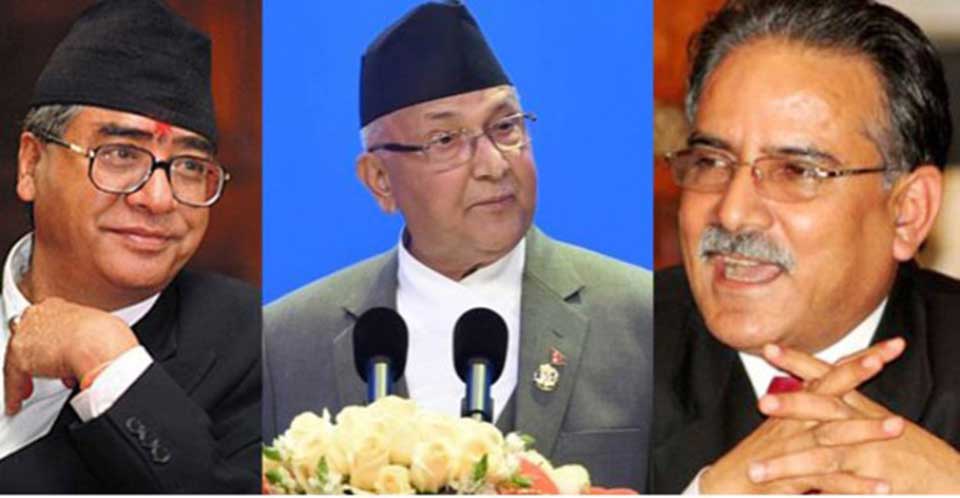 Deuba says he has got the 'go ahead' from EC, President.

KATHMANDU, Oct 15: CPN-UML Chairman KP Sharma Oli has strongly objected to the prime minister's move to appoint eight more ministers in 'violation' of the election code. The prime minister, however, wasn't touched by his objection.

Oli, who was addressing parliament's last meeting on Saturday, came down heavily on Prime Minister Sher Bahadur Deuba for “blatantly breaching the election code and the instructions from the Election Commission (EC).” Oli termed the prime minister's move unconstitutional, unethical and immoral.

"We have a serious objection to the prime minister's move of adding new ministers at a time when the election processes have already started and the government is being converted into a caretaker one," said Oli repeatedly asking Deuba why he expanded the cabinet size to 64 members.

Parliament has ceased to exist from Saturday as per the constitutional provision that states the term of the House would end a day before the nomination of the candidates for the election of House of Representatives.

He asked Deuba to withdraw the names of the proposed ministers before they are sworn in.

The prime minister, however, said since he has already received the "go ahead" for cabinet expansion from both the EC and the President, his plan to expand the cabinet and other processes would move ahead smoothly.

Oli accused the prime minister of expanding the cabinet despite that the EC writing to the government twice asking the latter not to do so as such a decision would directly violate the election code.

Oli also told parliament that he had drawn the President's attention toward the matter. "I have told the president that this [cabinet expansion] is objectionable and is in violation of the election code," he said.

The prime minister, however, said that he has already received the 'go ahead' for cabinet expansion from both the President and the EC.

"The EC has already told us that the cabinet expansion wouldn't affect the election process. So I thank both the President and Ayodheeji [chief election commissioner Ayodhee Prasad Yadav] for the support," said Deuba.

Deuba described the cabinet expansion as a regular constitutional business of a prime minister. "The number of ministers may sometimes increase while it may also decrease as needed. You may hear about decreasing the number of minister in a few days."

Oli, on the other hand, argued that if a government in European country would have done so, people in such developed societies would have expressed shame.

Deuba, who was seen aggressive while responding to Oli's questions, answered the rival leader in two minutes while Oli spent around 30 minutes of his 48-minute speech to criticize Deuba's move to induct new ministers.

CPN (Maoist Center) chief Dahal, however, spent most of his time describing parliament's success to promulgate the new constitution.

Instead of criticizing the prime minister for adding new ministers to his cabinet, Dahal defended the latest development of forming the left electoral alliance between his party and the UML.

Dahal described in length how he faced a tremendous pressure against the promulgation of the new constitution by the second Constituent Assembly (CA) and accommodate the concerns of various ethnic and marginalized communities.

"This is in line with the universal democratic practices and peaceful politics practiced around the world," said Dahal. He also urged the international community not to get "alarmed unnecessarily by rumors."

Speaker Onsari Gharti while declaring the conclusion of parliament's last meeting appreciated the then Prime Minister Sushil Koirala, who had headed the government at the time of constitution promulgation, and the then CA Chairman Subas Nembang for their role in accomplishing the historic task of getting the new constitution written by an elected CA.

Addressing the same meeting, leaders from Madhes-based political parties expressed hope that their grievances will be addressed by the to-be-elected parliament.

Chiefs of all the political parties represented in parliament addressed the final sitting of the legislature.