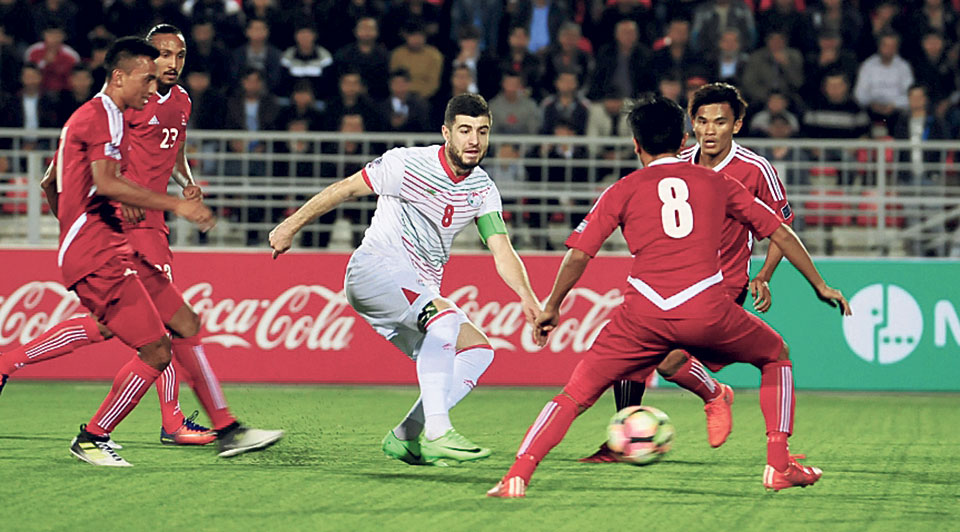 KATHMANDU, Oct 12: Nepal had made a disastrous start to the AFC Asian Cup 2019 Qualifiers facing 4-1 defeat to the Philippines in its first match on March 28 in Manila.

Early red card to the midfielder Bikram Lama and Rabin Shrestha sustaining injury were other talking points of that match which resulted in Nepal’s worst start to the continental qualifiers.

After snatching a point from Yemen in the qualifiers, Nepal had an opportunity to build up the momentum as Gyotoku Koji’s side was taking Tajikistan on the home ground.

Tajik team was coming to Kathmandu facing two consecutive defeats in its first two matches against Yemen and the Philippines.

However, winless Tajikistan succeeded to gather first three points in the competition to keep its qualification hope alive. Tajik players found the net twice in space of five minutes at ANFA Complex, thanks to defensive errors committed by Nepali players.

Nepali team which travelled to Tajikistan this week searching first of the tournament had a mountain to climb at Hisor Central Stadium. But once again individual errors from the Nepali players contributed to Tajikistan’s easy 3-0 win. Tajikistan’s all three goals came from the spot after Ananta Tamang committed two penalties in either half and Aditya Chaudhary gifted another at the end of the match.

Eventually, Nepal’s slim hope of remaining on the top two of Group F has ended while Tajikistan has leveled the points (6) with second-placed Yemen in the table led by the Philippines with eight points.

“We committed mistakes to concede all three goals from penalty kicks. We lost the match due to worst performance from our defense,” said Koji after the loss against Tajikistan.

One of the reasons behind Koji’s decision to change the playing formation from 4-4-2 to 3-5-2 was to bring stability in the defense side. But still the team couldn’t prevent the goals. The individual errors were the reasons behind the conceded goals rather than the tactics of the team.
Koji changed the system but couldn’t change Nepal’s fortune.

New system, same mistakes
Several clubs including Juventus and Chelsea in European leagues have won the trophies playing three central halves at back. In this season as well, many top clubs are using 3-5-2 or 3-4-3. A team must have the suitable players to execute such playing system. But has the Nepali team such suitable players in its bag? It is debatable.

A formation featuring three central halves at the back cannot be taken as an out and out defensive formation.

In this strategy, the two wing backs drop in and form a back line of five during the defending phase. While defending, central defenders mark the opponent players zonally and they also have to keep calm in one-versus -one situation.

However, Nepali defenders failed to mark the Tajik attackers zonally and had to commit reckless fouls to stop the opponents which eventually gave the home team three penalties.

When playing with a back three, it is vital that the wingbacks must be equally balanced both in defensive as well as offensive play. Koji had converted striker Bharat Khawas and winger Sujal Shrestha into the wingbacks who failed to offer effective protection to the defenders. Basically the attacking-minded fullbacks are given the wingback role but Koji’s decision of doing so with striker and winger didn’t work. Skipper Khawas and Shrestha struggled to adopt the role and failed to contribute the team with the crosses and provide final third passes from the wings.

Koji brought off Karki in 51st minute for Nawayug Shrestha but lack of service from the midfield, substitute striker also failed to make substantial difference.

Most of the players in the current squad including defenders Ananta Tamang and Aditya Chaudhary are young. These young players are in the development phase so the mistakes from them are obvious. Young players learn with their mistakes in their playing career.

But they must be given enough playing time so that they can learn from their own mistakes and become mature players.

Since no league and other top level domestic competitions is taking place in Nepal for years, players have been playing international matches relying only on trainings just ahead of tournaments.

If league and other top level competitions were taking place regularly in domestic football, these young players would have made enough mistakes in order to grow into mature players.

To be prepared for the international competitions, these players must get the opportunities to play enough football in domestic structure.

As long as players are compelled to be prepared for such top level international tournament merely on the basis of training camp, Nepali football fans will keep hearing news of repeated losses of their team.