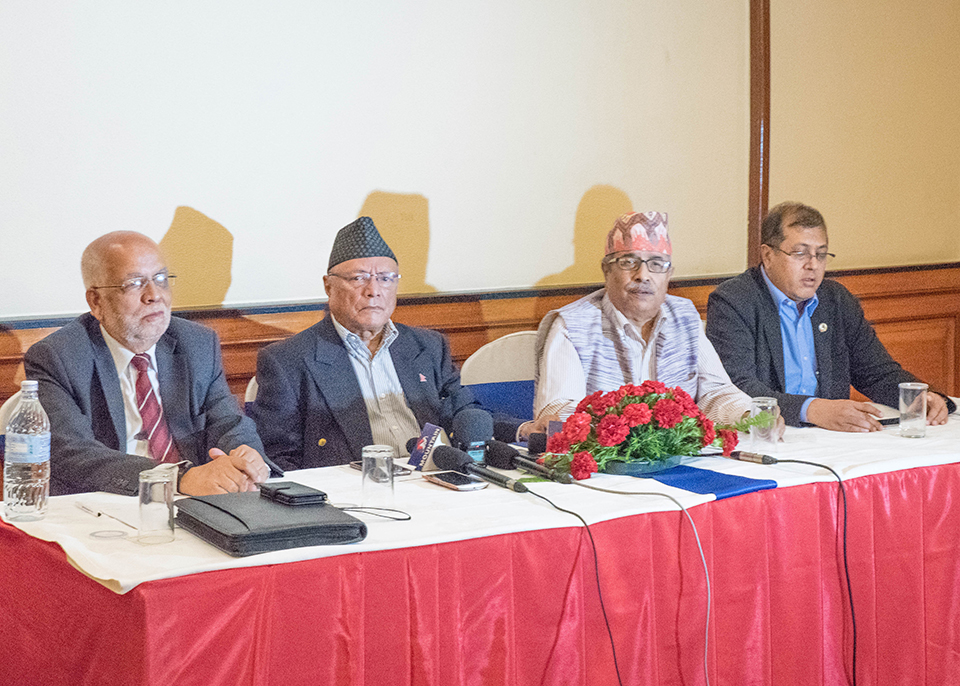 Neither 1950 treaty nor any other agreement between the two countries provides for border regulation.

In its fifth meeting held in Kathmandu, the two sets of Eminent Persons’ Group (EPG) from Nepal and India are reported to have discussed a wide range of issues related to the 1950’s Treaty of Peace and Friendship, including border management and security. EPG Nepal coordinator Bhekh Bahadur Thapa later informed that the treaty won’t remain the same. He suggested that there could be a compulsory provision of identity cards for Indians and Nepalis traveling to each other’s country by air, and deliberations were underway for similar provision for those traveling via land routes.

The recent meeting has reinforced a point of the 1983 border and migration report prepared by the task force led by late Harka Gurung. It had included the provision of regulating India-Nepal border and compulsory work permits for Indians in Nepal.
Neither 1950 treaty nor any other agreement between the two countries provides for border regulation. Likewise, the trade agreement has identified routes for mutual trade but there is no agreement on routes for movement of people. As a result citizens of both countries have been moving freely into each other’s territory, from any point along the 1,751 km-long open border.

The 1950 treaty kept Indo-Nepal border open. Indian and Nepali nationals could move freely across the border without passports or visas and they could also live and work in either country. This has to be corrected. If Indians come to Nepal in droves, the country could find itself inundated by Indian people. Many other bilateral issues need to be sorted out. This includes border disputes, trade and transit, hydropower, irrigation, encroachment and inundation of Madhes.

Kalapani (400 square kilometers) and Susta (140 square kilometers) are Nepali territories that India has encroached, apart from such encroachment in 52 other places. A dispute surfaced in 1997 when the Nepali parliament considered a treaty on hydropower development on Mahakali. In 2015, Nepal objected to the agreement between India and China to trade through Lipu-Lekh, a mountain pass in the disputed Kalapani area, as this violated Nepal’s sovereign right over its territory.

Nepal, India and China share two tri-junction points—Kalapani-Limpiyadhura-Lipu Lekh area in Darchula district and Jhinsang Chuli in Taplejung district. There is no tri-junction pillar in Jhinsang Chuli and since our border pillar has been erected 14 kilometers west of the border, if India and China agree on some infrastructure project in the future, we might also lose this part of our territory.

Our trade and transit treaty with India also does not accord us equal benefit. Often Nepal has to abide by terms prescribed by India. In an open breach of trade and transit treaty, India even imposes tariff and non-tariff barriers, additional taxes, quantity restrictions, quarantine barriers and anti-dumping duties on Nepali goods.

EPG of Nepal must seriously discuss these issues with its Indian counterpart.
The dams and embankments constructed by India along its border with Nepal breach international law. These structures cause huge floods and inundation every monsoon, killing and displacing many people in Madhes. So far the government of Nepal has watched such tragedy as a mute spectator.

The other concern Nepal needs to raise with priority is hydro development. Energy experts are starting to say that India is no more a big market for electricity generated in Nepal. India is capturing Nepal’s major rivers only for irrigation and seems least interested in electricity from Nepal, especially electricity from projects without Indian investment.
Reportedly Nepali EPG members want to revise the provision whereby Nepal must purchase weapons through India or keep India informed in case it brings them from other countries. EPG must not back down on this vital stand.

India does not want to review the provision of equal treatment to nationals. Article 7 of 1950 treaty states India and Nepal “agree to grant, on a reciprocal basis to the nationals of one country in the territories of the other the same privileges in the matter of residence, ownership of property, participation in trade and commerce, movement and other privileges of a similar nature”. This provision is unfair to Nepal.

We must not forget that replacing the old treaty with new one does not always ensure equal treatment of small neighbor by the big neighbor. Nor does it guarantee compliance.  India, for example, renegotiated its old treaty with Bhutan and signed a new one in 2007. The new treaty did away with the provision requiring Bhutan to take India’s guidance on foreign policy. It also freed Bhutan from obtaining India’s permission in arms imports and security. But, in practice, India still controls Bhutan’s foreign and defense policies.
Let us ensure that unlike Bhutan, Nepal is not cheated while revising the 1950 treaty.
Another problematic aspect of EPG process is that its recommendations are not binding. Thus the two governments may choose to completely ignore the final report of the joint EPG team. A lot depends on the persuasive skills of Nepal’s EPG members.

The author, former Under-Secretary at Ministry of Finance, was associated with United Nations Development Program, Sierra Leone and South Sudan

KATHMANDU, April 6: Health Minister Gagan Thapa, who assumed  office on August 26, 2016, has succeeded in bringing about changes in... Read More...

Jupiter moon may have water plumes that shoot up 125 miles

LOS ANGELES, Sept 27: Hubble Space Telescope has spied what appear to be water plumes on one of Jupiter's icy moons shooting up as... Read More...