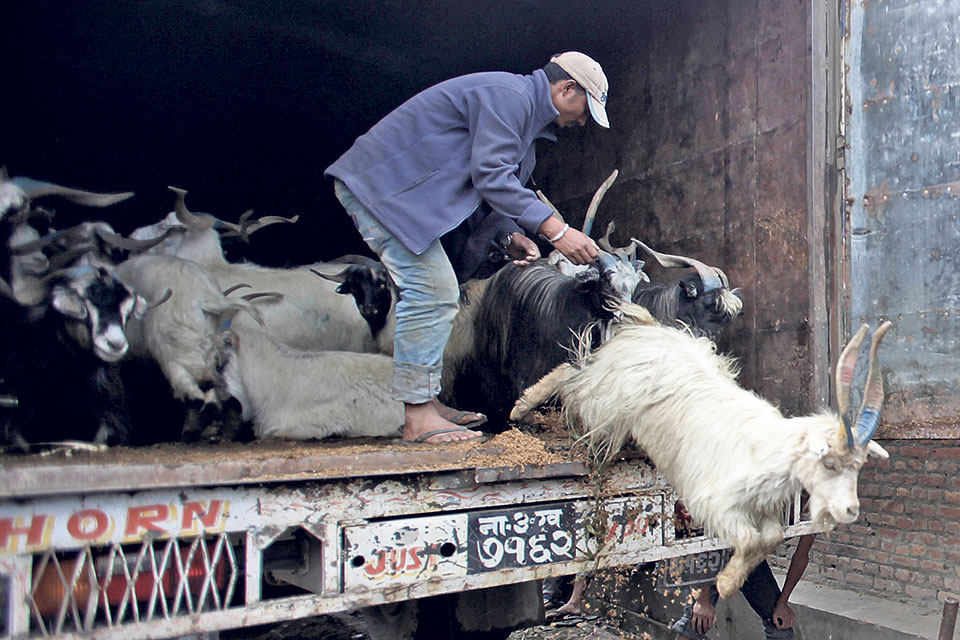 KATHMANDU, Sept 22: The National Food Corporation (NFC) has started selling mountain goats to the public from its Thapathali-based godown from Thursday, which marked Ghatasthapana -- the first day of the fortnight-long Dashain festival.

“Of the 1,000 mountain goats that we are planning to sell, 500 have arrived in the valley. The distribution started from 12 noon on Thursday,” NFC spokesperson Shankar Sapkota said.
He said that the NFC will start selling other (non-mountain) goats on Friday as 200 goats have already been transported into the valley.

The NFC has plans to sell 2,500 goats (non-mountain), brought from Dang and Makawanpur districts, apart from the 1,000 mountain goats being transported from Mustang this year.
“The first lot of 200 goats has been sourced from Tulsipur of Dang district, and more will continue to arrive while we keep selling,” said Sapkota: “From Mustang, 500 mountain goats will arrive in few days.”

“There is no mechanism to find out if members of the same family are buying goats separately but we have not seen any such thing till now,” Sapkota said: “People are buying a goat per person, even if it’s a group of people they have bought a single mountain goat on the first day.”

He said the body weight of mountain goats vary from 40 to 48 kilograms and more. “The goats are huge and people are buying them with their share in the same goat,” he added.

The NFC brings goats and mountain goats from different places of the country and sells them at a subsidized price every year during the Dashain festival.

According to Sapkota, the sales of goats and mountain goats would continue till the stock lasted, which could go till September 26 or 28.

Govt, ASDP and NACCFL sign deal for capacity building of cooperatives in Karnali

KATHMANDU, Jan 28: An agreement has been signed between the government and the Nepal Agricultural Cooperative Central Federation Ltd (NACCFL)... Read More...

KATHMANDU, Jan 28: Export of Nepali products to India and the third countries via the Birgunj customs point has increased... Read More...