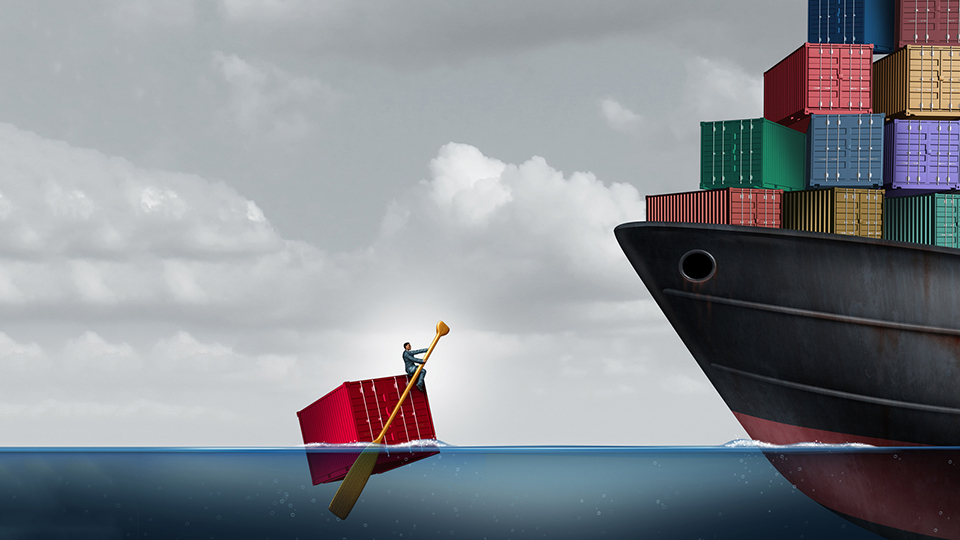 The first month of the current fiscal alone saw trade deficit of Rs 80 billion, which comes to around Rs 2.67 billion per day.

For the past one and a half years, vital indicators of the health of Nepali economy have been headed in a positive direction: inflation is at a 12-year low of 4.5 percent, last year our economic growth was around 7 percent, and we have plenty of foreign exchange reserves. The government and international agencies project around 7 percent growth this fiscal as well. However, improved economic performance has been over-shadowed by anxiety over ballooning trade deficit.

The first month of the current fiscal year (mid-July to mid-August) alone saw trade deficit of Rs 80 billion, which comes to around Rs 2.67 billion per day. Before that, trade deficit had already touched all-time high of Rs 900 billion during the fiscal 2016/17. At a recent meeting of the Development Problems Resolution Committee, Prime Minister Sher Bahadur Deuba expressed serious concern over burgeoning trade deficit and directed concerned officials to come up with a long-term vision to benefit more from foreign trade.

Concern over rising trade deficit has been always reflected in crucial government documents and raised in various economic discussions over the years. If we go through government budgets and other policies introduced by successive governments after 1990, reducing trade deficit has always been a priority. Policies and laws enacted in recent years are also directed at boosting exports, in direct response to surging deficit.

India and China are our major trade partners and naturally, we have big trade deficits with our two close neighbors. But trade deficit is not necessarily bad all the time. If we can channel imports into productive sectors and thus in employment generation, there will be more production and higher government revenue, which in turn will boost our economic performance.

However, in Nepal, most imports are sucked into unproductive sectors. Ever-increasing consumption within the country, coupled with soaring inflow of remittance, is the prime reason for increased imports. Forget the products that are not produced in Nepal, even domestic products are facing tough competition from imported goods. The more we consume foreign products, the more we will need to import. For example import of more vehicles calls for more import of their parts, in addition to importing the fuel and lubricants they consume.

We are almost self-reliant in poultry products, with significant improvement witnessed in this sector over the past two decades, thanks to big investments and commercialization. Yet we are still dependent on imports for vital poultry nutrients, poultry medicines and raw materials for poultry feeds. Limited commercialization of farm sector has created deficit in agro products in the markets, leading to higher import volumes. It is pathetic that Nepal, a predominantly agricultural country, imports agro products worth over Rs 100 billion annually, which is far higher than our total yearly exports. In fact, our export volume is less than 5 percent of Gross Domestic Product (GDP). Nepal has trade deficits with 80 nations out of its 98 trading partners. If exports are less than 15 percent of GDP, such an economy is considered a closed economy.

The 13th government plan had targeted to cap trade deficit at 20 percent of GDP, but it actually went up to 35 percent in the plan period.

Nepal is an agricultural country, with farming contributing as much as a third of GDP. Increasing dependence on agro imports is the result of lack of commercialization, mass exodus of youth to foreign countries and urban centers by leaving behind cultivable lands, less incentive for farmers, and low productivity.

Our ongoing 14th plan set a clear target of 4.7 percent growth in agriculture, which provides employment to almost two-third of our workforce. But without addressing the problems discussed above we are almost sure to miss the target.

The industrial sector, which contributes around 14 percent of GDP, is expected to grow by an average of 10.8 percent during the 14th plan period. This is highly ambitious, for the average growth of industrial sector, over a decade, is around 2 percent, while it is 2.9 percent for agriculture sector. Boosting agriculture and industrial sectors could help reduce the burgeoning trade deficit. Every budget speech touches on the issue of trade deficit and puts forth host of programs to reduce trade imbalance. But the deficit keeps growing.

A good initiative to promote export is NTIS, which was introduced in 2010, with 19 Nepali products on its priority list for export; its latest version, NTIS 2016, has 12 products in the priority list. But the performance of those NTIS products is not satisfactory. Likewise, the Trade Policy 2015 also attempted to address problems in exports.

These government interventions could not yield desired results—promotion of exports and reduction of trade deficit—even though the environment for the growth of industrial sector is gradually improving.

Riding on these reforms, we need to boost our industrial and agriculture sector by broadening export base via private sector investment, both foreign and domestic.
Products identified by the NTIS can be promoted through joint effort of government line agencies, private sector, development partners and other stakeholders. In the absence of sustained and coordinated efforts from concerned agencies, we can’t expand export base and enhance export capacity.

Almost 80 percent of our trade is with India and China. But we have failed to benefit from preferential treatment in trade given by both our neighbors. China offers duty-free access to around 8,000 Nepali products. But we are hardly exporting 300 products to the northern neighbor.

We need to diversify our products and export destinations by exploring the new opportunities in international market. To expand our footprint abroad and consolidate our position with existing trade partners, supply capacity should be strengthened on the basis of Nepal’s competitive and comparative advantages.

We can reduce trade deficit with China with maximum utilization of Rasuwagadhi- Kerung customs point that has been upgraded recently to an international entry point. Integrated checkpoints being set up at major customs points on the southern border would, likewise, facilitate trade with India and other third-countries. The government should also strongly lobby for opening of Tatopani, which has been closed since the 2015 earthquakes.

China’s flagship program, BRI, could be another opportunity to strengthen our trade infrastructure and enhance our presence in global markets.