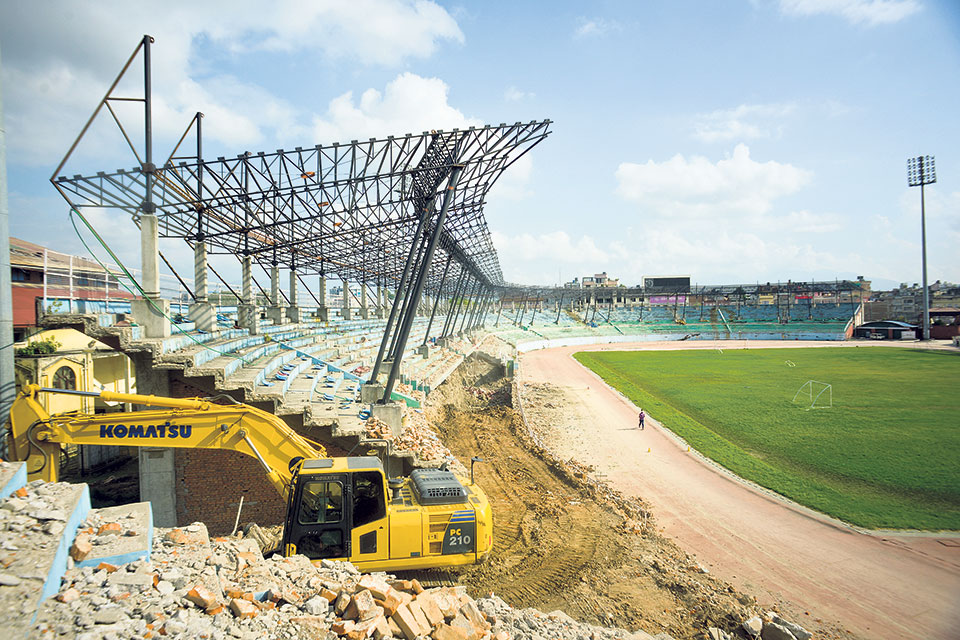 KATHMANDU, Sept 15: The crowd of spectators at the stadium is regarded as the 12th man in a game of football. Cheers from the crowd inspire the players to turn the match around when they are on the verge of losing.

Nepali footballers are familiar with such situations as the Dasharath Stadium, an 18,000-capacity venue, used to be packed with home supporters during international matches in the past.

However, those scenes no more exist as the country’s only international stadium awaits renovation, perpetually, after being damaged by the 2015 earthquake.

Due to unavailability of this stadium, the country’s domestic football has almost collapsed, as All Nepal Football Association (ANFA) claims that the lack of venue has been the major reason behind its stalled league.

The league, which is taken as the backbone of any nation’s football development, has been hindered since the last two years resulting in a shortage of players for the national team and other age-group teams.

On the other hand, the wish of Nepali footballers to play in front of a large number of the supporters doesn’t seem to be fulfilled.

National football team currently has AFC Asian Cup 2019 Qualifiers duty with the schedule of playing six matches against the Philippines, Yemen, and Tajikistan. Out of the six, three matches are scheduled to be played at home ground.

Due to the unavailability of Dasharath Stadium, home matches against Yemen and Tajikistan were played at Halchowk Stadium and ANFA Complex’s ground respectively, which have the capacity of 1200 and 1500 spectators.

Failing to host those matches at Dasharath Stadium prevented a large number of football supporters from cheering the national team. ANFA also failed to utilize the opportunity of generating income through ticket sales.

“The crowd obviously plays an important role in our performances as the players get highly motivated from the cheers of home supporters,” said national team coach Raju Kaji Shakya.

“Our national team is getting a chance to play against top teams in Asian Cup Qualifiers,” Shakya said: “But lack of big stadium and absence of a large number of the fans always make our entire team sad.”

The ticket money generated from international matches and the league is the main source of income for ANFA as well as domestic clubs, according to ANFA’s CEO Indra Man Tuladhar.

But this source of income has been lost after the earthquake damaged Dasharath Stadium.

“We used to generate at least Rs 5 million, from one international match. Hosting the league matches and other big tournaments at Dasharath Stadium also used to help us generate money,” said Tuladhar.

Since the money generated from ticket sales per match used to be divided into three parts, one each for two participating clubs and ANFA, the stadium damage has also had a direct impact on the financial situation of the clubs.

Lack of football activities has prevented the private sector to come as sponsors of the clubs.

Due to unavailability of the stadium, a situation close to void has been created in the national football scene. It has left many footballers unemployed. Many of them have been forced to fly to Gulf countries for overseas jobs like many other youths.

Although ANFA has said that it is hosting the A Division League this year from November 11, lack of a proper venue has put the league in doubt.

The Nepali football governing body has said that it will host the league games at ANFA Complex and Halchowk Stadium, but the low capacity of holding spectators at these venues is not going to contribute well to the growth of the country’s football economy.

On the other hand, Nepal also has missed many opportunities to host international matches and tournaments in the last two years due to the lack of a stadium.

“Due to the unavailability of a venue, we haven’t bid to host notable international tournaments. If we had a proper venue, we would have been able to host international competitions,” said Tuladhar.

“Many nations show interest to come to Nepal to play friendly matches but we are unable to accept their proposals just because we don’t have a good venue,” he said.

SNAIL-PACE RENOVATION WORK
After two and a half years after the earthquake damaged Dasharath Stadium, the National Sports Council (NSC) has started works to demolish the roof of VIP parapet and some blocks of the general parapet.

According to the detailed project report, a new roof has to be constructed at the VIP parapet and it has to be renovated along with retrofitting. Similarly, the NSC has planned to construct new blocks of parapet after demolishing the older ones in the general area.

“We will demolish the VIP Parapet’s roof and some other earthquake-affected blocks of the general parapet within three months,” said Arun Upadhyaye, chief of infrastructure development and repair department at the NSC.

Once the demolishing work is finished, the NSC will call for bids to build a new roof at the VIP parapet and new blocks of the parapet in the general area, Upadhyaye said.

The NSC has allocated a total of Rs 1 crore and 36 lakhs for the demolition work. The estimated budget to complete the total renovation of the stadium is Rs 25 crore, according to Upadhyaye.

Dasharath Stadium is the main venue to host the 13th South Asian Games (SAG) slated for March 2019, and there is doubt over this venue being prepared by that time.

However, Upadhyaye said that the NSC was committed to making the stadium ready before the SAG.

“Our plan is to complete the renovation work of Dasharath Stadium before the 13th South Asian Games (SAG). And we are hopeful of completing all the works on time,” added Upadhyaye.

STEEL STADIUM AT POKHARA
Meanwhile, the government is planning to upgrade Pokhara Stadium keeping in view the SAG, as there is a plan of holding some of the games of the South Asian sports event in the city as well.

The VIP parapet at Pokhara Stadium is also damaged by an earthquake while there is need to construct new blocks of the general parapet as well.

Western Regional Sports Development Committee (WRSDC) had submitted the detailed project report to the Ministry of Youth and Sports over the renovation of VIP parapet and construction new parapets at Pokhara Stadium.

However, the government is now planning to construct the stadium with steel instead of concrete, according to Upadhyaye.

“Constructing with steel can save our time so we are planning to go for it as we must make it ready for the SAG,” said Upadhyaye.

The estimated budget of the stadium with a capacity of 20,000 spectators will be Rs 80 crores, according to Upadhyaye.

MALANG, Indonesia, Oct 2:  Panic at an Indonesian soccer match Saturday left 129 dead, most of whom were trampled to death... Read More...

9th National Games: Most events including inaugural and concluding ceremony to be held in Pokhara

KASAKI, Sept 29: Most of the sports events under the 9th National Games including the inauguration and concluding ceremonies will... Read More...