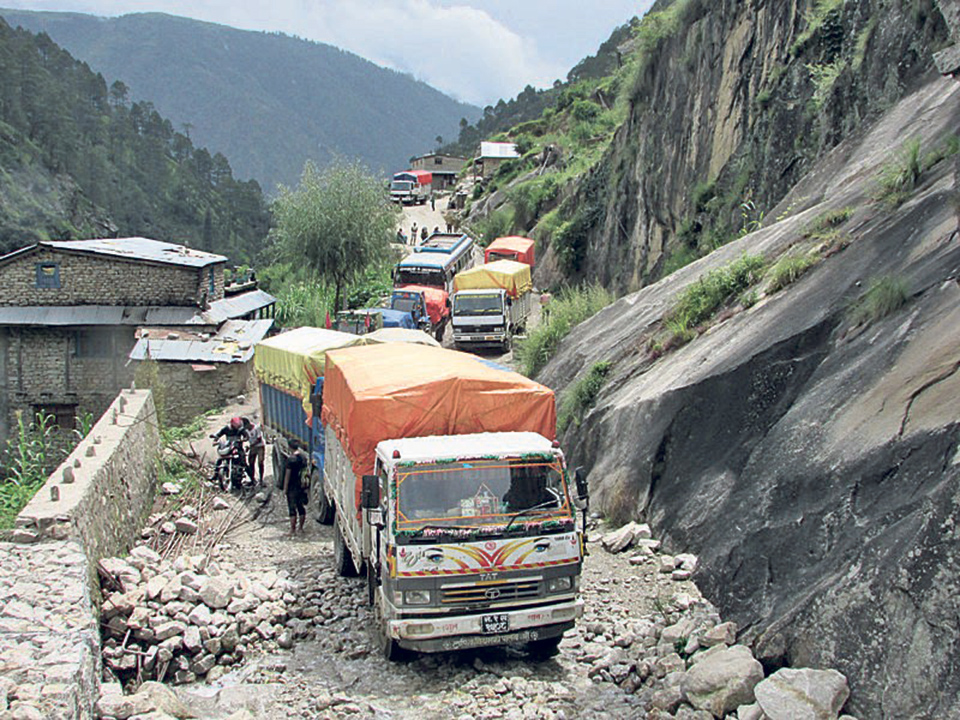 JUMLA, Sept 10: District Agriculture Development Office (DADO) in Jumla has recently brought a provision to provide certificate of origin to supply apple produced in Jumla to other districts.

With this development, apples of Jumla are being supplied to the markets of other districts as well.

Just a month ago, vehicles returning via the roadway of Karnali used to return empty. But from the end of August, vehicles have been busy carrying apples from Karnali. They start in the morning and keep transporting apples till night.

Local merchants who used to complain that they could not carry their apples to the markets of Surkhet and Nepalgunj are finally happy as their apple has got the market.

Vendors carrying goods to Jumla used to pay double charge to the vehicle as they had to return empty. But now these vehicles are returning with apples.

Almost every vehicle that brings daily consumer goods, are transporting apples on their way back. Farmers and vendors can be seen running here and there at the bus park in search of goods carriers.

Tara Bahadur Bohora from Tila Rural Municipality said that he alone has taken four vehicles full of apple to the Surkhet. Locals said that these days’ vendors have to wait for their turn to load apples on vehicles.

Two weeks earlier apples used to be transported at Rs 10 to Rs 13 per kilogram but now the transportation cost has come down to Rs 5 to Rs 7 per kilogram.

Another local merchant Krishna Bahadur Budha said that earlier Karnali used to depend on the tarai market but now Karnali will be self-dependent. The merchants say that the change in situation has encouraged the farmers produce more apples.

Apples of Jumla are being supplied to Nepalgunj, Surkhet, Dang, Kathmandu, Pokhara, Salyan, Dailekh and some of other districts. From the apple garden only farmers have been selling apples at Rs 45 to Rs 60 per kilogram.

However, long drought has reduced the production this year in comparison with the previous year. Due to less production it is difficult to meet the market demand, said the farmers.

Despite less production, apples have grown faster than the previous year due to climatic changes. According to the farmers, apples were sold in the wholesale markets of Surkhet and Nepalgunj at Rs 70 and 100 respectively.

Almost all of the rural municipalities of Jumla produce apples.

“The scope increases as the production increases,” Technical Assistant Khemraj Shahi said: “If the farmers could produce more apples then they wouldn’t have to reach Kalapahad, vehicles themselves will reach to the apple gardens for collection of apples.”

Farmers here in Jumla are selling apples randomly without understanding the market demand. If the government established collection center and manage small grading machines, than the standard of apples could be increased.

Currently, 65 percent apple in the Nepali market is imported from China, 35 percent from India, two percent from New Zealand, whereas the domestic production gives only 8 percent.

KATHMANDU, Feb 5: A significant cut in power outage in the country had led to the increase in industrial capacity by... Read More...

MUSTANG, Oct 10: Western mountainous district of Mustang has produced 5,300 tons of apples this year, recording an increase by 800... Read More...

Agitating IOM students stage sixth round of protest against Dean (Photo Feature)
39 minutes ago
If you want to seek your property share, go to Baluwatar: MP Agrahari
49 minutes ago

CAN lifts Lamichhane’s suspension
58 minutes ago