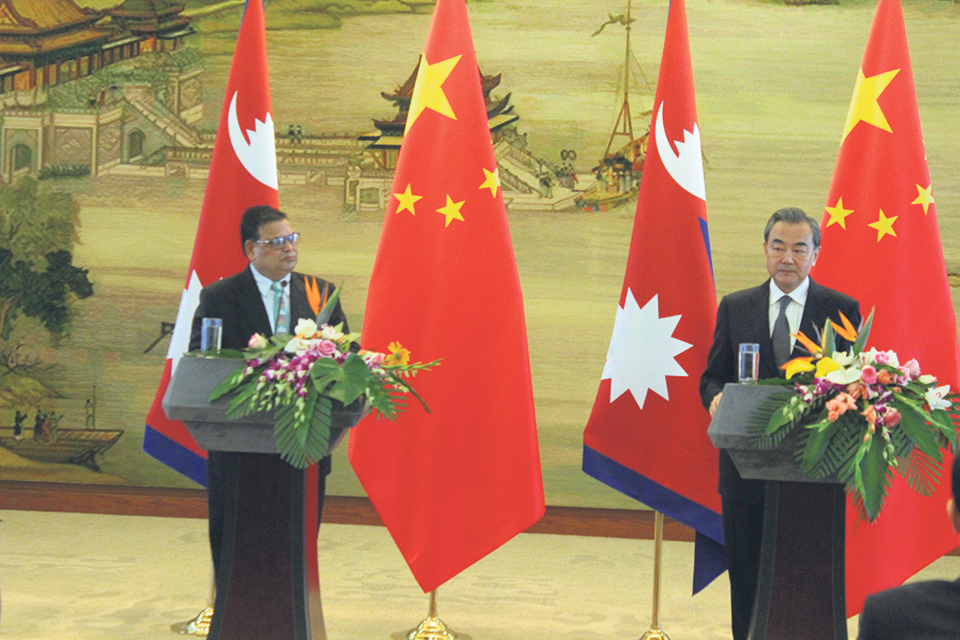 BEIJING, Sept 8: China has expressed readiness to conduct a detailed project survey, design and feasibility study to construct the much-talked-about cross-border railway between the two neighbors at the earliest in a bid to create conditions for a possible China-Nepal-India economic corridor.

At a joint press conference after a bilateral delegation-level meeting between Deputy Prime Minister and Foreign Minister of Nepal Krishna Bahadur Mahara and his Chinese counterpart Wang Yi on Thursday, both ministers informed that the two sides agreed to carry out a detailed project survey, design and feasibility study and also work in areas like personnel training and other cooperation for the construction of the cross-border railway between China and Nepal, via Kerung to Kathmandu, Pokhara and Lumbini as soon as possible, under the framework of the Belt and Road Initiative.

“The two sides have agreed to actively conduct a project survey, design, feasibility study and also work in areas like personnel training and other cooperation so that this mission can be translated into reality as soon as possible for the benefit of the two countries and  peoples,” informed Wang.
Mahara also confirmed that the two sides agreed to carry out a feasibility study survey for a cross-border railway link from Kerung to Kathmandu, Pokhara and Lumbini as early as possible.

Stating that Nepal can become a bridge and link between the two emerging economies of China and India, Chinese Foreign Minister Wang said that China looks forward to gradually creating the conditions to explore and construct the China-Nepal-India economic corridor, and jointly promote the Himalayan region to a new high ground for Asian development.

“China believes that Nepal can also develop the relationship with the two neighboring countries--China and India--in parallel. China and India, as Nepal’s common neighbors, should have the minds and responsibilities of  great powers, respect Nepal’s legitimate rights and interests, support Nepal’s independence and help Nepal  develop and progress,” he said.

He also said that the two sides  agreed that both sides will continue to look at and develop Sino-Nepal relations from a strategic perspective and strive to elevate the long friendly and all-round cooperative partnership between China and Nepal to a new height.

During the meeting between the two sides, which lasted for over three hours, they talked in detail about the cross-border railway and other issues of bilateral cooperation that can be enhanced under the Belt and Road framework.

Though the ministers didn’t disclose details about when the survey and studies for the cross-border railway link would begin, Nepalese officials who accompanied the foreign minister in the meeting said that technical work may be initiated by the end of  this year or the beginning of next year.

“Minister Mahara conveyed to all the Chinese leaders that top leaders of all the political parties are one with regard to cross-border railway construction. He also said that Nepal will take all the necessary measures to initiate the cross-border project into implementation without further delay,” Hari Lamichhane, press coordinator of the foreign minister, told Republica.

In May, the Chinese side had agreed in principle to provide financial support to Nepal for the construction of a cross-border railway link that would link Kerung with Kathmandu, Pokhara and Lumbini.

Similarly, the two sides have agreed to speed up expansion and repair work on the Araniko Highway and the Rasuwagadhi road. The two roads are traditional land access for connecting the two neighbors.

Likewise, Chinese Minister Wang informed that the two sides have agreed to construct and upgrade the dry ports in Tatopani, Kerung and one more border point and also build the China-Nepal cross-border economic cooperation zone on the basis of the dry ports.  He assured that the Tatopani point will resume soon. He said  the two sides will also actively research and open other border points according to  need.

Likewise, Nepal and China have also agreed to complete the joint feasibility study of the Free Trade Agreement by the end of the year. Similarly, the two sides have  agreed to complete 17 post-disaster reconstruction projects on time.

Likewise, the two sides also signed a Memorandum of Understanding (MoU) on Energy Cooperation for strengthening cooperation in oil, gas, water, electricity and clean energy in a bid to help Nepal  diversity its energy sources.

The two sides also signed another MoU on the “Nepal Tourism Promotion Year 2017” in China. Chinese Foreign Minister Wang informed that the two sides  agreed that China will take initiative to open more direct flights to Nepal for the ease of Chinese travelers while Nepal will also take more measures to protect the safety and legitimate rights and interests of Chinese tourists.

BEIJING, May 16: A day after China agreed in principle to provide financial support to Nepal for construction of a cross-border... Read More...