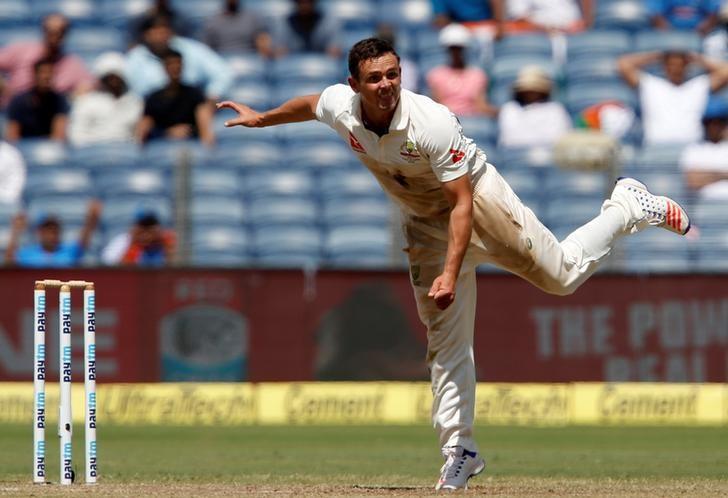 SYDNEY, August 30: Australia have called up spinner Steve O’Keefe to replace injured quick Josh Hazlewood for the second and final test against Bangladesh.

Hazlewood will return home for rehabilitation at the end of the opening test and miss the second match in Chittagong as well as the limited overs tour of India which follows.

Fast bowler Kane Richardson will replace Hazlewood in India but the presence of like-for-like replacement Jackson Bird in the test squad in Bangladesh means a recall for O’Keefe.

The left-arm finger spinner was considered unfortunate to miss out on the trip to Bangladesh after taking 19 wickets at an average of 23.26, including 12 in the first test at Pune, on the test tour of India earlier this year.

O’Keefe, 32, was fined A$20,000 (12,323.76 pounds)for “highly inappropriate behavior” towards a female cricketer while drunk at an award ceremony in April, however, and failed to get a national contract.

Fears that his misbehavior, a second indiscretion involving alcohol in 18 months, might have brought an end to his international career were apparently misplaced, however.

“With Jackson Bird in the squad, we are comfortable with our fast-bowling options for the second test and have elected to add an additional spinner given the conditions we are likely to face in Chittagong,” Australia’s head selector Trevor Hohns said in a statement on Wednesday.

Hazlewood’s contribution to the Bangladesh tour may not be over yet, despite the left side strain that team physiotherapist David Beakley said would require “several weeks of rehabilitation”.

Australia goes into day four of the test at Shere Bangla National Stadium needing 156 more runs to win with eight wickets in hand and Hazlewood will bat if necessary.

The loss of the hardiest of Australia’s pace bowlers just a few months before they host England in an Ashes series around the New Year is a blow, however.

While Pat Cummins, James Pattinson, and Mitchell Starc have been frequent visitors to the treatment room, Hazlewood has been his country’s most reliable fast bowler since making his Test debut in late 2014.

The Ashes series begins in Brisbane on Nov. 23.