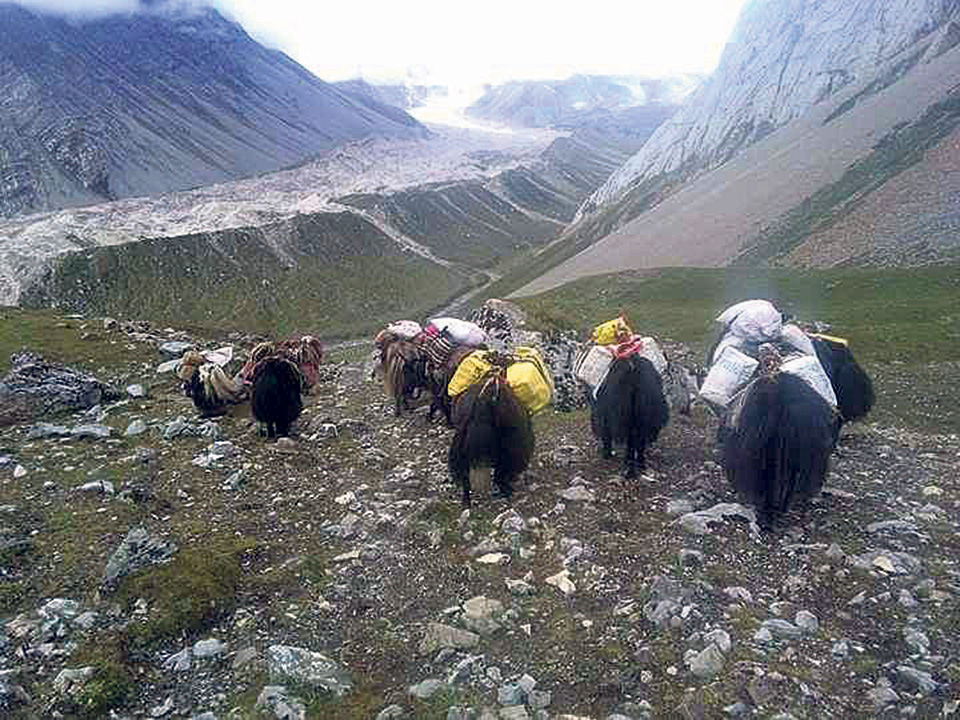 GORKHA, August 26: The route to Tibet via Ngula Pass opens only once a year.

The trade route through Nepal-Tibet border via Ngula Pass near Chhekampar village in Gorkha district has opened for a month.

Now that the route has opened, villagers of northern reaches of Gorkha are preparing to head toward the neighboring Tibetan market to purchase food stuffs to feed their family for the entire year. The route opens only once a year.

“The border opened from Friday. Many villagers have already started heading toward Tibet,” Mingmar Lama of Chhekampar told Republica over phone.

Lama is also preparing to go to Tibet.

Earlier, local villagers used to take lumbers to Tibet and purchase food stuffs there. But as logging is illegal, they take only food stuffs for themselves, and their yaks and mules.

“We have only one month to buy food items needed for a year as the route opens for only a month,” Lama said. “It is difficult to transport food to our village from district headquarters and we cannot afford to charter helicopters to transport food.”

According to locals, it is cheaper to bring food form Tibet than from the district headquarters.
“It all depends on the Tibetans. We don’t know when the border will open and when it will close. Generally it remains open for a year. But sometimes they open for two months too,” added Lama.
Though the other route via Kutang Pass remains open throughout the year, the route is comparatively difficult than the one via Ngula Dhojhyang Pass. This is why most of the locals from Samagaun and other northern villages like Chumchet, Prok, Lho and Bihi use the Ngula Dhojhyang Pass to bring food stuffs from Tibet.

Dhan Bahadur Gurung, chairperson of Tsum Nubri Rural Municipality, said locals in northern villages of the district have been facing difficulty as these villages are not connected to the district headquarters by road. “Locals had long been demanding that the route be opened. But Tibet was not willing,” he said, adding: “Now, we will request the government to take up the issue with China.”
Villages in northern Gorkha only produce barley, potato and buckwheat. Farming and tourism is the only source of income generation for locals of these villages. Some locals of the villagers are working as tourist guides and porters, while few operate lodges. Lodge owners airlift food directly from the district headquarters.

Both the passes two Tibet are inaccessible during winter and monsoon seasons.
Meanwhile, Nepal Army has been opening track of a road to northern villages of Gorkha from a village called Thumi near Arughat.

GORKHA, June 3: The settlements in the northern parts of Gorkha district are almost deserted at present. Hardly any youths can... Read More...