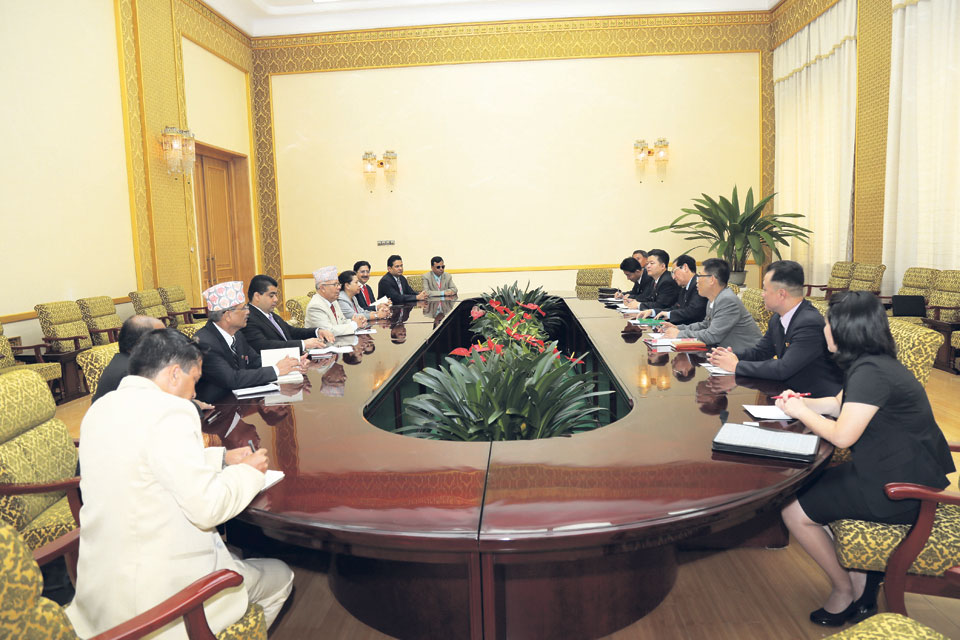 The delegation, which was led by former Prime Minister Madhav Kumar Nepal, held talks with government officials, top leaders of the Democratic People's Republic of Korea (DPRK) including prominent leaders of the Supreme People's Assembly, and Workers Party of Korea. “Our visit is for creating a conducive environment for dialogue and promoting peace,” said former Prime Minister Nepal.

Nepal, who is a senior leader of CPN-UML, asked DPRK leaders to engage in talks and dialogue with concerned stakeholder to find an amicable solution to the rising tension in the Korean peninsula, said his personal secretary Mohan Gautam.

The former prime minister also expressed his concern and good wishes to the International Association of Parliamentarians for Peace (IAPP), Universal Peace Federation (UPF) and its founder Dr Hak Ja Han Moon as well as founding Chairman of ICAPP Jose de Venecia Jr, who is five-time Speaker of the House of Representatives of the Philippines, for the efforts to maintain peace and security in the peninsula.

He also invited DPRK leaders to participate actively in international forums such as UPF, IAPP, and ICAPP.

Another member of the delegation, former Minister Ek Nath Dhakal said the Nepali delegation held separate meetings with Kim Yong Nam, president of the Presidium of the Supreme People's Assembly and Ri Su Yong, vice-chairman of the Central Committee of the Workers' Party of Korea who is also the chairman of Foreign Affairs Committee of the Assembly.

They also held meetings with Thae Hyong Chol, minister for Higher Education and president of Kim Il Sung University; chairman of the Korea-Asia Friendship Parliamentarians Group and Kim Jong Suk, chairwomen of the Korean Committee for Cultural Relations with Foreign Countries. Former Minister Haribol Gajurel and lawmaker Chhaya Sharma Panta were among other 10 members of the delegation.

The Nepalese delegation also attended some important events organized on the occasion of the 5th International Festival to Praise the Great Persons of Mount Pektu.

Dhakal asked parliamentarians of the Supreme People's Assembly to visit Nepal and lay the ground for further exchanges and cooperation to strengthen bilateral relations.

DPRK government leaders and Supreme People's Assembly members were appreciative for the Nepali parliamentarians for the visit.