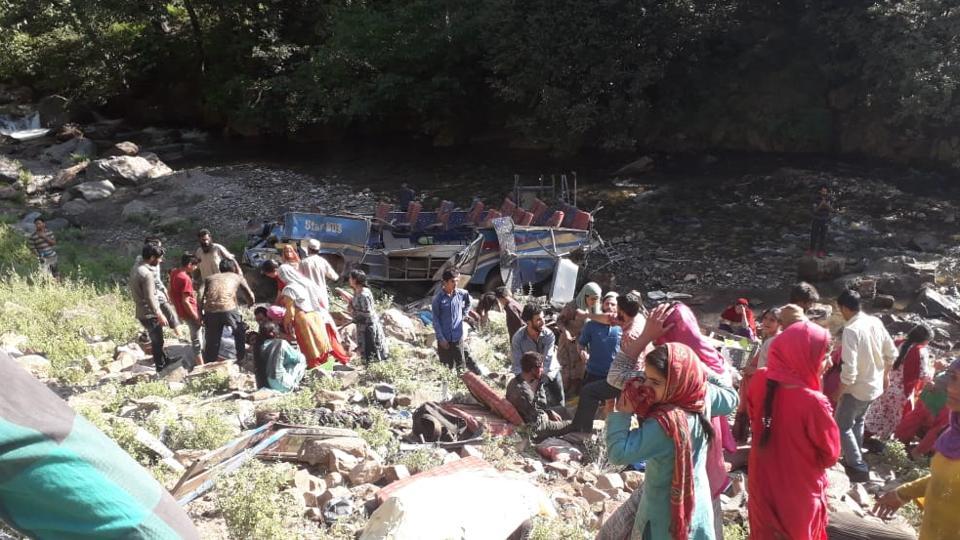 Scenes from the accident site at Kistwar of Jammu and Kashmir. (HT Photo)

SRINAGAR, July 1: An overcrowded minibus crashed into a gorge in Indian-controlled Kashmir on Monday, killing at least 31 people and injuring another 7, officials said.

The bus plunged off the Himalayan mountain road as its driver negotiated a curve and rolled down into a 150-meter (500-foot) deep gorge along a rocky stream, said civil administrator Angrez Singh Rana. He said officials were investigating whether it was a mechanical failure or driver’s negligence.

Top police officer M.K Sinha said the bus hit the rocks and was torn apart in several pieces. He said the 27-seat bus was overcrowded.

Rescue teams have evacuated seven injured to hospitals, where all of them are in critical condition.

On Thursday, a minibus carrying students to a picnic crashed into a gorge along another Himalayan road in Kashmir, killing at least 11 and injuring seven others.

India has the world’s deadliest roads, with about 150,000 killed and 470,000 injured annually. Most crashes are blamed on reckless driving, poorly maintained roads and aging vehicles.

DHADING, April 21: Two persons died on the spot and 10 others injured when a passenger bus met with an... Read More...

ROLPA, Jan 7: Two passengers have been killed in a bus accident in Rolpa on Monday. ... Read More...