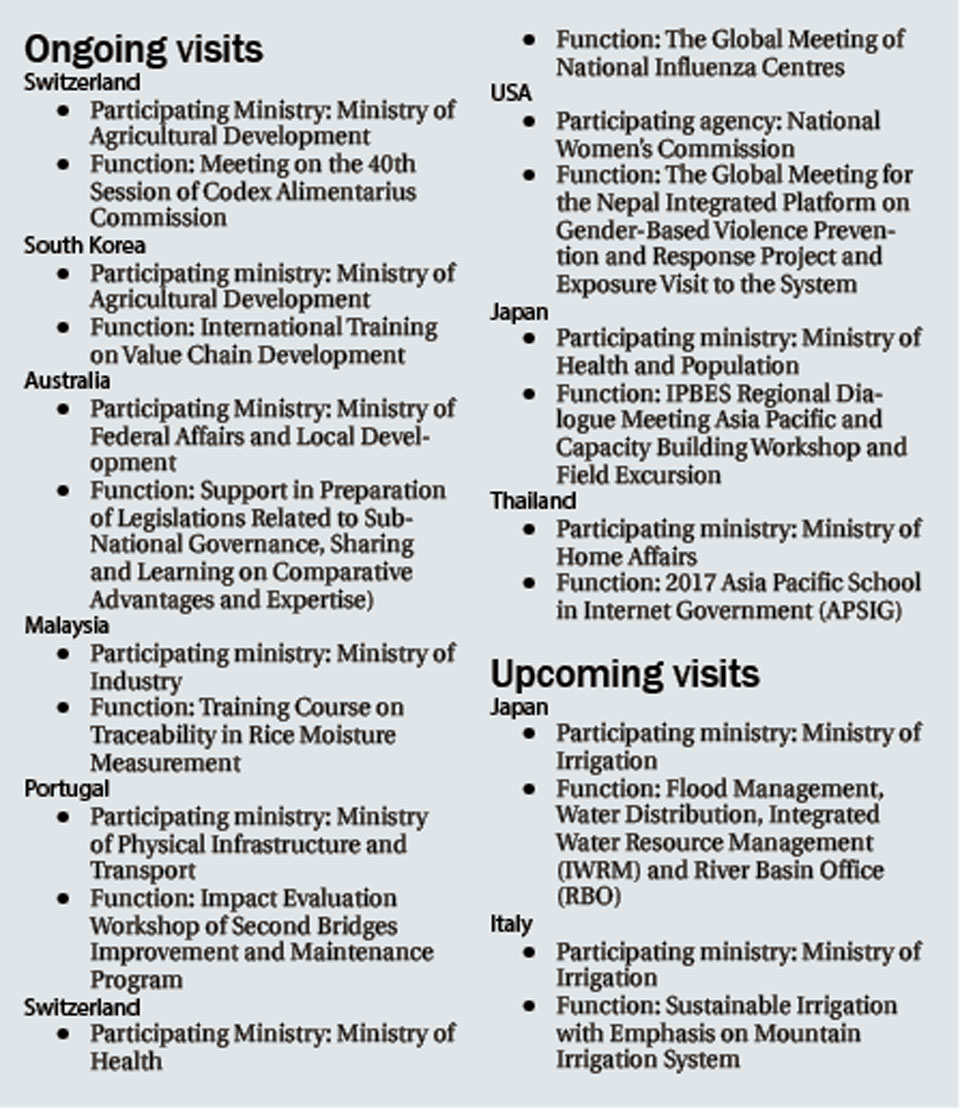 But tracking by Republica of government employees who acquired permission for overseas trips shows no decline in such visits.

Over 100 government staff are currently on foreign visits and twice as many more are in the queue to visit overseas in the next few weeks, according to information gathered from various agencies.  The actual figure could be higher since information pertaining to some ministries is not included.

Among them, at least 16 officials of the Ministry of Agricultural Development and various departments are in South Korea and Switzerland. Last week, more than two dozen officials of the ministry had attended a program in Sri Lanka.

"Visits to South Korea and Sri Lanka took place through the World Bank funded PPCR: The Building Resilience to Climate Related Hazards Project of the World Bank is running an independent unit at the ministry, focusing on climate change-related issues," said   Tika Ram Sharma, information officer at the ministry.

Talking to Republica, officials at some of the  ministries concerned said they are not happy over the way taxpayer money is being wasted on useless programs.

"This particular trip costs somewhere between Rs 600,000 to 800,000 per person. With that kind of money, we could have given residential training to around 1,000 government employees at local level. It would be good if the government bans such useless visits," an official at the Ministry of Federal Affairs said, referring to Monday's the Australia visit of his colleagues.

Sharma, however, defended the visits, saying they were good for the  development of the  employees concerned and the government agencies.

"Such visits are useful for learning the good practices of other countries in coping with the hazards of climate change. Experience gained from Sri Lanka and Korea will help officials develop appropriate action plans to reduce the impact of climate change on farmers," he said.

KATHMANDU, July 11: Government employees have spent over a billion rupees on foreign visits in the last two months. The... Read More...

No leave and deputation for civil servants: OPMCM

Kathmandu, July 26: The Office of the Prime Minister and Council of Ministers has directed all the Ministries not to... Read More...