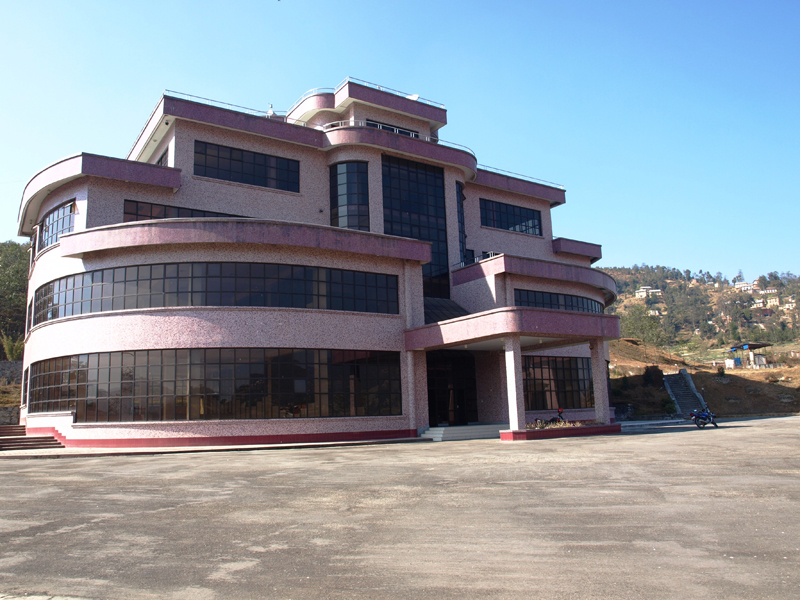 BANEPA, July 17: After years of initiatives to start it, the country’s first and only IT Park in Banepa is finally breathing life. With work station and several other important infrastructures being built at a great pace, the park is seen like a happening place now.

Work started at the park after one and half years of the government’s decision to allow to two private companies and the Kathmandu University to take the domain. The park, established by the government in 2013 with an aim to promote information technology in the country, had remained unoccupied so far.

KU, Cloud Himalaya and Soft Tech foundation are now building infrastructures at the business block of the park. All the three parties had signed separate MoU with the Department of Information Technology on 6 April, 2016 to occupy the facility for ten years. However, the government pulled back from it immediately after the deal was signed. This had forced KU and the other two companies to stay put. The government gave its nod to the agreement only recently.

“Now we are moving ahead with our plans. We have already built work station and installed important facilities,” said Dr Manish Pokharel, chief of KU’s computer department.

KU recently organized a public program at the park to make local representatives aware of the way the facility would work and contribute in the locality’s development. “The purpose of the interaction program with representatives from various organizations was to discuss the function and benefit of the IT Park,” he said.

Latest research, business incubation and finishing schools are three things KU has promised with the IT department. Pokharel said that KU is going to set up everything that is necessary for gaining its objective. “Our students would be getting job right after they complete the course. That is our vision. Latest research, business incubation and finishing school are three areas we are going to offer services to our students,” he said. “KU plans to coordinate with related sectors to avail job for students. We are also going to invest in this regard,” he added.

According to Pokharel, Smart City Research Center is going to be built very soon at the park. For this, the university has been studying various available models. “We are now studying Korea’s models on smart city. We will review other available models and choose a model that will help in making the center a good resource center,” he said. He added that KU has spent Rs 3.5 million so far for constructing required infrastructures.

Soft Tech Company has also been building infrastructures in the IT Park. According to its Managing Director, Ambika Prasad Luitel, local engineers were trained to build necessary infrastructures for the company. “Our goal is to develop software and export it. Similarly, digital campaign, call center and BPO etc are our areas,” he said.

Luitel stated that around 20 IT professionals will be initially employed by the company at the facility and said that the selection will be on merit basis. “We are going to employ 20 to 22 IT professionals. But we will expand the scope later,” he said.

Similarly, Cloud Himalaya will be establishing and running a data center at the park. In the first phase, the company aims to employee 60 IT professionals.

These activities at the park have filled locals with enthusiasm. “It remained unoccupied for years. We thought that it would be left just like that,” said Madhan Singh Thapa of Dhaneshwor. “But now, they are building infrastructures here at a great speed. When they are investing so much on the park, we are sure that the park will come to life very soon,” he added.

Locals believe that the park would make positive impact of the development of Banepa. “Some will get job here, that’s a direct benefit. Indirectly, there would be many more opportunities for the locals too,” he said.

After 20 long years, the wait is finally over

KATHMANDU, Aug 20: "Life has been painful for me. I can neither live a healthy life nor let myself to... Read More...