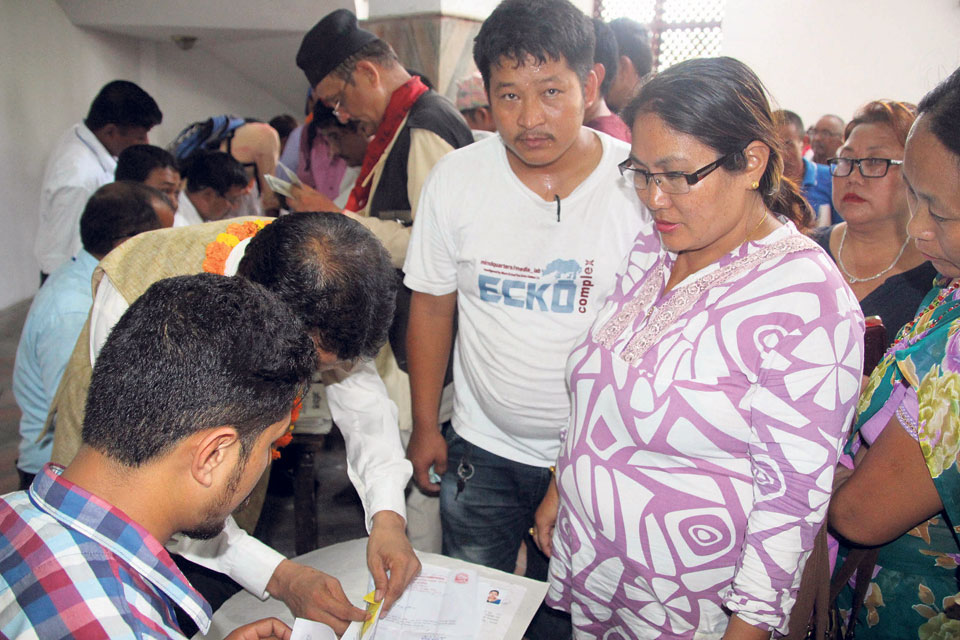 Candidates filing their nominations in Sunsari on Sunday. Republica

DHARAN, June 22: Going against the gender-friendly election laws, political parties in Sunsari have given priority to male candidates by sidelining female candidates for the second round of local elections stipulated for June 28.

Though the participation of women in political campaigns has been really commendable, they have lacked behind in candidacy. Due to the fear of losing the elections, parties fear choosing women candidates. They have not just violated the election laws but have even deprived women of their rights. As per the present constitution, fielding of at least one woman in two major posts in the local elections in compulsory. However, parties have ignored this law.

Even though there is enough number of qualified female candidates in the district, parties are still not ready to provide them ticket fearing defeat in the elections. Due to this, mostly male candidates have been given tickets for major posts to the disappointment of women candidates. The records of nominations for two sub-metropolitan cities, four municipalities and six rural municipalities of Sunsari clearly show the dominance of male candidates.

Very few women candidates have been able to get ticket for the major posts through open competition. Under the quota system, two seats - one each for woman and Dalit woman - have been reserved exclusively for women.

As per the details provided by the District Election Office (DEO), Sunsari, as many as 120 male candidates have filed their candidacy for the major posts of 12 local units of the district while the number of women is just 12. On the other hand, number of female candidates for the post of deputy mayor or vice chairperson is 81 and that for men is 28.
Similarly for ward chiefs, around 741 males have registered their candidacy while the number of women is just limited to 41.

“The number of female aspirants was comparatively less but even those few female aspirants were not given opportunity to prove their worth,” said Shila Bajracharya, woman activist of Dharan, adding, “There are no women in the decision making level of the party so there is no one to advocate for the women to get tickets. This is one of the reasons for women lacking behind in candidacy.”

Similarly, in Inaruwa Municipality, nine males and three females have been picked for the post of municipal chief. In Dharan Sub-metropolitan City, 99 males have filed for their candidacy for the position of ward chief while the number of female is only nine. In Itahari, 117 males have been picked for ward chiefs and the number of women for the same post is 11.As per some women leaders, patriarchy has been still dominant in Nepal.

“As women don't get much opportunity to show their skills and knowledge, they are less popular in the society in comparison to males. This is likely to affect the votes so this is the major reason why political parties feared to pick women candidates,” said Basnet.

KATHMANDU, May 7: Women have come across an increasing spate of violence perpetrated by a male, said the National Women... Read More...

Eight women candidates are in election race in Dang