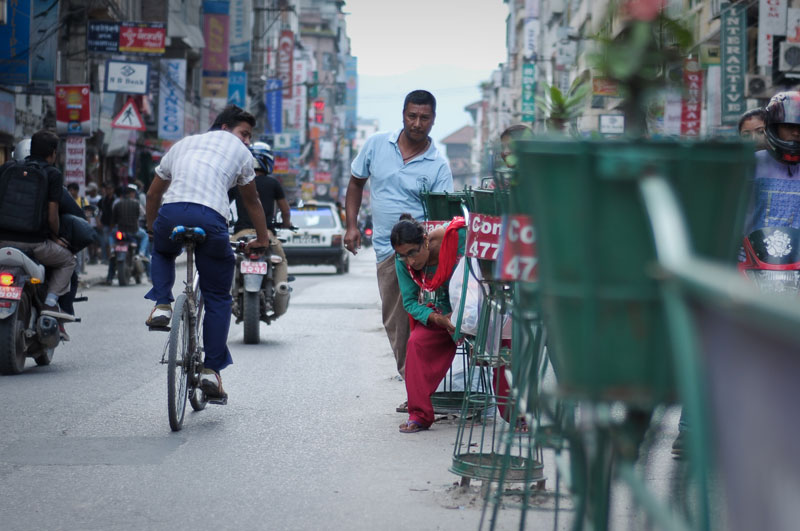 KATHMANDU, June 2: The drive against people crossing the road haphazardly that has reportedly become effective in just four days of its launch will be expanded across Kathmandu valley soon.

As part of the drive that started by the Metropolitan Traffic Police Division from May 30 and is limited only to specific places in the valley at present, a fine of Rs 200 is imposed on a pedestrian found to be crossing the road haphazardly or held for three hours.

While it has come under fire from various quarters for imposing the rule without necessary infrastructures and due preparations, the Division maintained that the campaign aims at minimising road accidents. Every year, more than 40 percent of walkers die in road accidents in the valley, according to data with the Division.

"The campaign has been limited to only 30 to 40 places at present for a lack of necessary infrastructure. We will expand it across the valley until next week," said Deputy Inspector General of Police Mingmar Lama.

He said that concerned authorities have been directed to paint pedestrian crossings in places lacking them in coordination with the Kathmandu Metropolitan City and the Department of Roads. "We will launch the drive in other areas thereafter," he said.

Since the drive was launched, the total 10,861 pedestrians have faced action for crossing the road randomly, the Division said. More than 1.3 million was collected in revenue from the total 6,618 walkers who were found to have crossed the road haphazardly.

Likewise, the remaining 4,243 pedestrians who faced punishment on the same charge were made to take an awareness class after failing to afford to pay a fine of Rs 200 each. RSS

KATHMANDU, Feb 24: With an objective to draw the public's attention toward health hazards caused by increasing air pollution in the... Read More...

2,351 new cases of COVID-19 recorded across the country in past 24 hours, cases doubling every four days
31 minutes ago