21 positive for coronavirus on cruise ship off California 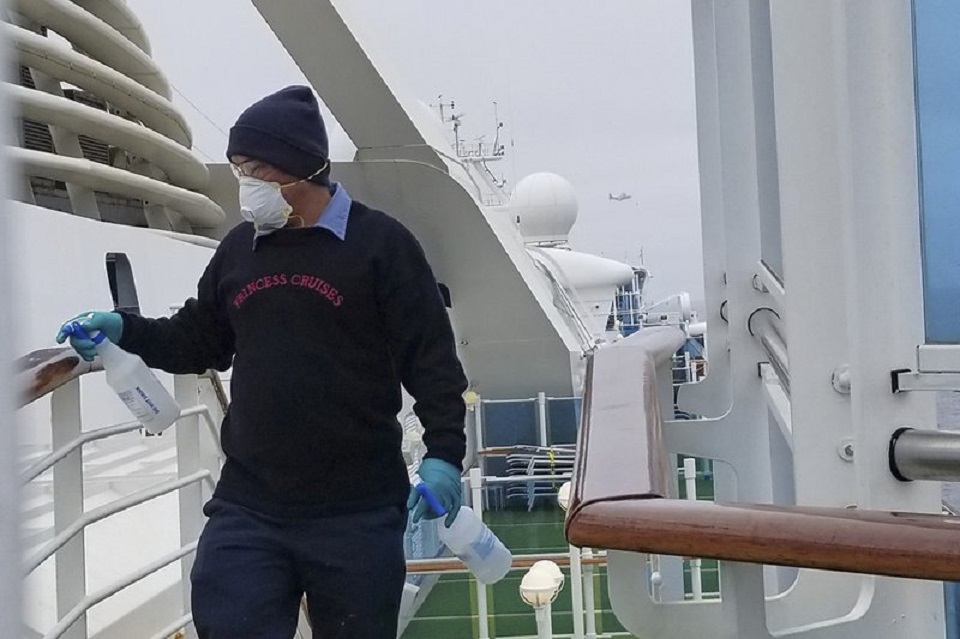 CORRECTS COAST GUARD TO NATIONAL GUARD-In this photo provided by Michele Smith, a cruise ship worker cleans a railing on the Grand Princess Thursday, March 5, 2020, off the California coast. Scrambling to keep the coronavirus at bay, officials ordered a cruise ship with about 3,500 people aboard to stay back from the California coast Thursday until passengers and crew can be tested, after a traveler from its previous voyage died of the disease and at least two others became infected. A National Guard helicopter lowered test kits onto the 951-foot (290-meter) Grand Princess by rope as the vessel lay at anchor off Northern California, and authorities said the results would be available on Friday. Princess Cruise Lines said fewer than 100 people aboard had been identified for testing. (Michele Smith via AP)

SAN FRANCISCO, March 7: Twenty-one people aboard a mammoth cruise ship off the California coast tested positive for the new coronavirus and 19 of them are crew members, Vice President Mike Pence announced Friday, amid evidence the vessel was the breeding ground for a deadly cluster of more than 10 cases during its previous voyage.

He said federal officials were working with California authorities around-the-clock to bring the Grand Princess, with more than 3,500 on board, to a non-commercial port over the weekend and test everyone for the virus. There was no immediate word on where the vessel will dock.

The U.S. death toll from the coronavirus climbed to 16 after Florida health officials said late Friday night that two people who tested positive for the new coronavirus died in the state. The announcement was the first report of deaths on the East Coast.

The number of infections swelled to over 200, scattered across about half the states. Pennsylvania, Indiana, Minnesota and Nebraska reported their first cases.

President Donald Trump, speaking earlier Friday at the U.S. Centers for Disease Control and Prevention in Atlanta, said he would have preferred not to let the Grand Princess passengers disembark onto American soil but will defer to the recommendations of medical experts.

“I don’t need to have the numbers double because of one ship that wasn’t our fault,” he said. “And it wasn’t the fault of the people on the ship either. Okay? It wasn’t their fault either. And they are mostly Americans.”

“We have to be better than just leaving all these people out at sea. There are Americans on board, families, seniors, and others all wanting nothing more than to be safe and to get treatment if they need it. With the proper precautions in place and following the protocols called for by science, we can protect the public health while preserving our basic humanity,” Atkins said. “Any attempt to use these passengers as pawns or scapegoats for political cover has to be rejected by anyone with a working moral compass.”

The ship was heading from Hawaii to San Francisco when it was ordered Wednesday to keep its distance from shore so 46 people with possible coronavirus symptoms could be tested. On Thursday, a military helicopter crew lowered test kits onto the 951-foot (290-meter) ship by rope and later flew them for analysis at a state lab.

Health officials undertook the testing after reporting that a passenger on a previous voyage of the ship, in February, died of the disease.

In the past few days, health authorities disclosed that at least 10 other people who were on the same journey also were found to be infected. And some passengers on that trip stayed aboard for the current voyage — increasing crew members’ exposure to the virus.

Princess Cruises said the ship’s doctor began informing passengers and crew of their results after confirmation from the Centers for Disease Control and Prevention.

Another Princess ship, the Diamond Princess, was quarantined for two weeks in Yokohama, Japan, last month because of the virus, and ultimately about 700 of the 3,700 people aboard became infected in what experts pronounced a public-health failure, with the vessel essentially becoming a floating germ factory.

On Wall Street, stocks swung wildly as fears mounted over the potential damage to the global economy from factory shutdowns, travel bans, quarantines and cancellations of events big and small — a list that grew to include the world-famous South by Southwest arts festival in Austin, Texas, which was set to begin next week.

Trump signed an $8.3 billion measure to help public health agencies deal with crisis and spur development of vaccines and treatments.

Worldwide, the virus has infected more than 100,000 people and killed over 3,400, the vast majority of them in China. Most cases have been mild, and more than half of those infected have recovered.

Most of the dead in the U.S. were from suburban Seattle’s Life Care Center nursing home, now the subject of federal and state investigations that could lead to sanctions, including a possible takeover of its management. Washington state has the nation’s biggest concentration of cases, with at least 70.

Thirty medical professionals from the U.S. Public Health Service will arrive Saturday at the nursing home to help care for patients and provide relief to the exhausted staff, said Dow Constantine, executive in charge of Seattle’s King County.

“We are grateful the cavalry is arriving. It will make rapid change in the conditions there,” he said.

The nursing home was down to 69 residents after 15 were taken to the hospital in the preceding 24 hours, Constantine said.

Some major businesses in the Seattle area — including Microsoft and Amazon, which together employ more than 100,000 people in the region — have shut down operations or urged employees to work from home. The University of Washington called off classes at its three Seattle-area campuses for the next two weeks and will instead teach its 57,000 students online. And a comics convention next week in Seattle that was expected to draw about 100,000 people was canceled.

California emerged as the center of the virus when a Sacramento-area man who sailed aboard the Grand Princess last month during a visit to a series of Mexican ports later succumbed to the virus. Others who were on that voyage also have tested positive in Northern California, Nevada, and Canada.

Three dozen passengers on the Grand Princess have had flu-like symptoms over the past two weeks or so, said Mary Ellen Carroll, executive director of San Francisco’s Department of Emergency Management.

An epidemiologist who studies the spread of virus particles said the recirculated air from a cruise ship’s ventilation system, plus the close quarters and communal settings, make passengers and crew vulnerable to infectious diseases.

“They’re not designed as quarantine facilities, to put it mildly,” said Don Milton of the University of Maryland. “You’re going to amplify the infection by keeping people on the boat.”

He said the fallout from the ship quarantined in Japan demonstrates the urgent need to move people off the ship and into a “safer quarantine environment.”

Steven Smith and his wife, Michele, of Paradise, California, said they are a bit worried but feel safe in their room aboard the ship.

“What’s given us hope is that the system that is in place, our government, the CDC, we feel is doing a remarkable job,” Steven Smith said.

BAGHDAD, March 22: Iraq’s government has extended a curfew on travel in and out of Baghdad until March 28 as... Read More...

DUBAI, March 22: The United States’ offer to help Iran in its fight against the new coronavirus pandemic is strange,... Read More...

NUR-SULTAN, Feb 2:  Kazakhstan has evacuated 83 of its citizens, mostly students, from the Chinese city of Wuhan which is epicentre... Read More...