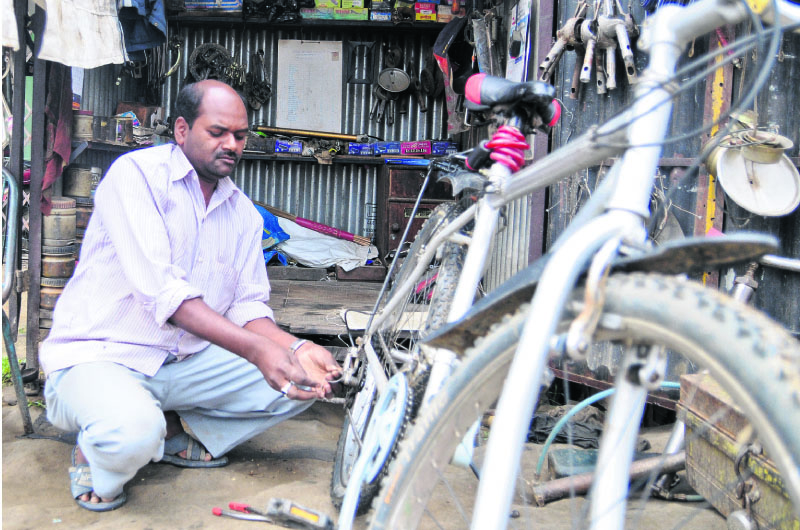 We often get our vehicle tires checked by the same neighborhood mechanic we have been going to for years, our homes painted by the person whose kids we have seen since they were toddlers, and if there is anything that needs fixing around the house, in almost every family, there is that one face that comes to our minds. Life without these handymen would be peppered with problems. We also know that many of these people aren’t from Nepal – most are from towns right across the borders – and often found ourselves wondering what brought them here, so far away from home.

Muhammad Ajmat Ali was eight years old when he first came to Nepal and discovered his love for cycles. He still remembers how excited he was when his father decided to let him tag along and they came to visit relatives who were working here. Not really interested in school, he was delighted to be away on an extended holiday. “There was a man who would rent out his cycle to me at 50 paisa for the entire day for the first few visits. But after that, he refused to let me use it,” says Ali. When he couldn’t ride a bicycle all day long, he found another way to be around cycles.

Ali had an uncle who had a cycle workshop in Mahalaxmisthan, Lalitpur and he spent his holidays tinkering around the place. He picked up bits and pieces of information while his parents were out visiting people and doing odd jobs to fund their stay. By the time he was 12, he had shifted to Kathmandu for good and was working at a bigger workshop that belonged to a family friend in New Baneshwor, Kathmandu.

Like him, there are other people, from across the border, who have found a home in the country. “There aren’t many people in Nepal who want to get down and do the dirty work,” says Ali, which leaves a lot of vacant positions for those who don’t mind doing these jobs to sustain themselves.

Surender Shah, a painter by profession, says that when he first came to the country 18 years ago, he had no clue as to what he would do when he reached Kathmandu. “I had friends here who vouched that life was better and after a while, I decided to find out if that was true,” he says. During the first few months, he remembers walking around looking for work, doing odd jobs to sustain himself. The first proper job he had was painting furniture, which paid just enough to cover his rent and food expenses. He was 30 when he came to Kathmandu and he had a big family he needed to support. Living with four other people in a small room, he managed to send money home after having been here for three months.

One of the biggest reasons both of them left their homeland in India to live in a foreign land is because they realized they could save a lot more living far from home, where they didn’t know many people. “Back home, I would spend almost 60 rupees for every 100 rupees I earned,” says Ali, who tried to move back when he got married. After four months of trying to work in his village, he decided that it was better for him to return to Kathmandu. He had unemployed friends who wanted him to pay for them because he was making a living and they weren’t.

Looking back, they realize that the weather too played a role in them staying in the country. “Back home, it’s hard to even step out during the day, much less work outside in the heat all day long,” says Shah.

Mohammad Roj Ansari too thinks that was the reason he ran away from home when he was eight years old. All his friends had dropped out of school to work and he didn’t want to continue either. Having first gone to Mumbai, he realized that things weren’t much better there than it was at home. He had heard about the pleasant weather and abundant opportunities in Kathmandu and he too decided to see if that was true.

“But it wasn’t just the heat that deterred me from Mumbai. Kathmandu was much closer to home and I had heard that people who put in an honest day’s work were respected,” he says. It wasn’t something he got to experience when in Mumbai. While looking for work in his own country, he faced a lot of racism and suspicion because he was from Bihar and couldn’t speak Hindi properly. “Although I came to Kathmandu and only spoke Bhojpuri, I was still taken in by a family who helped me get on my feet,” he says.

Shah didn’t speak much Hindi or Nepali when he came to Kathmandu either. “The one thing that worked for me after I came here was the fact that I had learned how to paint in India and had a skill to work with,” says Shah. Now, after 18 years of hard work, both he and Ali have relatives who are working under their supervision. Nowadays, instead of them having to go door to door looking (even begging) for work, people seek them out instead.

“It took a lot of time, patience and hard work to gain people’s trust. When I give a job my best, word spreads and others come looking for me,” he says. However, jobs are hard to come by during the rainy season and that’s the season he gets a holiday of sorts, and he goes home for almost two to three months.

Ali, on the other hand, had no prior experiences to go on. He was nine when he started doing odd jobs at a cycle workshop in Mahalaxmisthan. For 11 years after moving to Kathmandu, he worked at a cycle workshop in New Baneshwor. “When I started working, the parliament hadn’t even been constructed yet,” he recalls. His first salary, he remembers was Rs 200 per month.

Now 36, he has his own cycle workshop that has “Ali Cycle” painted in small print. A small tin room is his workplace. The journey to establishing himself as a small business owner however was far from easy. When he left his job in New Baneshwor, he just had a small tin box full of tools, two air pumps and a sac to his name. Although things are better now, challenges are still aplenty. Sustaining his livelihood with cycle repairs is hard. There aren’t many cycle riders these days, and those who ride prefer going to places that exclusively mend mountain bikes. Things looked so bleak at one point of time that he had to buy a stove from the scrap collectors and expand his services to include repairing stoves too.

“The struggle to get where I am was hard and the reason I have made it this far is because of people around me who trust me and help me out,” he says. All the people in the neighborhood know, trust, and respect him, but it came with time and patience. When he first arrived, he would often be at the receiving end of rude comments. He was fortunate enough that it was all he faced, for Roj reveals that he has been robbed a couple of times while going home from work. “This was back when I didn’t know how to speak Nepali and people didn’t respect the hard work I had put into earning that money,” he says. He says that if it weren’t for the goodwill of a neighborhood shop that let him take goods in credit, he would have probably gone hungry for weeks.

But even though life here is still challenging, there are still people coming in, looking for jobs every day. Muhammad Raees Ansari is a 17-year-old who just came to Kathmandu a week ago, hoping for a better life. His cousin, Roj, has been doing well in the welding business and his parents have sent him to earn a living and sustain himself. He doesn’t know how to speak Nepali and only speaks a little Hindi. He is, however, hopeful that after learning the tricks of the trade, he will be able to open a small workshop with his cousin.

Currently, people who have been living here for a long time can apply for a card at the Indian Embassy. With this card, they can get a drivers’ license and purchase vehicles in their own names. However, everything has its limits and this card doesn’t make them eligible to buy land or own a house. This, they unanimously confess, makes them feel like outsiders even when they have spent a good amount of their lives here. “But still the pros outweigh cons and, for many of us, it is still a land of opportunities,” says Ali.

Hurdles galore all the way home for passengers

KATHMANDU, Oct 5: The journey of about 2 million people who are leaving Kathmandu Valley for their hometowns to celebrate Dashain... Read More...

‘Diplomatic note’ sent to India seeking action against dissemination of blasphemous material about Nepal, its political leadership
18 hours ago

Where are Sino-Indian relations heading?
16 hours ago

85 dead, 46 missing due to monsoon-induced disasters in Nepal
5 hours ago