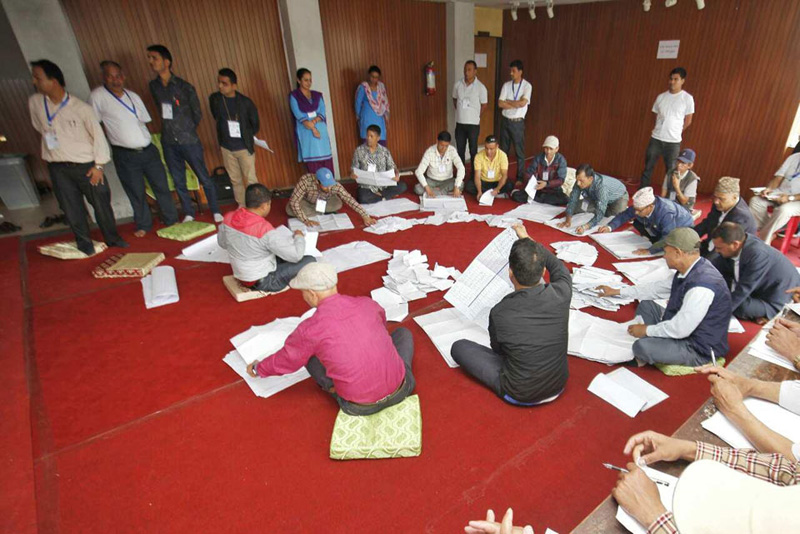 What we need right now is a healthy debate on voting system
After successfully conducting the first phase of local election in 34 districts, the Election Commission now has the responsibility of counting votes. The votes should be counted accurately, and with the principle of neutrality. Deciding the winners is crucial but convincing losers about the integrity of the counting process is as vital.

Yet the vote counting is progressing at a glacial pace. Of course, the existing electoral system, with the cornucopia of political parties and independent candidates, could be one reason for the delay, but we cannot deny that the process could be made a lot faster. If we see social media, people are mocking the pace and predicting that it could take more than 200 days to count all votes in Kathmandu alone.

Some are advocating for the use of electronic voting machine (EVM) and internet/mobile voting to save both time and money. Such tools aim to make voting and counting stress-free, and much faster.

If we introduce EVM or internet voting, millions of Nepalis outside the country could also vote and they will thus be a part of the democratic process back home. Such efficient systems will also increase voter turnout. They can be easily audited and they reduce errors that are the result of human fallibility.

While highlighting the benefits of a voting machine, we also have to factor in their limitations. There are reports in credible news outlets in developing countries that claim that EVMs can be easily manipulated and hacked. One of my engineer friends says electronic voting is the most dangerous threat to democracy and that the results can be easily fabricated.

There are in fact instances when such technologies have created conflict. In the recent municipal election in Delhi, the Aam Aadmi party accused the Indian Election Commission of manipulating the EVMs in favor of Narendra Modi and his BJP party. Similarly, the Netherlands and Ireland recently opted out of EMVs citing lack of transparency and chances of tampering with the system.

In Nepal, too, the Election Commission has thought about EVMs. Back in February, the commission had to halt the process of buying EVMs through an international company called Smartmatic, again citing tempering concerns as well as lack of voter education and high cost. One of the reasons the commission had to drop its plan to buy from Smartmatic was that it transpired that its EMVs, which were used for elections in Venezuela in 2004, could have been compromised.

Similarly, the Election Commission of Nepal has already tested the EVMs in the first Constituent Assembly election. Even in 2013’s second CA election, the commission planned to use EVM in a few districts but couldn’t do so as the machine could not fit in all the political parties in fray. Besides, not all the political parties are sold on the idea and if the whole election had to be conducted with electronic machines, it could prove quite costly too.

So there are both pros and cons about the electronic voting system. And before we adopt it, we also need to ensure sufficient human and financial resources to run it. But since adoption of EMV is largely a political decision, unless our political parties are convinced, it would be impossible to introduce it. Hence what we need right now is a healthy debate on proper voting system for Nepal.

The author is a political science graduate from Tribhuvan University

The store’s advertisement marks the second time the island has put out a call for people to migrate. In response... Read More...