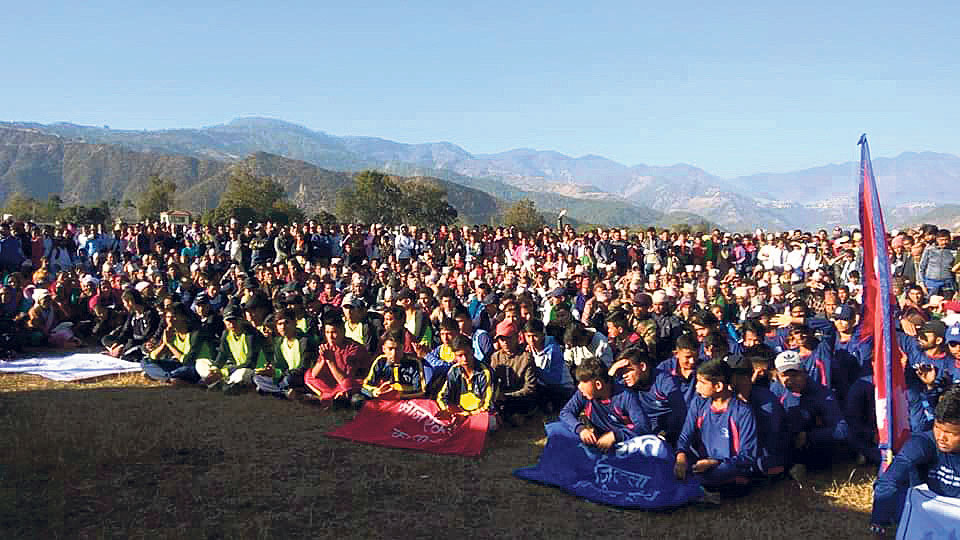 Spectators watch a cricket match during the Karnali Province T20 Cricket Cup in Rukum in this recent photo.

Jan 12: Nepali cricket recorded historic achievements last year, both as a team and in individual level as well.

Earning the status of One Day International (ODI) was a great achievement for the national team while Sandeep Lamichhane’s outstanding performance in one after another international platforms was an exemplary achievement attained by a young Nepali cricketer that has inspired Nepali youths.

The new opportunities inspire emerging players and simultaneously provide alternative cricket ground that can be upgraded into something substantial at international level. Similarly, the recent scores in MM Cup suggest Nepali batting took another stride. Recently, Binod Bhandari, Bishal Sushling and Prem Tamang scored centuries for their respective teams and other numerous half-centuries, including Bhim Sarki’s 96, and 300+ team totals batting first in only first five days of the 50-over competitions. Six months ago, PM Cup saw four centuries in the whole 15-day tournament.

Likewise, Nepal national players are set to receive the pending salaries of last two years (2017 and 2018) as informed by ICC and will provide it monthly from 2019 onward. The players’ salary was blocked due to suspension of Cricket Association of Nepal (CAN).

Nepal is the only cricket nation to have three premier T20 events and paid 60,000 USD to ICC last year. An amount that is more than enough to set up a domestic structure in the nation if the CAN was not suspended.

A minimum of 42 foreign players collected paycheck from Nepali franchises in addition to 234 Nepali players who were paid a minimum of Rs 25,000 to Rs 750,000 each according to the variation of base prices and auction money.

Similarly, a marquee player or captain of franchise in all three leagues who get more than the upper limit of Rs 750,000. For example, Hari Bahadur Chauhan, who made his debut at the Prime Minister Cup (PM Cup), went on to get Rs 100,000 contract for Butwal Blasters in PPL and Rs 80,000 in Everest Premier League (EPL) for Biratnagar Warriors.

He further secured a contract with departmental team Tribhuvan Army Club representing them in Manmohan Cup held at Inaruwa by the start of 2019. His credibility grew exponentially after he scored a century and took a hat-trick in same match for Province 4 against the Province 1 in the inter-provincial PM cup held in May-June last year (the start of Nepali calendar year).

Similarly, his provincial team member Bipin Khatri also made a fortune with couple of contracts heading his way for Rs 25,000 in PPL and Rs 95,000 in the third edition of DPL.

He was already contracted with EPL for Pokhara Rhinos which they renewed for the last season as well.

The success of Nepal in the international arena simultaneously was complimented by domestic premier leagues. Ideally, not the kind of format that should be over-played but at very least it has spurred a kind of revolution in Nepali provinces to have their own premier cricket entity with local stakeholders and corporate houses funding the leagues and players.

Sindhupalchowk’s Super 8 Cricket Tournament played at Paanchpokhari promises to turn into something big with the enormous local support.

A 10-over per side game at Bhedichaur Cricket Ground hosted by Taltung Youth Club started at Palpa.
Similarly, Karnali Province T20 Cup at Nakhira Cricket Ground of Rukum was observed by thousands of local supporters proving the passion and love for the sport even in remote hill districts.

Grounds
Tribhuvan University international cricket ground remains the home of Nepali cricket for the time being. Mulpani Cricket Ground took significant step toward its completion after an issue regarding its land acquisition was solved toward the end of last year.

The announcement of third edition of DPL to be hosted at Fapla Cricket Ground, Dhangadhi the proposed international cricket stadium, should be taken as another solid stride toward providing yet another alternative for international venue.

Also, an area proposed for a sport venue but neglected for years and turned into a cow grazing field was upgraded as Lamahi Cricket Ground in the leadership of local community.

The ground is set to host the women’s national cricket matches during the upcoming eighth national games. Nepal Sports Council (NSC) has appointed Prafulla Sagar Pradhan as the chief curator for the ground and asked to prepare five wickets for future use. Local cricket club Deukhari will be assisting in arranging necessary materials.

NSC has already invested Rs 7.5 million in the ground while additional 30 million is in the pipeline to develop the ground as an international venue, said the City Development Committee of Lamahi.
Similarly, 8th National Games has also helped build Kohalpur Cricket Ground led by Lekh Bahadur Chhetri. He is credited for establishing the first women cricket team of Nepal in Nepalgunj, Banke. The same ground hosted Nepalgunj T20 Cup in 2018.

The locals firmly believe that the ground will be the biggest one in Province 1 and can be upgraded to international standards with some investment. The ground has already hosted 7th national women’s cricket, women’s Prime Minister Cup, three editions of Itahari U-19 premier league and Itahari T20 Cup in past few years.

Likewise, the Dhurmus-Suntali Foundation is collaborating with Bharatpur Metropolitan City in Chitwan district to get the ground of Agriculture and Forestry University at Rampur as a possible location to construct the proposed ‘Gautam Buddha International Cricket Stadium’. The Metropolitan City will acquire the land on lease to build the stadium.

While MM cup has helped Inaruwa of eastern Sunsari district to enter Nepal cricket’s map, Narayani Cricket Ground in mid-Tarai town Birgunj remains idle. The ground was first initiated by late TB Shah who upgraded it and used it for the development of cricket in 2002.

Marred by internal disputes of Nepal Sports Council and Parsa Sports Union, no matches have been held in recent years in the ground where current skipper Paras Khadka, Vice-captain Gyanendra Malla and Sharad Vesawkar, among others, played in 2005. The issue regarding the compensation of local landowners has become a major challenge in building the ground.

Age-level
Jonty Rhodes visited Nepal to help Nepal Cricket School players to learn the finesse of cricket. U-19 cricketer Pawan Sarraf credits the coaching stint with the South African legend that helped him grow as a player. It made difference in his mindset and attitude regarding cricket.

Similarly, Nepal Tiger Sports Club hosted school cricket cup participated by 14 academics in Nepalgunj which was approved by the deputy mayor of the city Uma Thapa.

The new head coach has already stressed that the importance of women’s cricket and its participation in international events mustn’t be limited to just formality.

Players like, Anil Sah, Rohit Kumar Paudel and recently Pawan Sarraf give a chunk of credit to Das for improvements as player.

Women cricket team heading to play Thailand T20 Smash and simultaneously preparing for the ICC Women’s World T20 Asia Region Qualifier are already in awe and booming with self-believe that new mentoring has had on them.

“Players are optimistic after gradual development in the camp. Now we feel more confident to play long innings. We are in good mental state. We expect to do well in the upcoming tournament,” Rubina Chhetri, the captain of national women cricket team, told Republica before heading Thailand to participate in the T20 smash.

It is safe to draw conclusion that women cricket will be helped immensely under the guidance of Das. Women cricketers expressed confidence that they too can achieve success just like the men’s team did in international cricket last year.

CAN reinstatement
The ICC had suspended the Cricket Association of Nepal (CAN) in April, 2016 citing government interference. The suspended committee (the elected body) of the CAN decided to withdraw the writ petition filed in the Supreme Court in October last year. The suspended CAN had called the board meeting to discuss the procedures and the officials agreed in principal to take back the writ, informed CAN Secretary Kiran Rana in a press release.

“As requested by the International Cricket Council, we have decided to withdraw the writ petition and pave way for the reinstatement of the CAN membership,” said Rana. “The meeting nominated President Chatur Bahadur Chand and General Secretary Ashok Nath Pyakurel along with Diwakar Ghale, Sailesh Kumar Chaudhary and Sanjay Singh to coordinate with stakeholders and start the process of writ withdrawal.”
The controversy had begun after the National Sports Council (NSC) formed the ad hoc committee without giving approval to the elections of the CAN and the ICC suspended the membership of CAN. The elected committee moved the court and the ICC formed the Nepal Advisory Group to prepare the new statute.

The elected committee opposed the idea of new statute, the ICC agreed to amend the existing one and move forward. The controversy stood as the General Assembly of CAN last year failed to pass the statute as suggested by the ICC. A step-by-step formation of the district working committees, the provincial working committees, and a central working committee is to be done as per the reinstatement process. The association had adopted the revised constitution at its Special General Assembly on April 19, 2018. The revised statute has already been endorsed by the NSC.

Conclusion
The fact that everything is happening, improving and progressing in the absence of CAN mainly due  to two reasons- Nepal acquiring ODI status and Sandeep Lamichhane making Nepal proud around the globe.

2019 might be the year Nepal realizes true potential of Nepali cricket when more players like Lamichhane are identified, multi-day cricket is established and smooth governance from the apex body collectively puts Nepal into mainstream tier of international cricket.