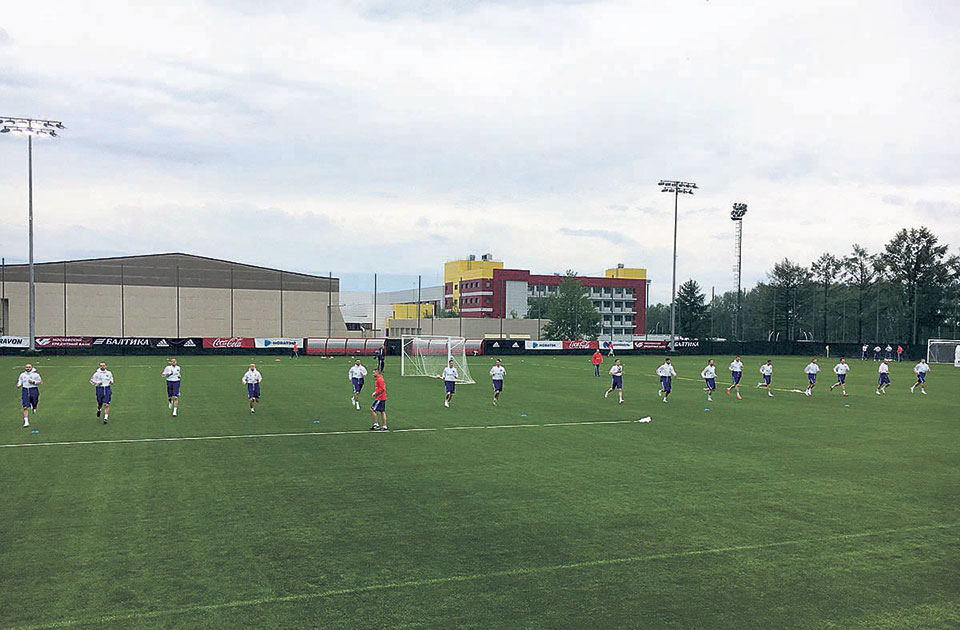 Players of Russia attend a training session in Moscow, Russia in this recent photo, ahead of their 2018 FIFA World Cup.

KATHMANDU, May 28: As Russia is making its debut as a host in the 2018 FIFA World Cup, which will start from June 14 to July 15, the pace of the football's biggest festival is really going in a certain direction.

Russia has been involved in the latest doping scandals when 41 of its Olympic medals were stripped for doping violations which is the most by any country.

During the Pyeongchang Winter Olympics in February 2018, two Russian athletes Aleksandr Krushelnitckii, who won a bronze medal in the mixed doubles event and Nadezhda Sergeeva, who finished 12th in the two-woman event from the Olympic Athletes from Russia (OAR) failed their doping tests and were disqualified.

Despite the two disqualifications, the International Olympic Committee (IOC) announced to reinstate the country's Olympic membership on February 28. Even though the Russians were given the Olympic membership, it's still unsure whether the upcoming grand event World Cup would be fair and without any controversies.

FIFA later confirmed that the racial abuses were targeted to the Frenchmen and had opened a disciplinary action against Zenit St Petersburg, who will also host a semifinal match of the World Cup.

Introduction
Russia as a host country will see the environment favorable for it to win its opening match against Saudi Arabia on June 14, and also considering the home support it will have, it certainly will be hoping to at least clear the group stages with the virtue of the group runner-up.

Young midfield
Two young central midfielders Roman Zobnin (24) and Aleksandr Golovin (21) are arguably the best set of young midfielders Russia could ever wish for along with the highly talented playmaker Alan Dzagoev, who was once taken as one of the biggest prospects of Europe, and has a point to prove in the World Cup as he will turn 31 when Qatar hosts the World Cup in 2022.

Experienced keeper
It would be rather incomplete to end Russia's strength on this without talking about the first choice goalkeeper and captain Igor Akinfeev whose heroics was the key when Russia, under the then coach Guus Hiddink, reached the semifinals of the Euro 2008, the last time the Russian team managed to advance into the knockout rounds.

Weaknesses
There are more weaknesses of Russia than the strengths as the hosts dwell with a long list of injuries to its players. Two of its central defenders Georgy Dzhikiya and Viktor Vasin have suffered from terrible knee injuries, and their replacements Fyodor Kudryashov, Roman Neustaedter and Vladimir Granat, who were put into test in a 3-1 defeat to France in a friendly match, could not showcase their talents.

Two of the top three goalscorers in the Russian Premier League Fedor Smolov, 14 goals, and Aleksandr Kokorin, 10, are out with a knee and a cruciate ligament injury respectively, which might hurt the Russian frontline. Smolov might return back in a few weeks and might also play in the World Cup, but Kokorin's long and unknown return to the team may cost Russia some attacking flairs.

The replacements Anton Zabolotny and Dmitry Poloz have failed to prove their point for the European nation. Russia might also use Artyom Dzyuba who has cracked 11 goals in 22 games for Russia.

Uruguay
Introduction
Uruguay is the best contender to top the group considering its squad depth supremacy and the attacking talent it has on its side.

After getting knocked out in the round of 16 by Colombia in the 2014 FIFA World Cup, forward Luis Suarez and co will be looking to get past the humiliation of failing to reach the World Cup final after it last won it in 1950.

Squad depth
Uruguay has a very competitive squad and top players from major European leagues to fight in each position. Uruguay is one of the few teams in the finals to have both defensive supremacy and attacking superiority.

With the likes of the Atletico Madrid center back pair Jose Gimenez and captain Diego Godin, Uruguay is very compact in the defensive perspectives, while it also boasts the presence of Sporting's Sebastian Coates and Lazio's Martin Caceres, who are very good for rotation can do well in the central defender roles.

The South American team has Malaga's Federico Ricca as a left fullback who is supported by Argentinean club Independiente's Gaston Silva, they both can play as center backs too. Uruguay has a very secure defense line and with Uruguayan club, Penarol's Guillermo Varela and Porto's Maxi Pereira who are right fullbacks and they should keep the defense line compact and solid.

Midfield rejuvenation
The midfield was always an area of concern for Uruguay, but with three young midfielders in Deportivo's Federico Valverde (19), Argentinean club Boca Junior's Nahitan Nandez (22), and Juventus' Rodrigo Bentancur (20), the center of the park is stable and ready to perform at the grand stage.

Nandez and Bentancur are left and right attacking midfielders, while Valverde is a central midfielder. They are supported by Inter Milan's Matias Vecino in the defensive midfielder role with PSV's Gaston Pereiro, Seattle Sounders' Nicolas Lodeiro, Sampdoria's Gaston Ramirez and Penarol's Cristian Rodriguez.

Attacking superiority
A big attacking pair name of Suarez and PSG's Edinson Cavani will be a crucial part in Uruguay's goalscoring bid. Cavani has scored 40 goals and provided 12 assists in the 48 games he played this season for PSG, while Suarez scored 31 goals and gave 18 assists in 51 games for Barcelona.

They will be supported by Hull City forward Abel Hernandez, Celta's Maxi Gomez and Girona's Christian Stuani. So it can be expected of Uruguay to top its group and at least make it to the quarters. The life beyond that round could be difficult.

Egypt
Egypt is playing in the World Cup after a long absence as it had last played in the finals 28 years ago in 1990.

The team led by Liverpool winger Mohamed Salah, who suffered a dislocated shoulder injury in the Champions League final match against Real Madrid on Saturday. According to reports, the dislocated shoulder takes between 12 to 16 weeks to recover, while the World Cup starts in 18 days. Meanwhile, Salah is confident that he will make it to the World Cup.

Introduction
Egypt got qualified to the World Cup after finishing first in Group E which had Uganda, Congo, and Ghana, who had reached the quarterfinals of the 2010 World Cup, but finished third this time CAF qualifying third round.

Squad
Goalkeeper Essam El Hadary, 45, will be the oldest player to play in the World Cup finals. He has played for clubs from Switzerland, Sudan and is not with Al-Taawoun in Saudi Arabia. He should be quite familiar with some of the players he played with or against in Saudi and how they naturally play.

Egypt can do well with the experience of Hadary, but his poor decision making and laps of concentration can be a dangerous thing sometimes. His backup Ahmed el-Shennawy was ruled out of the World Cup after he suffered a severe left knee injury. So, Al-Ahlu's Mohammed el-Shennawy is a possible replacement for the Pharaohs.

Hector’s task ahead
It could be a crucial area of concern for Egypt's Argentine boss Hector Cuper, who led the African team to the final of the 2017 African Cup of Nations, only to suffer a defeat at the hands of Cameroon.

Defense and midfield
West Brom's Ahmed Hegazy and Ali Gabr are the pillars of the Egyptian defense line, while Ahmed Fathy and Mohamed Abdel-Shafy will run through the flanks as full backs. Saad Sameer, Ahmed Elmohamady, and Ayman Ashraf are their replacements.

Mohammed Elneny has the job to control the midfield and build flowing and attacking football, along with Abdallah Said, Tarek Hamed, and Saleh Gomaa, who will be rotated.

Salah’s injury: A major blow
Up front is Ramadan Sobhi in the left with his backup being Mahmoud Hassan (Trezequet), while Salah in the right. In light of the injury to Salah, Trezequet could play in the right as well. Mahmoud Abdel-Monaim (Karabah) could be leading the attack line.

Salah’s injury is a major blow for Egypt as the Liverpool forward, who scored 44 goals and provided 16 assists in all competitions for Liverpool this season. He might be back earlier than the scheduled date as Egypt medics have committed in completing his recovery in about two weeks time.

Saudi Arabia
Saudi Arabia has qualified for the World Cup finals after eight years of absence in the competition as it last made its appearance in the 2006’s edition. Having since been knocked out of the group stages in 1998, 2002 and 2006 editions and losing 1-3 to Sweden in 1994 in the round of 16, Saudi has not made any more progress in the World Cup.

Managerial changes
Having seen five managerial changes in nearly about three years, Saudi’s Argentine coach Juan Antonio Pizzo took the helm from the other Argentine Eduardo Bauza as he was sacked just two months after being appointed on September of 2017.

Pizzi would be looking to take the team at least till the round of 16, as he had failed to take Chile to the World Cup.

Defense line
32-year-old goalkeeper Waleed Abdullah is the main man to be between the sticks for the Arabs, while Yasser Al Mosailem is the backup for the Al-Ahli shot stopper. Pizzi had called up two extra goalkeepers as for the recent friendlies Fawaz Al-Qarni and Abdulquddus Atiah.

The defense line will include Osama Hawsawi and Omar Hawsawi in the main center back roles, while they will be supported by backups Mansoor Al-Shahrani and Motaz Hawsawi. Saaed Al Mowalad and Mohammad Al-Breik will fight for the right back position, while Ali Al Bulaihi is the only natural left back in the team.

Creative midfield
The 25-year-old Holding midfielder Abdullah Otayf is arguably the best player in the team and is often compared to the likes of Croatia’s Real Madrid midfielder Luka Modric. He has scored one goal in 14 appearances for the Green Falcons.

The second most capped player and only four behind Osama, Taisir Al-Jassim is one of the integral part of the Saudi team. He maintains balance, gives support to Otayf by tracking back and also carries the ball forward to feed the attackers. He will be supported by talented playmaker Al-Sehri.

Talented wide players
The two talented and skillful wingers in the team, Salem Al Dawsari and Fahad Al Muwallad will be very vital in breaking the opponent’s defense line with swift breaks and passing football, which Pizzi wants from his players.

Misfiring attack
There are only two fixed attackers in the team Mohammad Al-Sahlawi and Muhannad Assiri, both 33 year olds and misfiring against tough defense line, while Nasser Al-Shamrani, Hassan Al-Raheb and Abdulfattah Adam were called-up against Iraq on February this year.

The four teams go head-to-head against each other and only two will reach the round of 16. 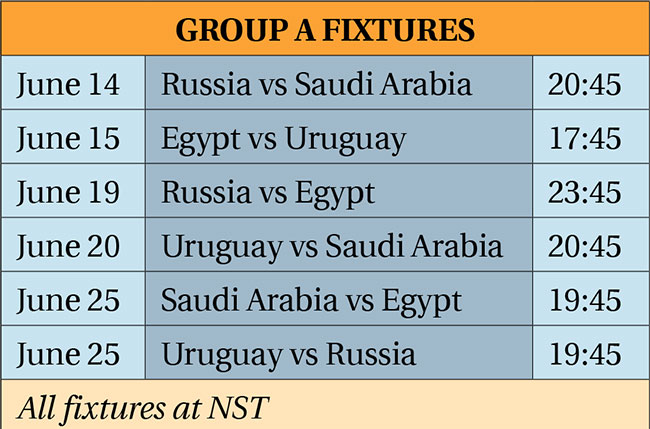