200k marigold garlands to be imported for Tihar 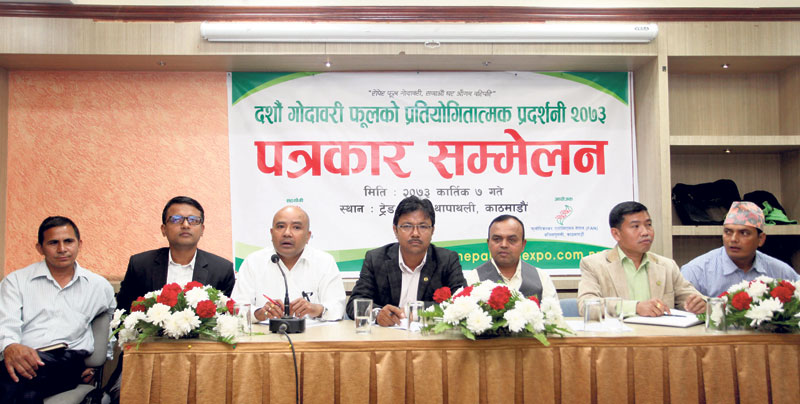 LALITPUR, Oct 24: Nepal is set to import around 200,000 units of marigold garlands worth around Rs 5 million for the Tihar festival after domestic production failed to meet the market demand.

The market had faced shortage of flowers last year due to blockade, according to florists.

Data shows demand for flowers is increasing by 15-20 percent every year. But domestic production is not increasing accordingly.

Bishwa Mani Pokhrel, secretary of the Floriculture Association Nepal (FAN), said there is a demand for 1.1 million units of garlands for Thar. “As only 900,000 units can be managed through domestic production, we are importing 200,000 marigold garlands from India,” he said, adding: “Nepal, however, is self-sufficient on bachelor button (makhmali flower) which is a most have flower on the day of Bhai Tika.”

FAN President Kumar Kasaju Shrestha said millions of rupees can be saved annually by promoting commercial farming. “We should adopt new method and technology to increase production which is growing with each passing year,” he said.

Shrestha said the Kathmandu Valley alone needs 600,000 units of marigold garlands for the Tihar festival. “Similarly, cities outside the valley need around 500,000 garlands,” he said, adding that a garland costs between Rs 50 and Rs 100.

Sitaram Pant, a florist, told Republica that there is no alternative to importing flowers from India as domestic production cannot meet the demand in the market.

According to florists, the valley needs 800,000 units of marigold and bachelor button garlands for the Tihar festival. Flowers grown in Dhading, Nuwakot, Chitwan, Kavre and Makwanpur are brought to the Kathmandu Valley for Tihar.

Nepal also imports around 50,000 garlands annually to countries like Japan, the US and Australia, according to FAN.

Flower exhibition from Wednesday
Floriculture Association Nepal (FAN) is organizing 10th Godawari Flower Exhibition on October 26-29 at the Jawlakhel grounds on the occasion of Tihar and Chhath festivals.

Min Bahadur Tamang, general secretary of the association, said that the exhibition was being organized to promote the Nepali floriculture sector.

According to Tamang, there are 675 commercial flower firms/ nurseries in the country and that the sector employs 41,000.

Around 300,000 garlands imported from India for Tihar

KATHMANDU, Oct 19: Around 300 thousand garlands have been imported from India for this Tihar festival. These garlands are only... Read More...

BHAKTAPUR, Oct 17: People of the Banmala community in Tathali of Bhaktapur are busy these days making garlands of globe... Read More...

Import of sanitizer sees a significant decline in the first two months of the current FY
16 hours ago
U.S. offers payments, relocation to family of Afghans killed in botched drone attack
20 hours ago