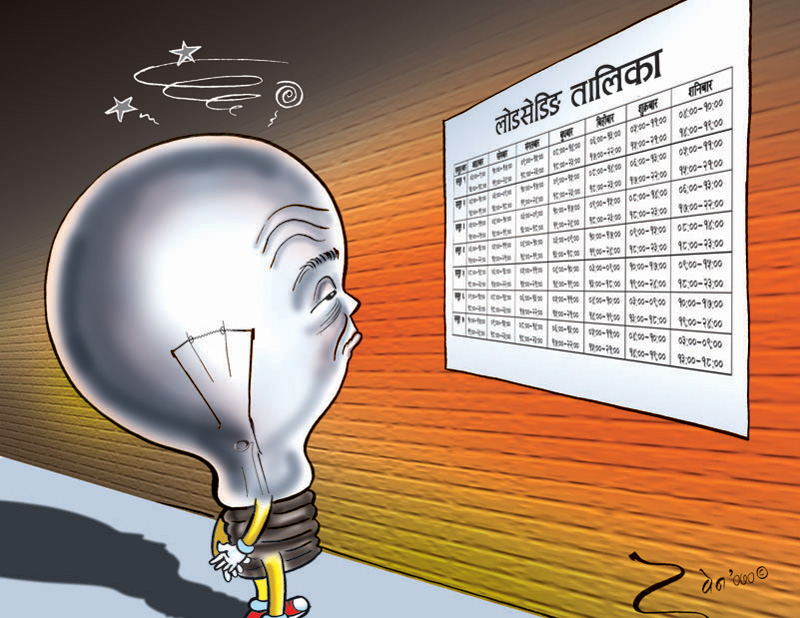 Nepal should ideally be in a position to export power, not import it from other energy-starved countries.

Unlike most nations with finite natural resources, we are blessed with colossal water resources. The assessment is that Nepal can produce three percent of electricity the world needs, which comes to around 43,000 MW. But we are currently producing only 600 MW, against the demand of 1,300 MW.

Due to finite amount of resources and high cost of non-renewable energy, countries like France, Russia, Ukraine, Hungary, Japan and the US have also used nuclear energy for power generation. Though the initial setup cost is high, nuclear energy is cost effective in the long run, emits no greenhouse gases and is environment-friendly. Nuclear energy today accounts for 13 percent of world electricity.

But nuclear energy is not always reliable. Ukraine experienced a devastating nuclear accident in 1986 because of a flawed reactor design and serious errors from plant operators. Japan also faced similar problem in 2011 after a tsunami disrupted power supply and cooled the nuclear reactors.

But there are options. Many countries are shifting to solar power. With better technology, solar energy is also becoming cheaper. While solar energy currently makes up only 1 percent of world electricity, the International Energy Agency indicates that it has the capacity to produce up to 16 percent of world’s electricity. Thus the clean solar power is poised for a take-off.

Nepal is yet to capitalize on its solar potential. According to an estimate, Nepal can harness 2,920 gigawatt hours of energy a year from solar, by using only 0.01 percent of our total land. But there has been little homework on this.

Nepal should ideally have been in a position to export power to India and beyond, not import power from other South Asian countries that are struggling to produce enough power for their own people.

Bhutan, a land-locked and mountainous country like Nepal, has been very successful in harnessing its energy potential. It currently produces 1,488 MW of hydroelectricity, and is planning to harness 10,000 MW by 2020.  It exports most of this electricity to India and its hydropower export make up 40 percent of their government revenue and comes to 25 percent of GDP.

Just like more than a quarter of Nepalis today still does not have access to electricity, the same was the case in Bhutan until two decades ago. But with fast development of its hydropower sector, the country has been able to achieve self-sufficiency and sustainable development.

Despite having ample water resources, Nepal has failed to harness them. Budget is not the problem. People have always been enthusiastic about investing in hydropower. The problem rather lies with slow bureaucratic approval, policy level hassles and delay in project implementation. Besides, there is no energy strategy plan to streamline hydro development. Political instability has made matters worse, leaving potential investors greatly frustrated.

A clear hydropower investment policy could go a long way towards removing these hurdles. Since we have abundant water resources, we do not even need to resort to other sources of energy that more developed countries are using. If we can only better harness our hydro resources, we can lift Nepal out of darkness, permanently.

As we face daunting development challenges, and since these challenges will be impossible to remove without more power, it is high time to invest in hydropower (and in the clean solar power) in order to make Nepal self-reliant in energy.

It would be premature to be happy with the current state of no load-shedding. If India tomorrow curtails power supply, to meet its own requirements or for some political reason, we will be back to the dark old days.

The author is an alumni of
Henan University of Technology (HAUT), China

Social values are declining and absence of youths put their conjugal life and other relations in jeopardy ... Read More...

A newly opened joint at mid-Baneshwor, it is quite easy to locate Dining Park Restaurant and Lounge Bar as it... Read More...