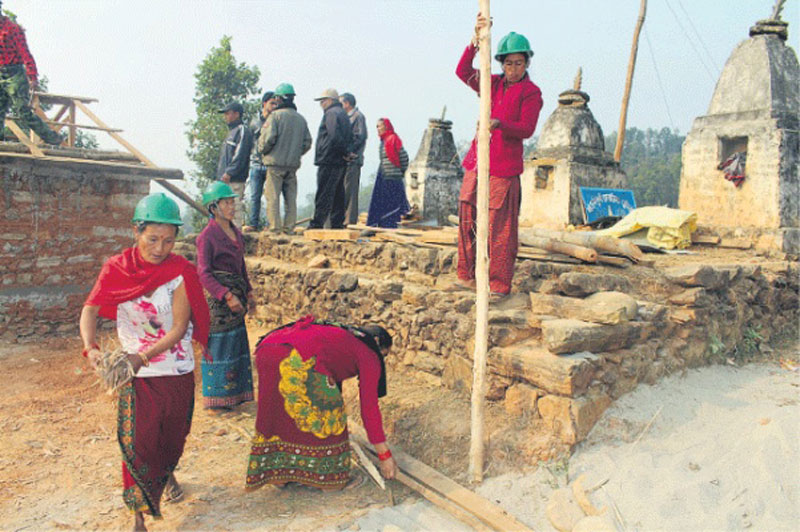 Women are venturing out to work but men have not reciprocated by increasing their time on family duties
Nepali women have greater access to jobs than their counterparts in other South Asian countries, but this may come at a heavy cost in terms of time. Women’s time constraints—and how to optimize women’s labor market opportunities while taking into consideration their unpaid labor at home—emerged as a major theme at the “Smart Policy for Women’s Economic Empowerment” event in Kathmandu last Thursday.

The event featured women leaders from four South Asian countries, and inaugurated a two-day series of activities matching policymakers with international researchers from groups such as Evidence for Policy Design (EPoD) at Harvard Kennedy School, the research initiative that I work for.

Bimala Rai Paudyal, an academic and experienced Nepali policymaker, listed some reasons behind Nepal’s high rate of female labor force participation: globalization, laws that increasingly support women’s employment, and the fact that large numbers of men are migrating out of the country to work. She described Nepal’s 80 percent rate of female labor force participation as a mixed blessing: “Male migration has left women behind, who have no option to work outside the home. Because they are de facto managers of household, they have the responsibility of earning as well as taking care of the household.”

Paudyal added that woman’s time burden remains even when the man stays in Nepal and there are two earners in the household. Women are increasingly venturing outside the home to work, but men have not reciprocated by increasing their time use on chores and family responsibilities. The result, she said, is that “women involved in economic activities outside the home are severely constrained with time poverty.”

The situation may be similar in rural India. In an interview, Dr. Chhavi Rajawat, the elected head of the Village Council of Soda in Rajasthan state, told me that women’s perspectives on agricultural labor are not taken into account, even though they do much of the work. “They are the ones who are tilling the field, the ones taking care of the family, the ones milking the cow, the ones taking the cows out for grazing. And yet, when you go to speak to the farmer, you’re essentially thinking of the man and not the woman.”  Dr Shirin Sharmin Chaudhury, the Speaker of Jatiya Sangsad (the National Parliament of Bangladesh), put numbers to this phenomenon in her address: “Women produce 60 to 80 percent food, and play a major role in preventing food insecurity. Yet, women farmers are often invisible.”

The importance of women’s time allocation can also be overlooked by researchers when evaluating the effect of policy on female empowerment. Rohini Pande, Mohammed Kamal Professor of Public Policy at Harvard Kennedy School and Co-Director of EPoD, explained how a study on microfinance in India found that these small, collateral-free loans had no effect on women’s self-reported decision-making power in the family. However, the study’s findings also suggested that the loans changed women’s time allocation toward self-employed activities. “This is a good reminder that there is a lot of nuance in the link between economic opportunities, social norms, and the choices that men and women make,” Pande said.

It will be difficult to change the traditions that dictate that women bear more responsibility for household and family labor. However, Charity Troyer Moore, EPoD’s India Research Director, said that one should not assume that such norms are immutable, and pointed to policies that can “shift the cultural factors surrounding women’s economic engagement.” She cited research in the relatively conservative state of Madhya Pradesh, India, where a policy experiment that paid workfare wages into a digital account in a woman’s own name (rather than a household account, often controlled by a man) increased women’s engagement in economic activities. “This suggests that her household bargaining power was increasing just by the fact that the wages she was supposed to be earning were paid to her.”

There are many potential benefits of policies that help women enter the workplace, and these were highlighted by participants from Bangladesh—a country with a good record on translating women’s labor force participations into benefits for their wellbeing. Rubana Huq, Managing Director of Mohammadi Group, said that pay is equal in the garment sector and employers are prohibited from asking if a woman is pregnant when hiring. Around 8,000 of Mohammadi Group’s 12,000 employees are women, and the company provides crèches and daycares in its factories. Comparing the situation today to that before the boom in the garment industry, Huq said, “In general if you look at the lives that the workers have, they’re far better than Bangladesh would have ever imagined.”

“Smart Policy for Women’s Economic Empowerment” was hosted by EPoD in collaboration with the Institute for Financial Management and Research (IFMR-LEAD) in India and the Nepal
Administrative Staff College (NASC). This is the second in a series of articles on the event.

RAUTAHAT, Jan 17: Sugarcane farmers in Rautahat have received instant payment from mills for the first time in a decade. ... Read More...