17 days on Kailali windstorm victims yet to receive aid 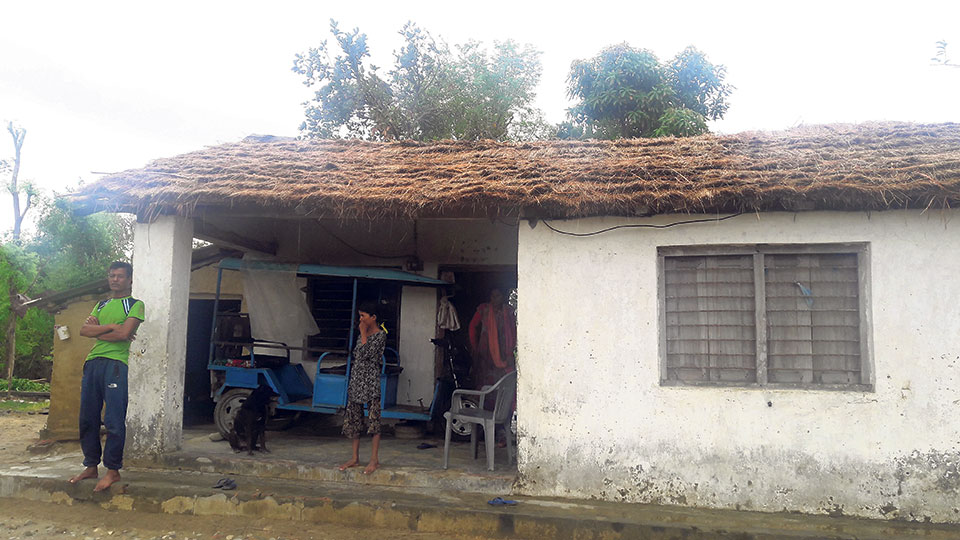 A house in Dhangadhi Sub-Metropolitan City -12 with a thatched roof. The storm had completely blown away its roof. Photo: Dil Bahadur Chhatyal/Republica

DHANGADHI, June 24: Life has yet to return to normalcy in the windstorm affected areas of Kailali district even after over two weeks since the disaster. Many of storm victims whose homes were damaged by the storm are living in makeshift shelters while some others are living in their damaged houses. Even though several organizations have reached out to the victims with aid, it has not been adequate, victims say.

“Although the District Administration Office (DAO) distributed corrugated sheets to some windstorm victims, we have not received any so far,” said Amar Singh, one of the storm’s victim in Dhangadhi. “In lack of corrugated sheets, we are covered our roof with hay.”

The windstorm on June 7 damaged a wall and roof of his house. Had he received corrugated sheets from the government, he would fix the roof.

“The monsoon has arrived, and if I could get the corrugated sheets now I would be able to keep my house dry. For the time being, I am only concerned about of fixing the roof. I am not in the condition of spending for fixing the wall,” Singh said.

With the monsoon started, storm victims like Singh are worried. I have thatched the roof with straw, but still rain seeps inside the house,” he lamented.

Different organizations have helped rebuild around 40 houses for the victims in Dhangadhi. But the total number of damaged houses is estimated to be over 1000. Some victims have been fixing their homes on their own while some are waiting for aid to come their way.

Pashupati Thapa, a resident of Dhangadhi Sub-Metropolitan City -12, complained that the concerned authorities have not even collected data of the storm victims and added that their response has been too slow.

“They have not even collected personal details of the victims properly. And if you talk about NGOs, they are reaching out to victims in easily accessible areas. Nobody looks at the poor people in remote areas,” she said.

According to Thapa, a lot of victims are yet to get corrugated sheets and other relief materials. “We lost not just a house, but also our belongings. It is challenging to carry on, but they have not provided even immediate relief,” she complained.

When the strong windstorm wreaked havoc, people had lost their houses, clothes, food stock, and other belongings within minutes. Thapa said that loss of food stock to storm means they have even more difficult days to face ahead.

Bohora admitted that the details of victims and the losses are yet to be ascertained. Due to the lack of exact data, relief distribution has been slow. Bohora is also the coordinator of the District Disaster Management Committee. “Tarpaulins and corrugated sheets are yet to reach some victims, and we are waiting to receive complete details from the field teams,” he said.

Sudurpaschim provincial government has announced aid for the storm victims. It has announced Rs 20,000 relief for victims whose homes were fully damaged and Rs 10,000 for those whose houses were partially damaged. The aid would be distributed once complete details of the victims are available, said Prakash Bahadur Shah, spokesperson of the provincial government and Minister for Internal Affairs and Law.

Lamkichuha, Tikapur and Ghodaghodi municipalities are also been waiting for details of the victim to come through for distributing relief.

Bohora informed that the details of the victims and the extent of damage would be collected soon. He added that ward chairperson has been tasked for coordinating this.

Nibra Bahadur Od, Mayor of Dhangadhi Sub metropolis, said that around 7,000 houses had been damaged within the sub metropolis. “There has been a huge loss in Dhangadhi. Around 7000 houses have been damaged,” he said. “Once we get complete details, we will start distributing the relief amount,” he added.

DHANGADHI, March 13: Four cadres of the Netra Bikram Chand-led Communist Party of Nepal (CPN) have been arrested in the suspicion... Read More...