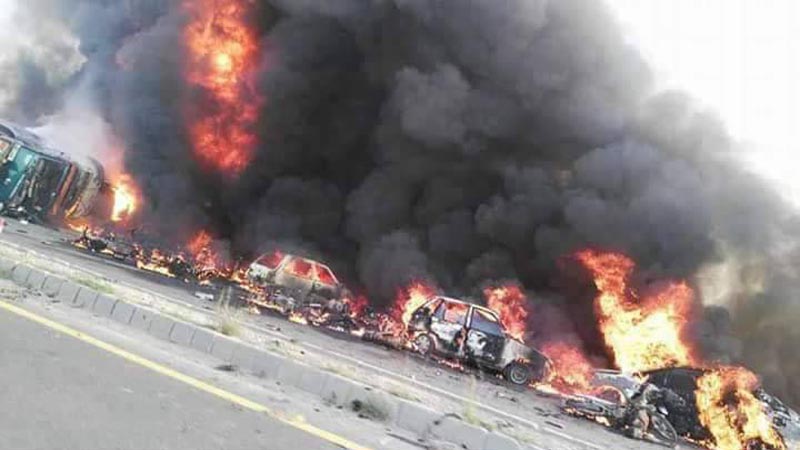 The horrific early morning tragedy came hours before Pakistan was due to begin Eidul Fitr celebrations marking the end of Ramazan.

The tanker carrying 40,000 litres of fuel overturned on a main highway while travelling from Karachi to Lahore, near the town of Ahmedpur Sharqia in Punjab.

Details were sketchy but some witnesses suggested the tanker had suffered a burst tyre, said regional police chief Raja Riffat.

"When it turned over the residents of the nearby village of Ramzanpur Joya rushed to the site with buckets and other containers, and a large number of people on motorcycles also came and started collecting the spilling fuel," Riffat said.

"After about 10 minutes the tanker exploded in a huge fireball and enveloped the people collecting petrol. It was not clear how the fire started."

Residents could be seen walking past blackened and twisted bodies piled by the side of the road. Earlier, television footage showed shooting flames and a thick plume of smoke as firefighters battled to extinguish the blaze.

The charred wreckage of dozens of motorcycles and cars could be seen scattered on the highway, along with kitchen utensils, pots, water coolers, jerry cans and buckets which victims had brought to collect the petrol.

Dozens of villagers and relatives of victims looked on from nearby farmland, many of them weeping.

"What kind of ill-fated day is today?" one woman asked tearfully. Villagers told AFP that many of the victims had been related to each other.

Hafiz Sohail said his uncle and cousin were among the victims. "Everyone in the family and the village is deeply shocked. Nobody is able to explain what just happened," Sohail added.

"It was all fire everywhere I saw. For quite some time I was unable to understand what was going on."

Mohammad Shabbir, another villager, said the driver was shouting for people to stay away as the petrol could erupt at any time, but no one listened. "What is the use of this petrol, what will you do it with now?" he asked, pointing at a bucket in his other hand.

"Many bodies could not be identified as they have been charred very badly," Riffat said, as provincial officials said DNA tests were being used.

Punjab Law Minister Rana Sanaullah told media the tanker driver had survived the crash and been taken into custody.

The air force sent a C-130 aircraft to help army helicopters evacuate the wounded, officials said. The nearest burns centre is believed to be more than 150 kilometres away.

Oil is a precious commodity for villagers in Pakistan, where more than 60 percent of the population survives on $3 a day, according to a World Bank survey.

"People were collecting oil in bottles, cans and household utensils. We tried to get them to move back before the fire started but no one was listening," Ahmed said.

He estimates that about 100 people from the small hamlet are missing.

BAHAWALPUR, June 25: An overturned oil tanker burst into flames in Pakistan on Sunday, killing 153 people who had rushed to... Read More...

UDAYAPUR, March 28: Ghurmi village in the district has become vulnerable to inferno after an oil tanker met with an accident along... Read More...