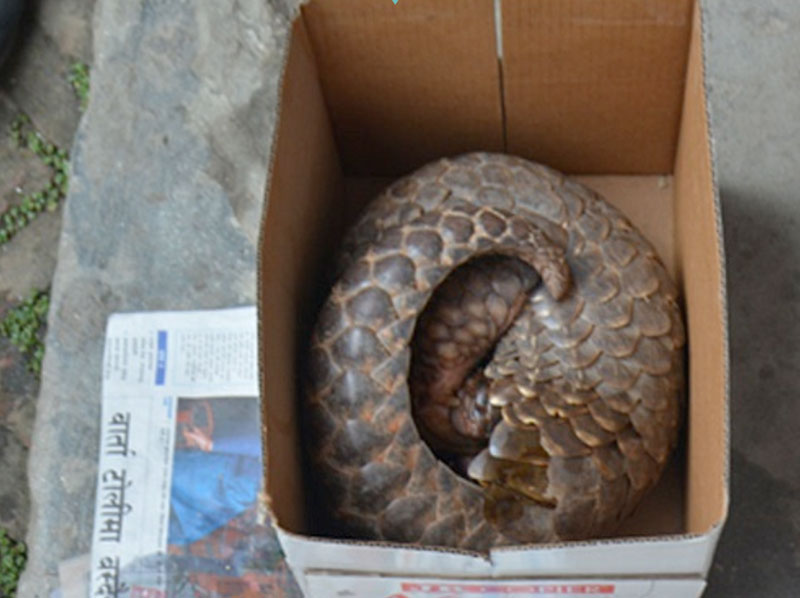 Conservation is not only about rhinos and tigers. Many little known species also need protection
As we approach the World Pangolin Day on February 18th, I recall a recent visit to a village called Namdu, which lies 30 km east of Charikot, Dolakha on the way to Jiri. The village is home to the Baiteshwor Higher Secondary School. It is surrounded by 30-40 scattered houses on the left of Lamosanghu-Jiri road. On our visit to the place we showed a picture of a wild animal to students of that school and asked if they have ever seen such species. Some of us may not have seen it for real, but not those students. The students were familiar with the small mammal because they have seen it in their villages.

Interestingly, they also knew how it behaves.

Namdu was the fourth village we went searching for the species. But not a single one could be located. But just an hour was enough for us to collect rich information about the species in Namdu.

It was the end of June, just a few days after the monsoon. The foot trails were slippery.

Excited by the response of those students, we didn’t stop to explore the forest and farms around the village. Hundreds of burrows and other signs were discovered. Sadly, none were recent ones. In fact, burrows are the most reliable signs that indicate those species live somewhere nearby. On our three-day stay, not a single fresh burrow or any other signs of the species students of Baiteshwor Higher Secondary School were familiar with was found.

The animal and signs we were searching for related to none other than world’s most trafficked mammal, pangolin. And we were there for a national survey and to monitor the trade of that critically endangered species.

The scaly ant-eater is the most trafficked mammal in the world according to some estimates. Its hard scales, meat and even blood are highly priced in Nepal, China and other south East Asian countries. Pangolin is also believed to have a mythical medicinal value. Namdu is also haunted by the same myth-led market demand.

Namdu is only one of hundreds of villages in Nepal which hosts pangolins. People are aware that pangolin is a protected species in Nepal and its trade is a punishable crime.

But, interestingly, no one has been arrested by enforcement agencies in the region for poaching and trading pangolin and its body parts.

Despite knowing that pangolin is a protected species, local people were actively involved in its harvest and trade. We were also told that, a few years ago, Namdu was regularly visited by middle-men who would stay for days to collect pangolins. This only stopped when not a single pangolin was left in the village.

When pangolin senses any danger, it rolls and covers itself with its scales so that even dangerous wild animals can do no harm. Still, they could not save themselves from greedy humans.

This indicates that it’s not only a limited public conservation concern; it’s all about incentives. Pangolins are ant-eaters. So they have their own ecological value for obvious reason. IUCN red-list and CITIS Appendix has no meaning to the villagers. They are only concerned about what they gain if they conserve pangolins. We do not have convincing answers to the communities neither does the government or any conservation agency.

Two species of pangolins—critically endangered Chinese pangolin and endangered Indian pangolin—are found in Nepal. Both species are protected in Nepal and upgraded from Appendix II to Appendix I of CITES in 2016. However, they are facing severe threats due to poaching, increased trade and habitat destructions.

Nepal is making excellent progress in curbing poaching of flag species inside Chitwan National Park and has been celebrating many zero poaching years for rhinos. At the same time many villages are approaching zero pangolin. The national survey shows 43 districts are homes to pangolins and mostly outside protected areas. This was the first survey in Nepal and pangolins are declining in all districts.

Namdu is only a representative village. Pangolins are disappearing from most places in Nepal. If this continues pangolins will be extinct from Nepal within our time. We are not only losing a critically endangered species but also hope for generations to come.

The author is a Nepal-based conservationist

With RPP pulling out, govt totters on the brink

KATHMANDU, May 2: With one of the major ruling coalition partners, Rastriya Prajatantra Party (RPP), withdrawing support from the Pushpa Kamal... Read More...

Iran took a significant step towards qualifying for next year's World Cup finals with a 1-0 win over China on... Read More...

Infographics: Arab world on the brink of new turmoil

Arab world on the brink of new turmoil ... Read More...