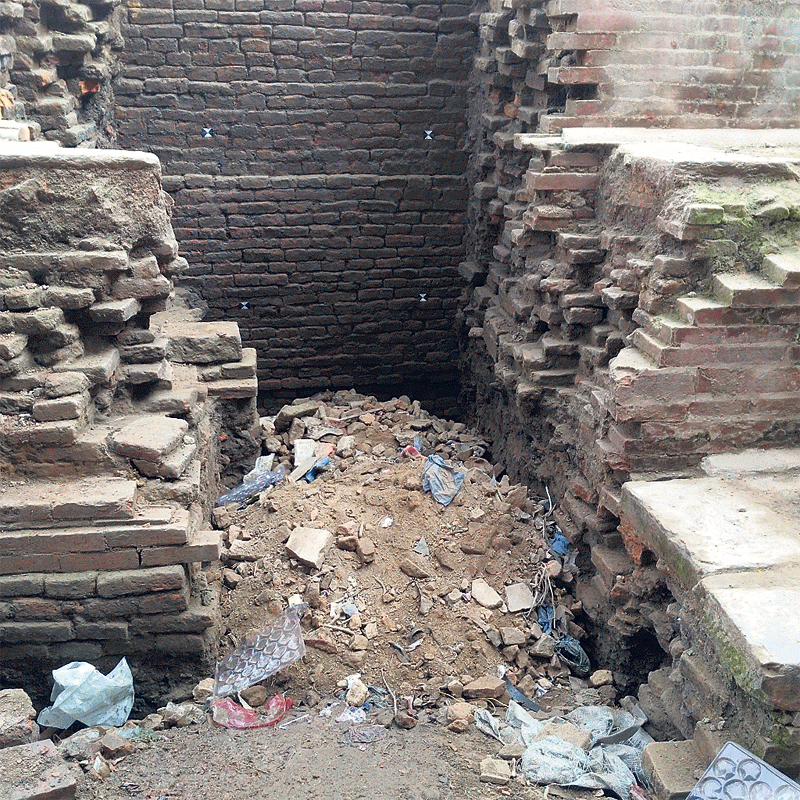 A pit dug in the south-east corner of the foundation of Jaisidewal Temple by a group of archeologists from the Department of Archeology and Durham University of UK filled with materials such as scrap plastics, papers and other trash in this photo taken on Wednesday.

KATHMANDU, Feb 1: Experts and locals have expressed their serious concerns over the ongoing reconstruction of the Jaisidewal Temple near Kathmandu Durbar Square as a pit dug up in the south-east corner of the foundation of the historic monument has been found filled with materials such as scrap plastic, papers and other trash.

A group of archeologists from the Department of Archeology (DoA) and Durham University of UK had conducted their archaeological research at the temple in December. The research was focused on studying and identifying the condition of the foundation of the temple after it collapsed during the earthquakes in 2015.
"Studying a monument by digging up the foundation is a great method. But it is wrong to fill the excavation pit using trash," Sumana Shrestha, a heritage conservation activist, told Republica. "It was a serious mistake on their part."

Shrestha blamed the DoA for failing to restore the originality of the foundation. "After the excavation, the site should have been refilled with the same materials as before but they didn't do that," she said.

She said that had they included local community in the task of taking care of the site, it would have been much better. "The local community can watch activities there and report illegal acts, if any, immediately," she added.

Kosh Prasad Acharya, an archeologist, said that the government has not made any criteria to refill an excavation pit "but it doesn't mean that they can use anything to fill the pit." He said that the pit should be filled with the same clay or other materials that were taken out during excavation.

"Sometimes, we have to reopen the same place for further study. So it should be filled with the original materials," he said.

Pramesh Shrestha, a local, claimed that the pit was filled by the DoA staffs themselves. "After completing the excavation work, they collected some antiques from there but filled the pit with scraps," he said.
Bhes Narayan Dahal, director general at DoA, however expressed ignorance about the matter. "We have finished our excavation work at the temple and have left the site," he said. "I don't know about any development after that."

Methane gas excavation to begin on May

DAILEKH, March 27: Excavation of petroleum methane gas is to be initiated from first week of May.  The methane gas... Read More...

KATHMANDU, April 6: Nepal and India have reached an understanding to revise the provisions deemed ‘unequal’ for a sovereign country in... Read More...