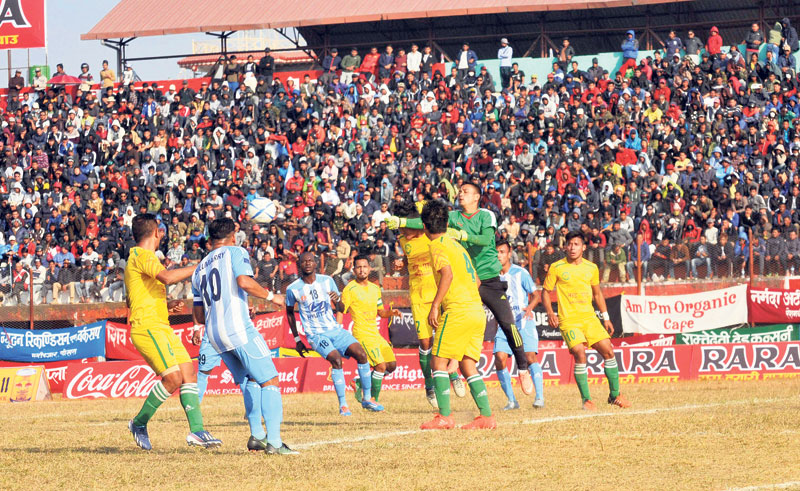 Nepali international Sujal Shrestha and Anil Gurung netted two goals each for MMC while Dipak Rai hit back the consolation for Dharan. The A division outfit will take on the winner among CMG Club Sankata and Farashganj SC in the semifinal on.

MMC, one of the most successful teams of the tournament with four trophies under its belt, took the match under control from the beginning and made the breakthrough in the 33rd minute. Sujal headed from the zone in a long cross of Anil, a local of Pokhara.

Anil doubled the tally eight minutes in a spectacular fashion for MMC which has made to the final for nine times. He collected African player Olawala Afeez’s cross inside the zone and dribbled past Hem Gurung before firing at the target.

MMC added to the misery of Dharan during an hour mark after Anil headed Rohit Chand’s cross to net his second individual goal and third for MMC. Three minutes later Sujal netted at an open post after Dharan’s goalie Purna Chemjong was beaten in a cross supplied by Anil. Sujal was later declared the-man-of-the-match.

Dipak hit back the consolation for Dharan in the 73rd minute. Earlier, Dharan was unfortunate in the 13th minute after Nishan Limbu’s scorcher crashed on the crossbar before sailing out.

Meanwhile, Bikram Lama’s 19 minute strike for MMC from outside the zone was hit the woodwork after Dharan goalie Purna punched it.

Dharan coach Subash KC pointed out the injury of his players as the reason for his side’s poor performance. “MMC has a set team while our team is assembled from various teams,” said KC. “We conceded goals after the opponent players were left unmarked. Our team had joint training only after arriving Pokhara.

MMC coach Tshering Lopsang said that his side was ensured of victory after getting score on time. “We were near to win in the first half and the players came up with more effort after the break which helped to widen the goal difference,” Lopsang said.