Dr Baburam Bhattarai not to contest House of Representatives elections

KATHMANDU, Oct 3: Former Prime Minister and Nepal Samajwadi Party  Chairman Dr Baburam Bhattarai has said that he will not contest the upcoming House of Representatives elections.

Bhattarai, who won the Constituent Assembly elections of 2064 BS and 2070 BS and the House of Representatives elections of 2074 BS, has said that he will not quit politics even if he does not contest the elections.

In his Facebook status, he has written that he will continue to work for the party and serve the people despite not contesting the elections. “Not contesting in the election does not mean leaving politics! Some people may think/say this without knowing it. However, those who do politics from power to power and from election to election may say the same,” he wrote.

Similarly, he has also written that he has contributed to the long-term development of Gorkha by winning elections three times and has built physical infrastructure.

Thanking the Gorkha voters, he wrote, “During my tenure, basic physical and social infrastructures have been built for the far-reaching development and prosperity of Gorkha. However, some projects that have been started are yet to be completed. To complete the remaining projects and to bring production and employment oriented plans and programs on the foundation of those infrastructures, I will continue to actively contribute even if I am not in parliament to make historical Gorkha a model development center in the country.” 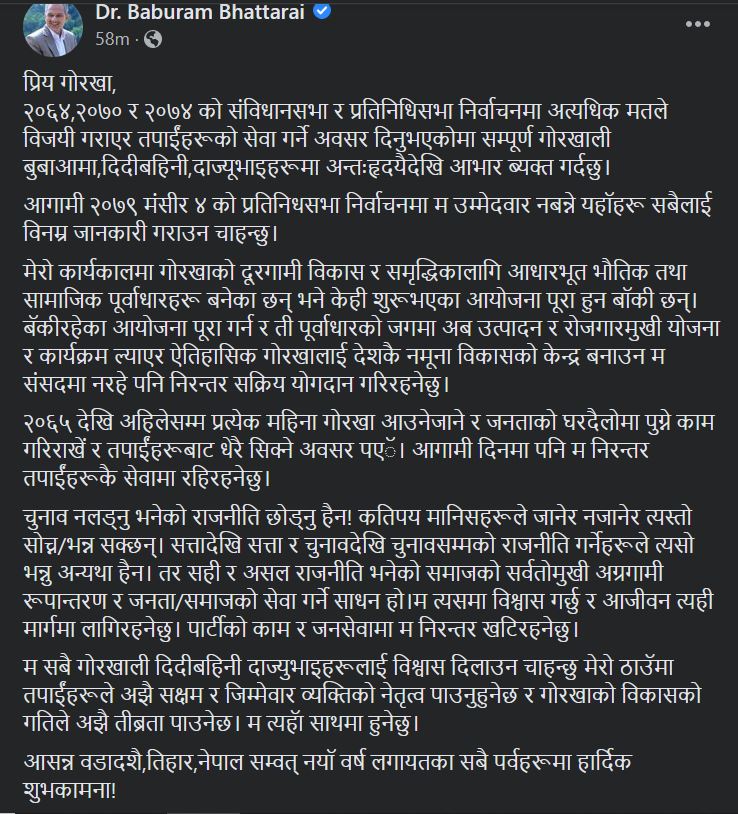 KATHMANDU, July 14: At a time when Janata Samajwadi Party (JSP) is on the verge of splitting, the two factions... Read More...