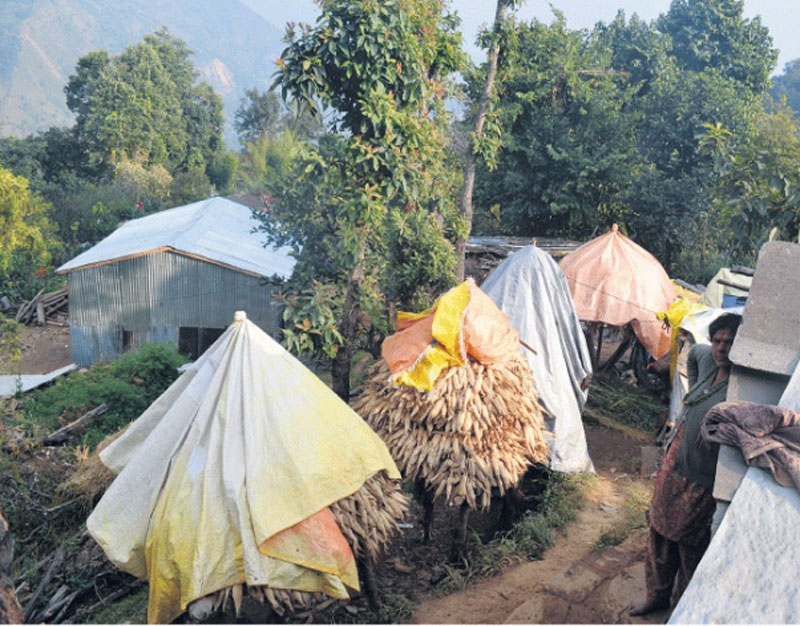 One and a half years is a really long time for rebuilding. No wonder earthquake survivors feel like it’s been ages
One and a half years after the devastating earthquakes destroyed their settlements and ravaged their lives, thousands of earthquake survivors in Sindhupalchok district, which is but a few miles from the country’s capital, are precarious as ever. They have to bear with freezing cold at night, with dew dripping through the corrugated tin roofs they have built to protect themselves. They shiver from the cold for the whole night, go to till their land for the whole day, and return to same shoddy shelters to re-experience hell. For the earthquake victims of this district, it is the daily routine.

“My one year old daughter gets up in the morning with swollen eyes due to extreme cold,” says Buti Tamang, a resident of Marming VDC, one of the worst affected places in the district. “I have received Rs 50,000 for rebuilding from the government. But this is not enough to rebuild my house. I don’t have any other income.”

Tamang is only just one of the thousands of earthquake victims in the district who are putting up in makeshift tents and those who have stopped trusting the government to take care of them.

One and a half years after the earthquakes, reconstruction should ideally have been complete. But houses destroyed by earthquakes remain as they were back in 2015. The first tranche of the promised reconstruction funds have just been made available; the quake victims don’t know when the second or third installments will come through.

The irony is they cannot rebuild houses on their own because they don’t have enough money. But it could be years before they get all of the promised grant of Rs 300,000.

Even those who can afford to rebuild without the government grants are sitting idle. ‘If donors are going to fund reconstruction, why should we spend our own money?’ they ask.

So the victims look back and curse their fate. “Only if the earthquakes had not come, our world would be a different place today,” shares Buti Tamang.

As a development worker, I have witnessed many quake victims become afflicted with post traumatic stress disorder. They suffer from insomnia, hypertension, loss of appetite, depression and hopelessness. Many have taken to alcohol and tobacco; some have even attempted suicide. “It would have been better if I too had died along with my family. Life has become more difficult than death,” one victim shared.

If they practiced yoga or meditation, it could perhaps help them come to terms with their painful past. But if they do so, who will take care of their livestock and family farms?

If they shared problems with each other, it could also help them cope. But who would the victims share their experiences with when all are battling with the same fate?

Despite this, a faint ray of hope keeps them alive. The hope that government grants will come, sooner or later. But what will happen when this hope is extinguished?

The only way to keep this hope kindling is by expediting reconstruction and show that the state cares about them in this time of need.

India is suffering from the worst water crisis in its history with 600 million people facing acute water shortage, a... Read More...

BRISBANE, Nov 26: A pulsating Ashes opener that had promised a grandstand finish will more than likely end early with... Read More...

Infographics: Venezuela on brink of bankruptcy

Dahal is guilty in SPP: UML Chairman Oli
55 minutes ago