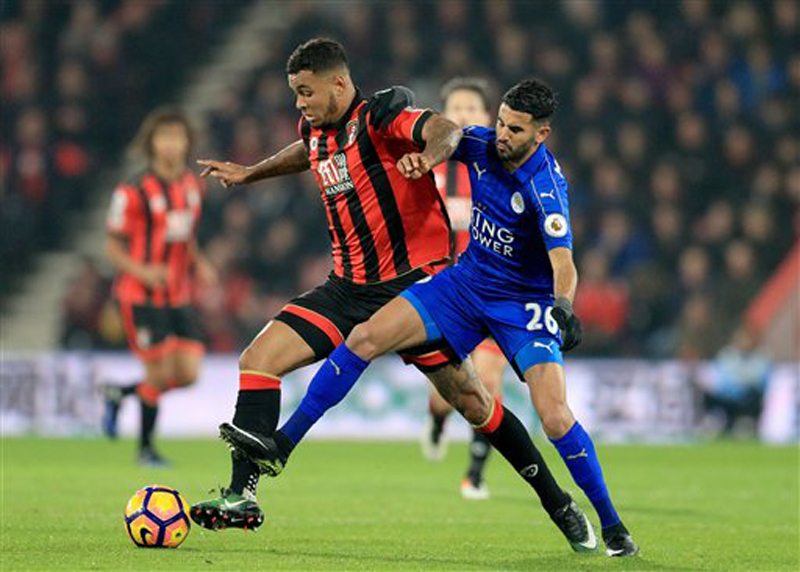 LONDON, Dec 19:  Eddie Howe's reputation as one of English soccer's brightest coaches was already soaring when the Bournemouth manager's credentials were further championed in an unusual public arena.

In a diversion to a recent parliamentary hearing into soccer's integrity issues, a legislator suddenly advanced the case for Howe to become England coach.

"Someone like that," English Football Association chairman Greg Clarke responded, "you don't want to burn by overexposing them too early."

Howe, though, can't escape exposure when he's achieving remarkable results with his small club in a southern seaside town, and operating with moderate resources compared to the rest of the Premier League.

Liverpool found that out to its cost two weeks ago when it surrendered a 3-1 lead to lose 4-3 at Bournemouth's tiny ground with a capacity of around 11,000.

Although the 39-year-old Howe was overlooked for the England vacancy, his time will undoubtedly come on the international stage. For now, the big time for Howe is Bournemouth — an unthinkable proposition when he was coaching the team in the fourth tier in 2010.

With a turbo-charged ascent through the English soccer pyramid, Howe steered Bournemouth into the Premier League in 2015, while remaining faithful to his brand of attacking football.

And with a 1-0 victory over defending Premier League champion Leicester, Leicester briefly climbed Tuesday to eighth place — the highest the club, which was formed as Boscombe St. John's Institute in 1890, has ever been.

Securing a third consecutive season in the top flight looks less of an ambition and more a realistic proposition for a team which plays in a town previously better known as a sleepy retirement resort.

Players like winger Mark Pugh have been on the incredible journey, joining the team in 2010 and scoring the only goal against Leicester.

"He has the qualities that we look for in a Bournemouth player," Howe said of Pugh. "He works hard and he's technically excellent."

As a player in the 1990s, Howe joined teammates on the streets of Bournemouth with buckets collecting cash to keep the club alive. Now Bournemouth is owned by Russian businessman Maxim Demin and American investors Matt Hulsizer and Jay Coppoletta, but the club retains a strong English identity.

Howe is one of the 20-team Premier League's four English managers, and eight of the starting 11 against Leicester were English. When the paucity of homegrown talent is a concern domestically, Bournemouth is a shining light which explains the praise for Howe in the Palace of Westminster.

Contrast Bournemouth with two teams in action at the Etihad Stadium on Wednesday. Manchester City, champion in 2012 and 2014, and Watford each fielded only one homegrown player.

Bournemouth is providing the platform for midfielder Jack Wilshere to reboot his career with the regular starting place he couldn't hold down at Arsenal. Compared by some with Xavi and Andres Iniesta before injuries took their toll, Wilshere is showing his quality on the ball again.

"His technical ability is second to none," Howe said. "I think he is so comfortable he's made us a totally different team with the ball."

Bournemouth's next test on Sunday is a derby match against south-coast rival against Southampton. Only goal difference is keeping Bournemouth behind Southampton, which has just enjoyed its first foray into the Europa League after expertly balancing the selling of players for big profits with finding equally valuable replacements.

There's now talk at Bournemouth of emulating Southampton by qualifying for Europe for the first time.

"The club's come so far so quickly, sometimes it's maybe nice for others to sit back and enjoy the position we're in," Howe said.

Here are some other talking points in the Premier League this weekend:

Third-placed Arsenal retains a one-point edge over Manchester City despite the Gunners' 14-match unbeaten run in the league being ended by a late collapse at Everton on Tuesday. City is concerned heading into Sunday's game about the severity of a knee injury sustained by midfielder Ilkay Gundogan against Watford.

A seventh defeat in nine league games has left Alan Pardew's future as Palace manager looking even more precarious. Fresh from hosting Manchester United, Palace on Saturday welcomes a Chelsea side on a 10-game winning run in the league that has seen the leaders only concede twice.

Man beaten to death in Dhanusha
53 minutes ago