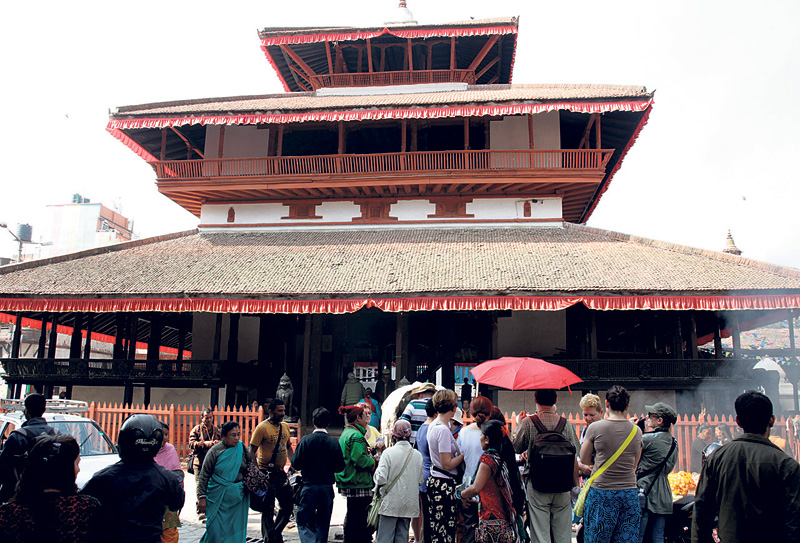 KATHMANDU, Dec 9: In recent excavations at Kasthamandap Temple next to Kathmandu Durbar Square, a group of researchers found the fourth saddle stone under the foundation level of the collapsed temple. The temple collapsed during the massive earthquake last year.

They had found three of the saddle stones that supported the wooden pillars of the temple last year. With the finding of the fourth saddle stone this time, the researchers have a better understanding  about the foundations of Kasthamandap, which is one of the key heritage sites in Kathmandu and a central attraction of the Durbar Square. Kasthamandap, which dates back to the 8th Century AD, is believed to have been built with the wood of a single tree.

Following the latest excavation, the researchers have inferred the possible reason for the temple collapse during the earthquake.

The researchers were taken by surprise when they found that the fourth saddle stone was fitted in a different way than the other three. It wasn’t fitted in the way it should have been.

“Three of the wooden pillars were fitted into the three separate saddle stones but the fourth pillar was not fitted into its saddle stone,” said Ram Bahadur Kunwar, spokesman at the Department of Archaeology, who was also involved in the excavation. Experts said this lapse happened during major renovations carried out some four decades ago.

The excavation was jointly conducted about a week ago by archaeologists from the Department of Archeology (DoA) and Durham University in the UK.

Kunwar said that it was because of this lapse that Kasthamandap Temple had been in a compromised condition. Previously they had thought the fault was with the lack of maintenance but the excavation uncovered the fault in the foundation itself.

He said another fault was that the temple joints weren’t properly maintained. Lack of timely maintenance of the wooden joints and the faulty fitting of the fourth pillar could be the reasons behind the temple’s destruction by earthquake.

“The lesson for us is that fixing such small faults in time could save our historical monuments from damage in earthquakes,” Kunwar told Republica. “We find similar faults in several other monuments that couldn’t survive the earthquake.”

It has been over 18 months since the earthquake devastation and the country has just entered the reconstruction phase for the historical monuments. As of now, the DoA is carrying out reconstruction and renovation at over 60 monuments out of the total of 132 monuments which were completely destroyed during the earthquakes.

Some of the experts are agreed that most of the cultural properties that collapsed during the quakes just lacked timely maintenance. Had there been better maintenance, the destruction would not have been on this scale.

Archaeologist Bishnuraj Karki said renovating and reconstruction of monuments shouldn’t be taken lightly. “Before starting the task we need to thoroughly study the art and culture of the monument. It’s not only about rebuilding the structures, but also preserving historical art and culture,” he added.

Karki informed that the government had renovated the 55-Window Palace of Bhaktapur Durbar Square about a decade ago, using traditional materials and techniques.

“The 55-Window Palace is one of our recent conservation works which wasn’t damaged during the earthquake,” former joint secretary Karki said.

He said most of the wooden joints at Kasthamandap Temple were in a poor condition. “Most of the collapsed monuments had the same fault in the wooden joints,” he said. “As we are preparing for the reconstruction and renovation of dozen of monuments, we should take this issue seriously so that we can save the monuments for a long time.”

The government must make it mandatory to thoroughly study the condition of the structures meant for renovation. “It should be done within at least 30 to 40 years after construction or renovation,” he said.

Expressing herself through art

Amidst all the artists who are taking to social media to display their work and gain recognition, illustrator Untamed Anatomy... Read More...

KATHMANDU, June 23: A committee responsible for Kasthamandap reconstruction has decided to postpone the reconstruction work by a month citing the... Read More...

KATHMANDU, April 25: The Supreme Court (SC) has ordered the government to halt any types of investigations on DIG Nawaraj... Read More...