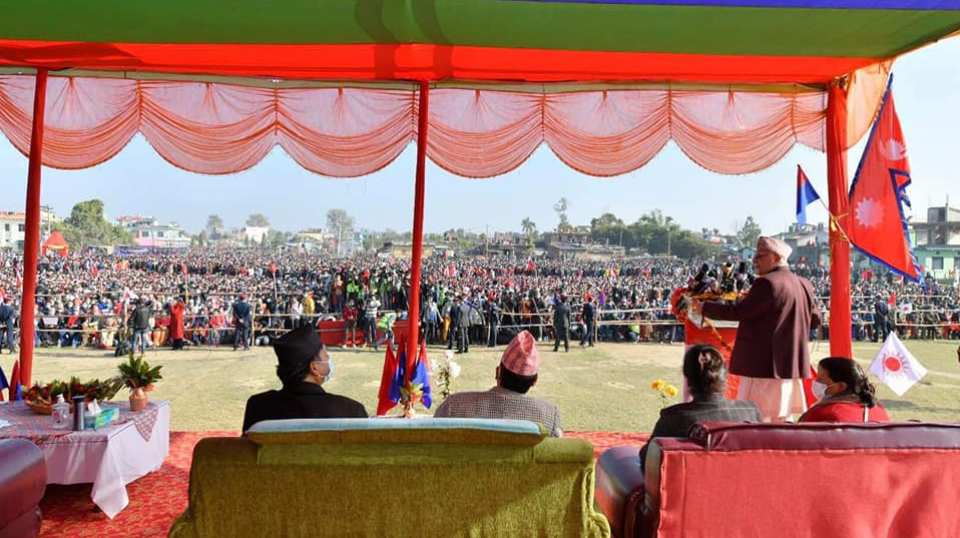 PM Oli addressing a mass gathering organized by his faction of the NCP in Dhangadhi on Friday afternoon.Photo courtesy: Surya Thapa, the prime minister's press advisor

“How can a person who even served a jail term for 14 years for the sake of republicanism, be anti-republic and anti-federalism?" asked Oli.

DHANGADHI, Jan 8: Prime Minister KP Sharma Oli on Friday said that he is not against federalism and republicanism.

Arguing that he was jailed for 14 years for the sake of republicanism, Prime Minister Oli, who is also the chairperson of the rival faction of the ruling Nepal Communist Party (NCP), said he would never go against the hard-earned federalism and republicanism.

"As the country is now witnessing a crisis-like situation, some people are trying to portray me as anti-republic and anti-federalism. How can a person who even served a jail term for 14 years for the sake of republicanism, be anti-republic and anti-federalism?" asked Oli, while addressing a mass gathering organized by his faction of the NCP in Dhangadhi on Friday afternoon. 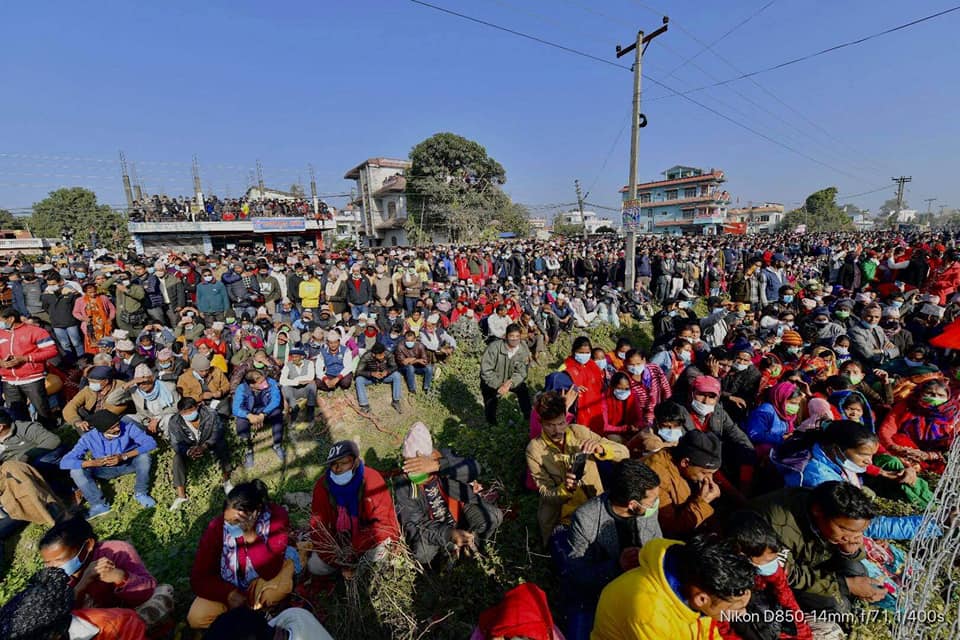 Oli's statement comes at a time when various political parties including NCP's Dahal-Nepal faction and Nepali Congress are taking to the streets, arguing that the move of Prime Minister Oli to dissolve the lower house of the federal parliament was an attempt to sabotage federalism and republicanism. The agitating leaders of the NC and the opposition parties have demanded reinstatement of parliament calling Oli's move ‘unconstitutional’.

Addressing the mass gathering, the prime minister claimed that his act of dissolving the House of Representatives is constitutional. "I urge those who are opposing my decision to dissolve parliament to read between the lines of the constitution instead of making a fuss on it. Don't judge the things politically," he said.

Oli claimed that he recommended the dissolution of parliament to get a fresh mandate from people as the country was forced to waste time for nothing due to political wranglings within the ruling NCP.

"I am the prime minister who represents 64% of the people in the country. I decided to recommend the dissolution of parliament after I did not see any alternative to it," he said. The prime minister also ruled out the possibility of the reinstatement of the dissolved parliament.

Prime Minister Oli also claimed that the midterm elections will take place on scheduled dates—April 30 and May 10.

Prime Minister Oli recalled that people across the country had firmly supported him when he opposed the Indian blockade in 2015, and are now supporting his government's ongoing efforts to establish new border points and road connectivity with China. 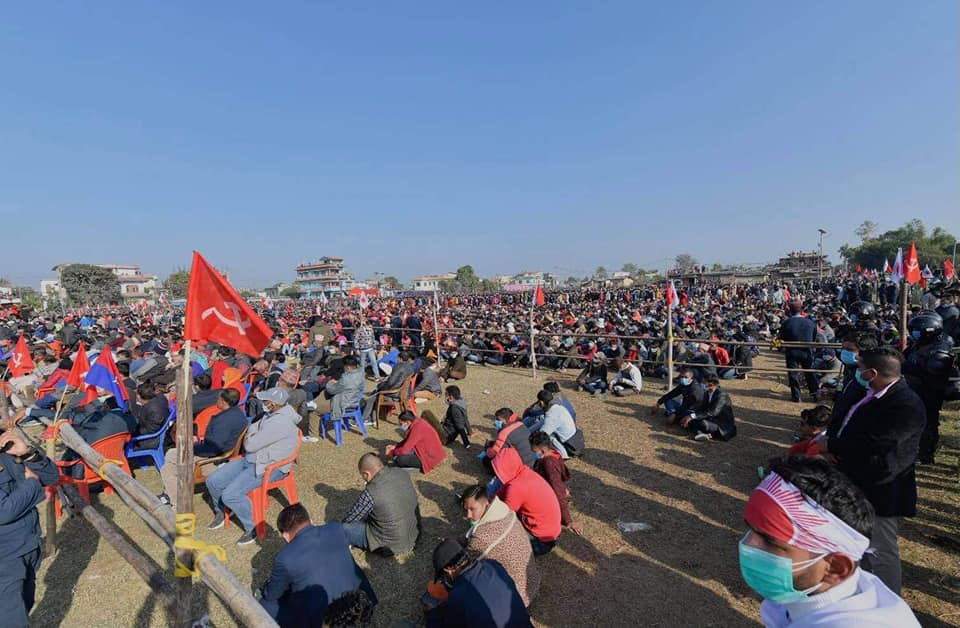 Expressing anger toward the ongoing protests by the Dahal-Nepal faction of his party, Oli said "Some people are restless now because they did not like the government's act of publishing a new political map incorporating Nepali territories which had long been occupied by India. In fact, they are fake nationalists and power mongers," he argued.

On a separate note, the prime minister said that his government is working to make the country self-reliant. "Now, we are working to establish more industries. We want to enhance domestic production and export goods to other countries thereby we can have good foreign currency reserves," Oli said. 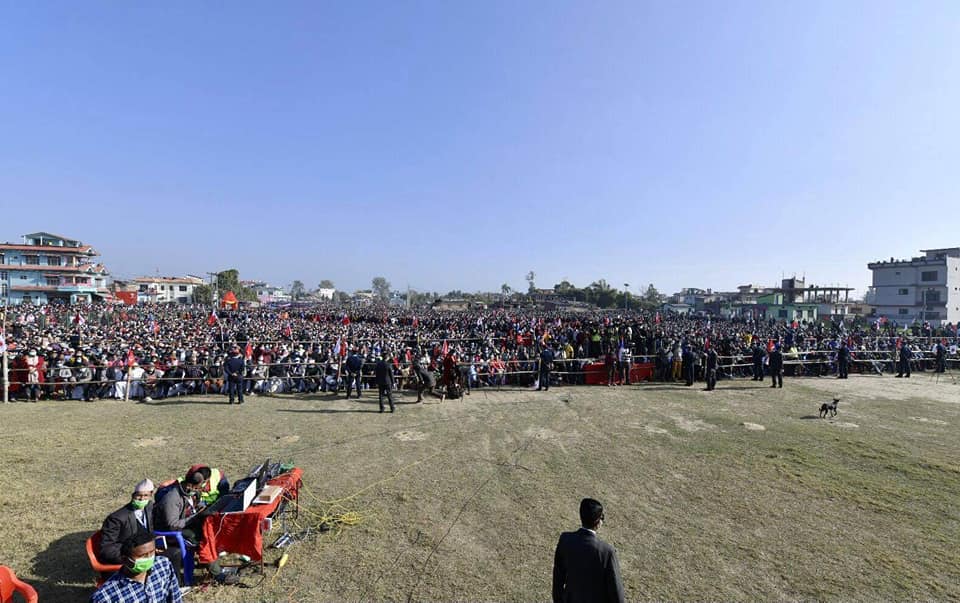 Prime Minister Oli said that the government is working to generate employment opportunities at home. "We also want to modernize our agriculture," he said.

Oli visited Sudurpaschim Province for the first time after his party witnessed a vertical split as months-long intraparty rift further deepened due to the government's unprecedented act of dissolving parliament and announcing dates for the midterm elections.

Bagmati Province spent only 15.78 percent of the allocated budget in the first half of current FY
7 minutes ago