KATHMANDU, Dec 24: Government doctors across the country have threatened to resign in mass if their 14 demands were not addressed by the government. They have however not issued any deadline for fulfilling the demands.

“The state is discriminating against us,” said Dr. Dipendra Pandey, the president of the Government Doctors’ Association of Nepal (GODAN). “If the government does not address our demands, we will resign in mass,” he added, without issuing the last deadline for fulfilling their demands.

In the list of their demands, the doctors have objected to the recently promulgated Civil Servants Adjustment Ordinance and the appointment of a non-doctor as health secretary. They have also demanded the appointment of vice-chancellor at the National Academy of Medical Sciences (Bir Hospital) among other things.

Dr. Pandey further said that the doctors have just launched the protests forwarding their 14 demands to the authorities. “We visited Prime Minister’s Office today [Sunday] and submitted our demands to the prime minister’s chief adviser Bishnu Rimal as the prime minister was not available,” Dr. Pandey added. “Earlier on Friday, we handed over the list of our demands to Deputy Prime Minister and Minister for Health and Population Upendra Yadav.”

According to GODAN, there are 1,600 doctors working in government health facilities across the country. According to the Nepal Medical Council (NMC), more than 21,000 doctors registered with the NMC in Nepal.

Dr. Pandey said that a medical doctor is paid only Rs 35,000 in monthly salary. “Our salaries and benefits must be increased while addressing all our demands,” Pandey said. “We will continue our protests that will include sit-ins and demonstrations. However, we never intend to deprive the patients of treatment,” he said. “But if the government does not listen to our demands, then the last thing we will do is resign in mass,” he added, saying that their meeting being held on Monday will come up with a protest plan. 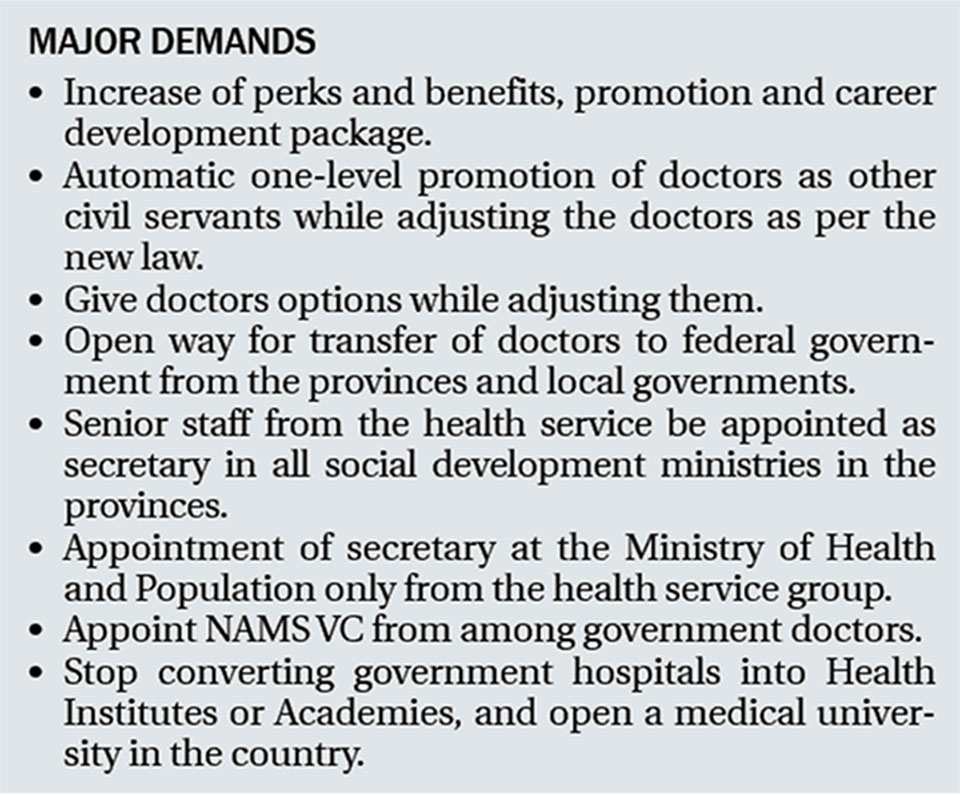