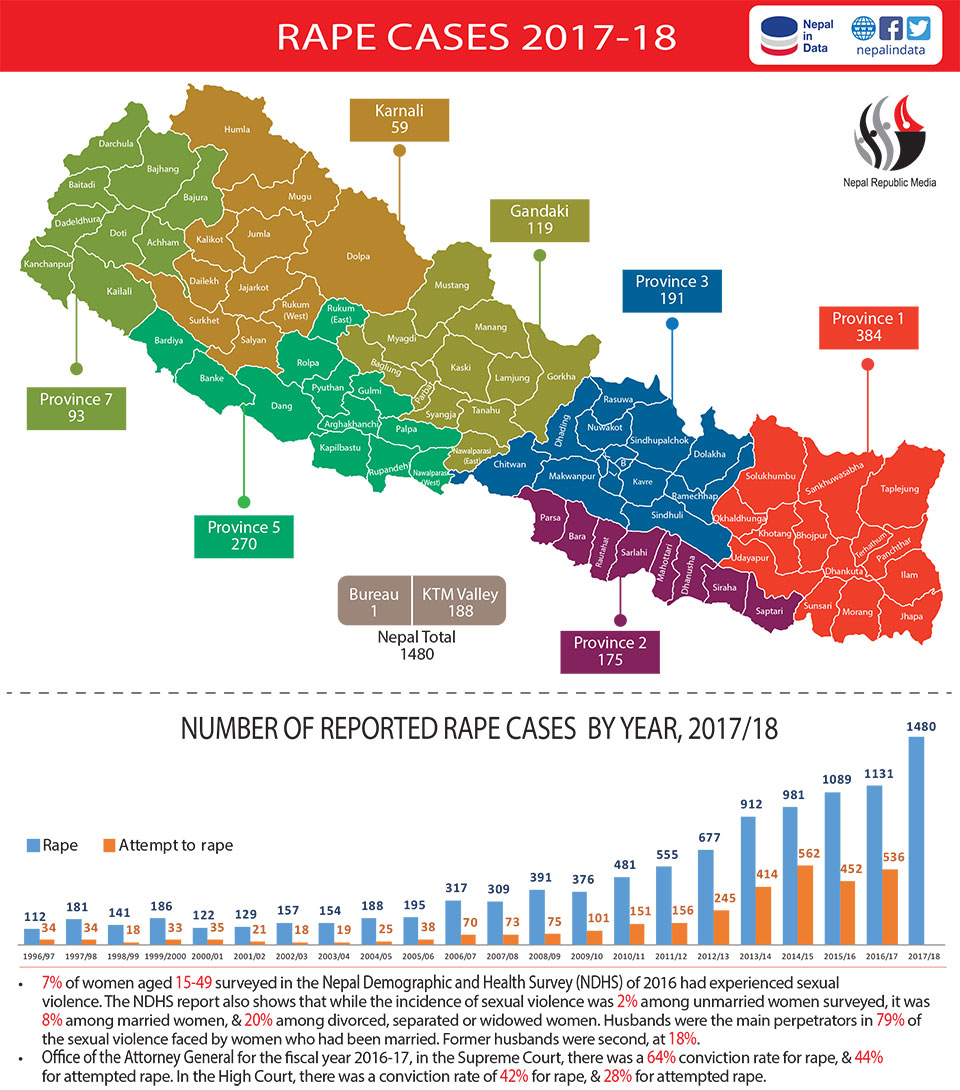 KATHMANDU, Aug 9: Amid public outcry against the increasing incidence of rape being reported from across the country, Nepal Police data on the subject is sure to be shocking. On an average, four rapes have been reported every day and 120 every month in the fiscal year 2074/75 BS, according to the data. That's 1,480 rape cases a year.

The figure is almost twice what Republica reported in a news story back in February. The latest data from police shows that rape cases have shot up from 78 to 120 every month.

The current data shows that Province 1 continues to have the highest number of rapes: 384. This was followed by Province 5 (270). The lowest was in Province 6 (59). In Kathmandu Valley, 188 rape cases were filed.

While the numbers are alarming, the Women’s Directorate of Nepal Police believes that the numbers could be more. “Many cases go unreported, largely because it is a taboo subject and victims and their families feel ashamed to open up. This is especially true in the central terai and remote hills where access to justice is limited,” Laxmi Pandey Khanal, inspector at the Women's Directorate of Nepal Police, said. Apart from the cases being unreported, there also are attempts to reconcile between the perpetrator and the victim’s family.

“The data shows that while the number of cases being reported is increasing due to awareness, the actual incidence of rape is also on the rise,” she said.

While the number of reported cases is on the rise and the courts also prioritize their adjudication, rape victims need to wait between four months to a year for justice, and this is largely due to procedural hurdles. As rape investigations and procedural delays are likely to be mentally and emotionally draining for the victims, the government provides them counseling, protection and other support for free.

“Rapes happen in private spaces where there is minimal witness. Hence, once a victim reports a rape, police start their investigations taking a handful of things into consideration, including victim's statement, symptoms and medical tests,” Ananta Raj Luitel, advocate at the Supreme Court, said.

Following their investigation and findings, police submit a report to a government attorney, who then registers a case in court.

The court allows a benefit of the doubt to the police’s findings and initiates its own re-examination, looking into confessions, medical tests, DNA tests and circumstantial evidence, to revalidate the police findings. This causes delay.

THE PSYCHOLOGY OF RAPE

Psychologists suggest that in numerous cases they have encountered, a difficult childhood, trauma, a history of sexual abuse, lack of respect and difficult relationship with a mother figure are key factors.

While a difficult childhood can stem from numerous reasons, parents can detect harmful signs early. Such signs include a child’s disrespectful attitude towards women, portraying them sexually, agitation and aggression. “In all the cases that I have encountered, difficult childhood experiences has been the most common thread,” Kunwar shared adding that suppression of the resulting emotions led to expression of violence toward the weaker, usually children below 16.

Narendra Singh Thagunna, a lecturer in psychology at Tri-Chandra Campus, adds that people with compulsive behavior also tend to become perpetrators. “While power and anger are contributing factors, that is not all,” Thagunna said, adding that according to various studies, most rapists force victims into sex not for power or control but because they want sex.

A 2010 research project carried out by Rachel Jewkes of the University of Witwatersrand in South Africa supports Thagunna's views. The research, which included random sampling of men aged 18-49 showed that boredom and a sense of sexual entitlement were common elements in rape, and alcohol often played a part.

Research over the past three decades suggests that several mental health issues underlie sexual violence, particularly rape. There may be 'organic brain damage and learning disability disorders associated with congenital or acquired brain damage,' according to research on mental health assessment of rape offenders carried out by Dr. Jaydip Sarkar at the Institute of Mental Health in Singapore.

In schools across the country, the topic of sex is broached but both teachers and students find it 'inappropriate' to delve deeper. Questions are rarely asked and seldom answered. At home, the topic is rarely raised. Our socio-cultural background means self-imposed restrictions on talking about sex.

Psychologists and media analysts suggest it is high time parents started to talk about it, learned how to answer questions and broke misconceptions. “Parents often say 'you will know when you grow up,'” Kunwar said.

The internet provides diverse content, including pornography, which accounts for 30 percent of internet traffic globally.

The boom in handheld devices in the last decade or so and the availability of wireless internet and cellular data have led to the evolution of a 'bedroom culture', Ujjwal Acharya, a prominent social media analyst, said. In 'bedroom culture' individuals browse internet content, especially content that cannot be viewed with others. This leaves individuals vulnerable to pornographic content and sexual communication and sometimes leads to curiosity, sexual fetishes and violent sexual acts.

Across the country, internet penetration has climbed to 61 percent from a million users in 2010. Over 6,581 new users are connected to the internet every day. A 2017 Management Information System (MIS) report for Nepal Telecommunications Authority shows that 16,186,759 people in the country had access to internet/data services as of mid-July — an increment in internet users by 2,402,141 compared to the internet penetration of 13,784,618 recorded till mid-July, 2016.

At the current rate, internet penetration is likely to range between 80-90 percent in the next five years, Acharya opined. “While internet usage has increased, there is little awareness among users about safe browsing.” If Acharya is right, internet induced violence, rape and sexual harassment are likely to escalate.

KAPILVASTU, May 21: A differently-abled woman was sexually abused at Maharajgunj Municipality-6 in Kapilvastu. ... Read More...

Why a deadline for sexual assault victims to get justice?

KATHMANDU, May 21: It is only fair and rational to think that the deadline for justice should be when the... Read More...

KATHMANDU, May 21: Sakela, the festival of Kirant Community (Rai, Limbu, Yakkha, Sunuwar), is being observed in various places in... Read More...